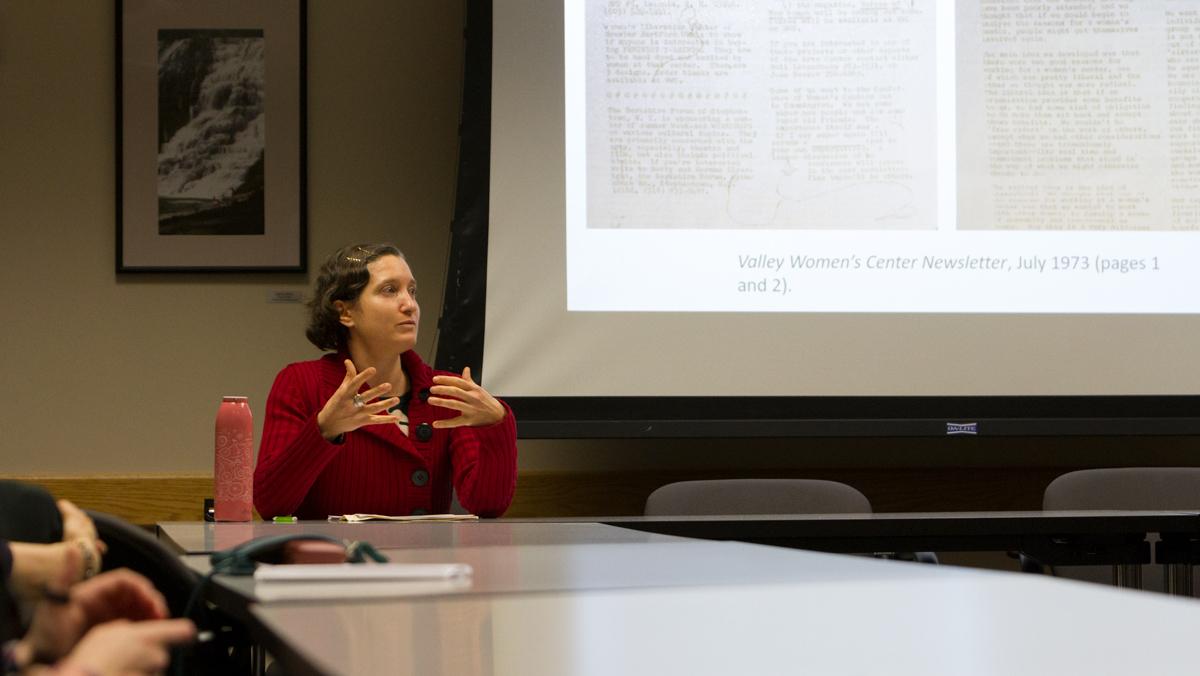 Agatha Beins, associate professor at Texas Woman’s University and author, discussed the large contribution newsletters and newspapers made to the feminist movement in the 1970s on March 29.

The Ithaca College’s Women’s and Gender Studies program hosted the talk in the Ithaca Falls Room in the Campus Center, where Beins presented findings from her latest book, “Liberation in Print: Feminist Periodicals and Social Movement Identity.” Approximately 15 people attended the event.

During the 1970s, many women wished to be part of the women’s liberation movement but were given little access to opportunity. It was important for women to connect during the movement, Beins said, and periodicals gave them the platform to do so.

“Feminist newsletters and newspapers published during this time put feminism into print,” Beins said. “This allowed readers to connect with feminism in the streets, as well as many other places.”

Beins discussed some of the issues with feminism in the early 1970s, including the lack of a space where information could be centralized. Women could read about movements in national newspapers but had no idea where in their own cities and towns they could participate, she said.

The women’s liberation movement did gain some national attention in the 1970s, and Beins gave the example of the Women’s Strike for Equality. This specific strike received visibility in mainstream media, with coverage from The New York Times, the Los Angeles Times and The Washington Post, but despite this coverage of feminism, the movement still remained fairly inaccessible, Beins said.

This is when localized “grassroots” periodicals became so vital, Beins said. She explained how local newsletters and newspapers provided women with information about local events for feminist movements, guiding them to where and when they could participate. Periodicals also published ways for women to practice personal feminism, with the discussion of topics such as reproductive rights or a woman’s right to keep her last name. Periodicals also gave women opportunities to contribute, as readers were able to write in personal stories and suggestions, Beins said.

Beins called periodicals a “map for the feminist movement.” These newsletters also introduced women of the time to the scope of the term. Feminism wasn’t just about politics, Beins said, but about a woman’s personal life as well.

“Personal is political, and periodicals displayed this,” Beins said.

Senior Hannah Blanchette said she was surprised that the discussion mostly surrounded grassroots feminist periodicals, as opposed to bigger newspapers.

“I came here thinking it was going to be about bigger print culture, so hearing about local periodicals and the different connections they made in the feminist movement was very interesting,” Blanchette said.

Beins also compared 1970s periodicals to the use of social media today. Now that the internet is so accessible, the feminist movement is much easier to follow, she said. Members of the movement have access to feminist websites and blogs at all times, and this has altered the movement immensely since the 1970s, Beins said. Since information about the movement is now more accessible, there is far more involvement with a younger demographic.

“The internet, as a different kind of form, makes certain kinds of content production difficult,” Beins said. “But if we think about the relationship between form and content, we can also find echoes between the ways periodicals in the 1970s resemble some of the manifestations of writing or activism online.”

Freshman Chanel Courant said she enjoyed the talk, as she felt discussing the subcultures within feminism was important.

“This topic isn’t something that’s addressed often,” Courant said. “It’s not something that there’s a strong focus on. I think it’s important to know your own history as a feminist.”