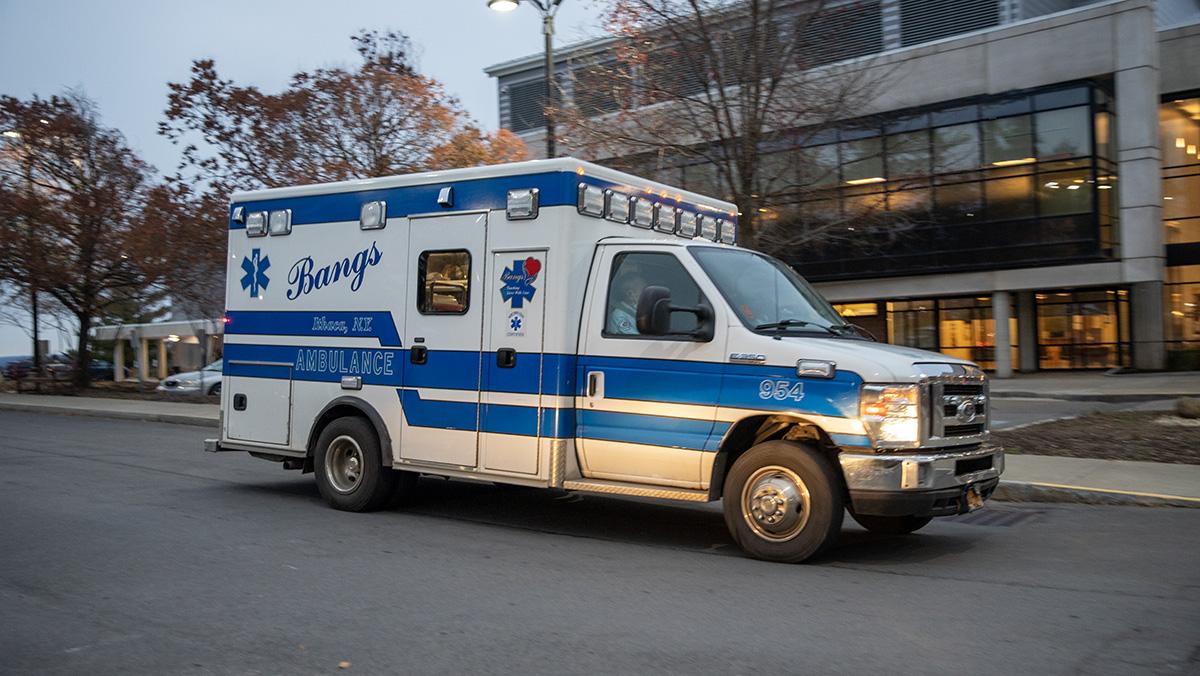 Brendan Iannucci/The Ithacan
Bangs Ambulance will move forward with the unionization process after members of the company voted Oct. 9 to form the union.
By Olivia Stanzl — Staff Writer
Published: November 16, 2022

Bangs Ambulance will move forward with the unionization process after members of the company voted Oct. 9 to form the union.

Meghan Bangs Teeter, human resource manager at Bangs Ambulance, said via email that 22 employees voted in favor of the union and 20 voted against it.

Robert Royer, paramedic at Bangs Ambulance, who has worked with the company for eight months, said the unionization efforts were formed in the hopes of fixing three main goals: provide better patient care, improve provider safety and build out emergency medical services (EMS) as a viable career.

The union’s organizing committee received guidance from both the Civil Service Employees Association (CSEA) and the Tompkins County Workers Center (TCWC). Pete Meyers, coordinator for TCWC, said the TCWC made its space available once a week for the Bangs organizing committee to meet at and worked in harmony with CSEA to provide strategy to the workers who wanted to organize.

“TCWC played an intimate support role [by] meeting with the workers ongoingly, both separately and with the union they chose to affiliate with, CSEA, and helping to strategize and publicize their efforts,” Meyers said.

The American Ambulance Association conducted its fourth annual survey, which found that EMS agencies experience a full turnover of staff every three to four years. The study collected data from 119 EMS organizations across the country.

On October 1, 2021, the American Ambulance Association wrote a letter to leaders of the House of Representatives and Senate that said the nation’s EMS system is experiencing a “crippling workforce shortage” that needs urgent attention by Congress. The association said the pandemic brought this problem to the forefront, though it had been building for decades.

Teeter, who has worked at Bangs ambulance since 2006 and is also on the board of directors, said the company currently employs 77 people; 30 are full-time staff and 47 are part-time/per diem staff members. Teeter said hours for an individual employee can range from 0–80 in a single week, and said that in October 2022, full-time employees averaged 47 hours a week and part-time employees averaged 13 hours a week.

While the Federal Motor Carrier Safety Administration regulates hours of service for property-carrying and passenger-carrying truck drivers to a 30 minute break for every eight hours of cumulative driving, EMSs do not have a drive time requirement.

A 2020 study published in the National Library of Medicine found that EMS professionals experienced low levels of personal achievement and a high measure of emotional exhaustion and depersonalization.

Royer said the staff typically has one to four out of town transports, which can include hour-long trips to Syracuse, or can even travel as far as Westchester, which is over four hours away.

“A lot of these trips come out in the evening shift or the overnight [shift],” Royer said. “So we will send trips out on five, six hour round trips regularly to Rochester after a crew has already been on for about 16 hours running calls continuously, with no ability to do paperwork because we are so busy and so short-handed.”

According to a study published in 2021 in the Journal of Affective Disorders, EMS personnel are three times more likely to experience mental health problems like depression and posttraumatic stress disorder when compared to the regular population because of the daily stressors that come with being an EMS worker.

Royer said he has no access to mental health services with his health insurance.

“I have been on massive car wrecks where people’s arms and legs are noodles, and they’re bleeding out,” Royer said. “And we’ve had child CPR, really bad mental health situations — we have a huge opioid epidemic going on. Really, we just absorb the brunt of basically most of society’s grief and misery.”

Teeter said that because Bangs Ambulance is a private company, it does not typically receive government funding. Instead, the organization relies on people and insurance companies to pay ambulance bills. But, because ambulance transports are a surprise event, Teeter said many people are not prepared to pay for the service.

“Due to this, we write off a significant amount,” Teeter said. “In 2021, we wrote off 5.8 million in unpaid ambulance transports. Throughout the pandemic, Bangs Ambulance saw a 20% decrease in our call volume. We suffered an incredible loss in revenue and relied on governmental programs to sustain operations throughout this period.”

Health Affairs published a 2020 research article that said out-of-network ground ambulances in the U.S. accumulate $129 million each year. A 2022 analysis by the Kaiser Family Foundation found that 23 million people owe medical debt; 11 million owe over $2,000 and 3 million owe over $10,000.

Teeter said that despite the financial losses the company experienced, it never laid off any employees or cut employee hours or benefits. She said Bangs even continued to provide regular pay increases and additional bonuses. Teeter said the staff at Bangs Ambulance’s passion and dedication was evident during the pandemic.

“Our staff served on the frontlines of this pandemic; they never wavered in their dedication to care for our community,” Teeter said. “We watched people die from this virus; we were scared, but we continued to show up. We transported some very sick patients; we watched as their grieving family members said goodbye while we all knew it would likely be the last goodbye they would share — but we continued to show up.”

According to a Reuters article, 20% of the 4,500 ambulance workers in the New York City area were out sick in the beginning of the pandemic, despite receiving a record-breaking amount of ambulance calls.

Royer said the pandemic changed what first responders need from their employers in order to continue doing their job safely and effectively, which is why the union is necessary. Royer said it is necessary that the company works together to build a structure and system that leads to 20- and 30-year careers.

“It warms my heart just to think about it,” Royer said. “It’s a beautiful business, you know, even if we are dealing with misery every day. The privilege that we all get to help out perfect strangers is just everything.”

Editorial: Unionization of local workers is a cause for celebration