The Office of Public Safety has been cracking down on improper bike placement around campus in the past few weeks. 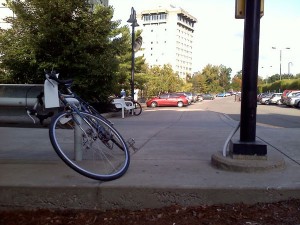 A bike was ticketed Monday by Baker Bridge near the Terrace Dining Hall. Public Safety is cracking down on bikes parked in improper places.

Environmental Health and Safety has issued 14 warnings on bikes left in hazardous positions across campus from Sept. 1 to Tuesday.

Tom Dunn, investigator for Public Safety, said a large number of these new reports are based on a change in procedure. He said he has been trying to be more proactive by giving more warnings instead of just confiscating bikes.

In previous years, only confiscated bikes were reported. This year, in an attempt to spread awareness of proper bike placement, all tagged bikes will be reported. The notifications are the same, but the reports will be more frequent, Dunn said.

Ronald Clark, a fire and building safety coordinator, said the confiscation notices are self-explanatory.
“The notices state where bikes shouldn’t be chained or fastened to, including any interior or exterior stairways, gas pipes, electrical equipment, or blocking any exits,” he said.

Public Safety gives owners 24 hours to remove their bikes before the bikes are confiscated. According to the notice, locks and chains will be cut at the expense of the owner.

Clark said a growing emphasis on environmental consciousness has led to an increase in bikes around campus, but few facilities, such as bike racks or designated parking spots, exist to back the increase up.
“If you go to Terraces, there’s no place besides a few bike racks underneath the buildings,” he said. “Circles have none.”

Last year, a couple of members of the Student Government Association tried to get lockers and bike covers installed around campus, but nothing was put in place. Currently there are no initiatives in the works regarding bikes, Rob Flaherty, vice president of communications for SGA, said.

“Obviously, we welcome students to bring their issues and suggestions to us,” Flaherty said. “But this isn’t something that we’re currently working on or that we’ve heard from the student body about yet.”

“A lot of bikes are very expensive and people don’t want to leave them outside,” he said. “We don’t like them on handrails on stairways. If someone’s coming down there and a handlebar’s sticking through and someone trips and falls, that’s a liability to the college.”

There are no fees for retrieval if a bike is confiscated.

Clark said bikes chained to all bike racks, railings under the Terraces, balconies and certain handrails are safe from confiscation.

On the other hand, bikes chained to lampposts, benches, stairwells, railings attached to stairwells and  locked on gas pipes at Terraces and sprinkler pipes at the Circle Apartments are fair game for confiscation.

“If we had to shut down the gas lines in emergency situations, we wouldn’t get there fast enough,” he said.

“If we’d get them on the sprinkler pipes, then the fire department can’t get to their hose connections.”