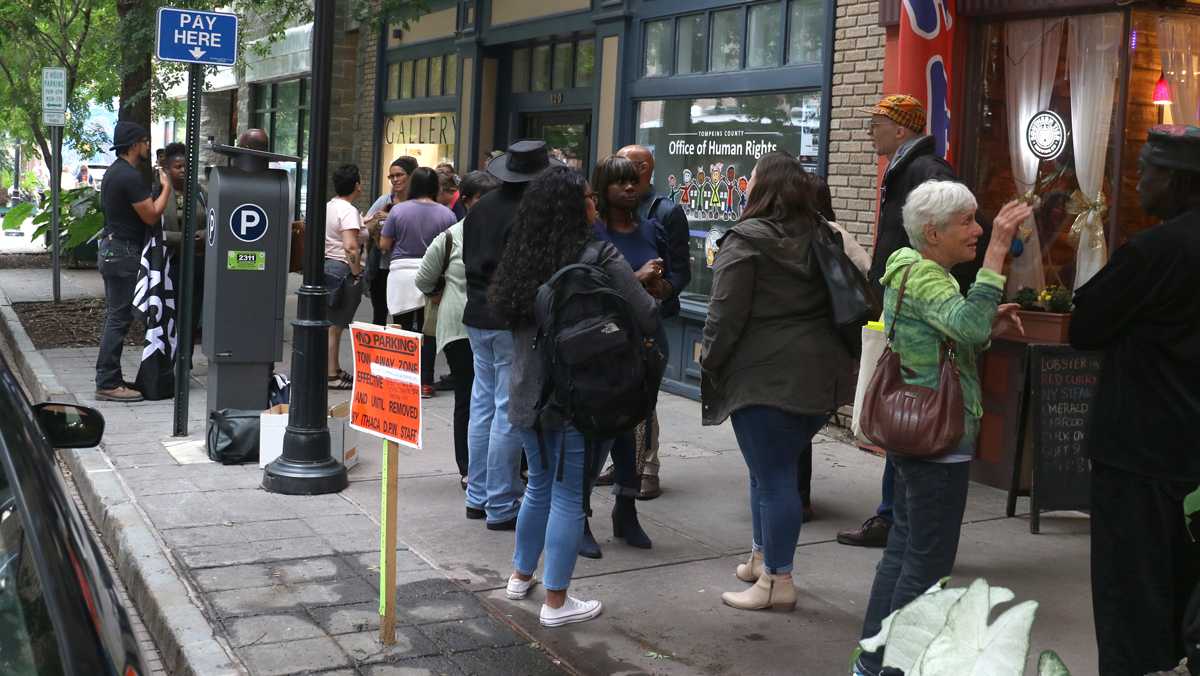 Elias Olsen/The Ithacan
Around 30 people gathered for the rally at the OHR across from the State Theatre in downtown Ithaca to listen to various speakers from Black Lives Matter Ithaca and show public support for the facility.
By Elizabeth Henning — Contributing Writer
Published: September 12, 2018

The Black Lives Matter group in Ithaca organized a rally for the Office of Human Rights (OHR) in Tompkins County on Sept. 11 to increase community awareness about OHR and attempt to preserve the office following threats that it will be defunded.

Around 30 people gathered for the rally at the OHR across from the State Theatre in downtown Ithaca to listen to various speakers from Black Lives Matter Ithaca and show public support for the facility. The rally was held to draw attention to the decline in funding from the county and the lack of support from the state for county-level offices, like the OHR, before the county budget hearing Oct. 1.

The OHR was established in 1963, and until 2008, it investigated and enforced claims of discrimination and other human rights violations filed by the residents of Tompkins County. Kenneth Clarke, the interim director of the OHR, said that, prior to 2008, the OHR worked under a memorandum of understanding with the state, which means the OHR had the jurisdiction to determine if probable cause existed for the human rights claims brought to the office, and if it existed, it began prosecuting the claims. The New York State Legislature let the memorandum expire in 2008. As a result, the state investigates probable cause on its own, without the OHR, for all of the state except New York City and Suffolk and Nassau Counties.

Since 2008, the OHR’s primary task has been to assist residents of Tompkins County to file claims using an electronic kiosk inside the office. Clarke assured ralliers at the end of the program that the OHR was not being closed or defunded.

Clarke replaced the former director Karen Baer after she was terminated for insubordination in April 2018.

Russell Rickford, a speaker with Black Lives Matter who organized the rally, talked about the importance of having a county-level OHR to protect human rights.

Rickford then introduced Rafael Aponte, a black farmer from Ithaca and a Black Lives Matter Ithaca organizer. Aponte described the work yet to be done in Tompkins County, saying the OHR is being “stripped away.” He said that because people of color are so used to dealing with individual acts of racism and discrimination, they are not able to address the systems that uphold racism and other forms of discrimination. The OHR gives residents a way to challenge discrimination through a legal claim and potentially a civil suit.

Rickford and Aponte then welcomed Amanda Kirchgessner, state senate candidate for the 58th District, to comment. Kirchgessner is the Democratic challenger for the Nov. 6 election against Republican incumbent Thomas O’Mara.

“I’m here to show my support for human rights locally because we don’t have them,” Kirchgessner said. “People are being displaced … and the real measure of a community is how well the least of us is doing, and I’m here to tell you, they’re not doing very well right now.”