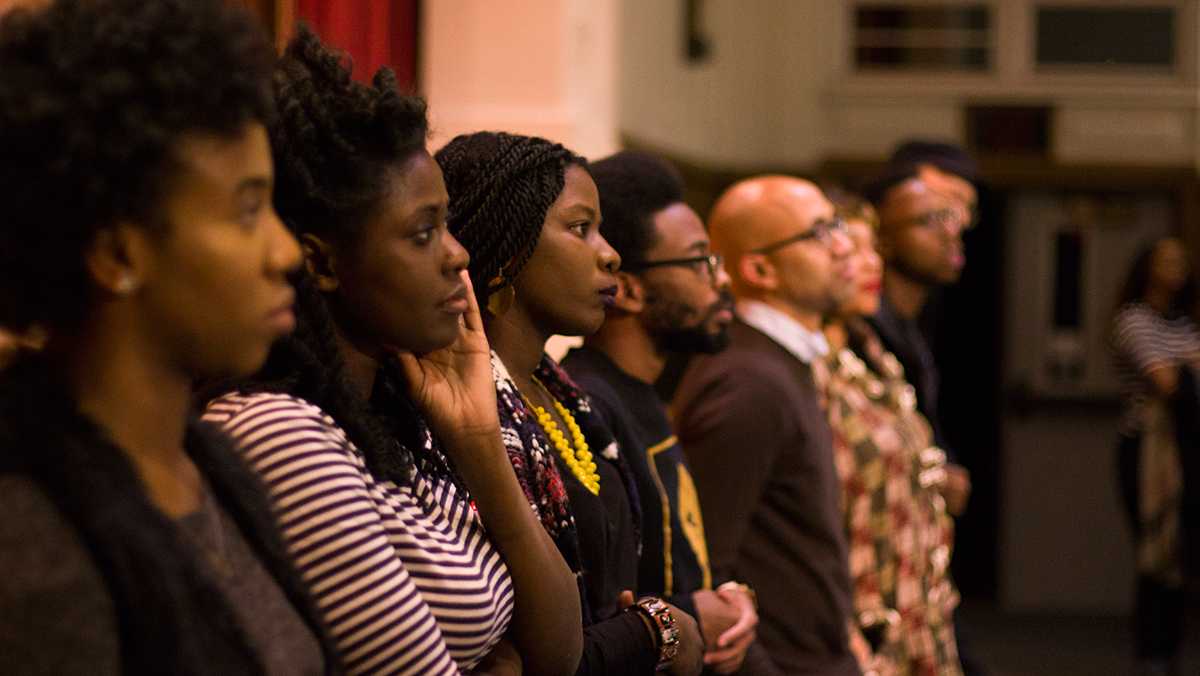 Black Lives Matter: Ithaca describes itself on Facebook as a “grassroots, ideologically diverse organization committed to anti-racism and to the political, economic, social and cultural empowerment of black residents in the Ithaca area.”

One member of the group, Nicole Lafave ’14, said the organization will hold discussions to educate people about racial inequalities occurring in the Ithaca community in areas such as poverty, housing and employment for people of color.

Russell Rickford, assistant professor in the Department of History at Cornell, was among the members of the group giving the presentation, advocating “allyship” for the community and promoting education of all people so that people of color and white people can unify.

“Black political struggle is essential to the struggle to democratize society for all,” Rickford said. “We have come together across political and ideological differences. Unite our community to anti-racism, anti-sexism, anti-imperialism and justice for LGBTQ people of color.”

Rickford said the Ithaca group has no official affiliation with the national Black Lives Matter movement as of yet, and members of the group will be deciding in the near future whether or not they want to formally affiliate. He said the Black Lives Matter movement is decentralized and democratic, and although there is a more formal network, in theory, anyone can use the name.

One of the meeting attendees said white people often struggle to understand racism and find ways they can directly support the Black Lives Matter movement. The audience’s attention was directed to Eden Connelly, who is part of a steering committee responsible for bringing Showing Up for Racial Injustice, a grassroots organization that began in California, to Ithaca. Connelly said SURJ is a space for white people interested in anti-racist work to gather and learn more about whiteness.

“It’s a space for us to begin engaging with certain projects that are going on here locally and nationally, and we do that through really close communication with the leaders of the Black Lives Matter movement,” Connelly said.

Some of the meeting attendees mentioned the recent protests around the racial climate at the college by the group People of Color at Ithaca College, pressuring Ithaca College President Tom Rochon on Jan. 14 to announce his early retirement.

Lafave said she is proud of what POC at IC has been able to do in terms of addressing racial issues on campus. She said both movements — POC at IC and Black Lives Matter: Ithaca — are intended to unify the community, which she felt they have done successfully.

Rickford said he is also impressed with the progress POC at IC has made and thinks Rochon’s retiring early is a positive step for the college’s community.

“There are some very, very powerful activists among the students, the staff and faculty of Ithaca College, and I think that they showed their courage and their determination, and I think that the question now in the future isn’t necessarily what the institution is going to do,” Rickford said. “This is an exciting, grassroots, in some ways multi-generational, multi-racial movement, and the question is ‘How powerful can it become?’”

Zaneta Clarke, who attended the community rally, said she hopes Black Lives Matter: Ithaca continues the dialogue it is creating.

Freshman Casey McCracken, who attended the rally, said she thought the community-based aspect of the organization was important.

“I think it was really cool to hear a lot of community members speak about issues, what issues they see Ithaca having,” McCracken said.

Before the rally, Black Lives Matter co-founders Alicia Garza and Opal Tometi were joined by the international ambassador for the movement, Janaya Kahn, in a panel at Sage Chapel of Cornell University. Sean Eversley Bradwell, assistant professor in the Center for the Study of Culture, Race and Ethnicity at Ithaca College, moderated the panel.

Garza said their movement was prompted by the killing of Michael Brown in Ferguson, Missouri.

“The reason that that galvanized people is because they had to watch a body bleed out for 4 1/2 hours,” Garza said. “His mother stood there and watched her child die. So if you can’t feel that, then what have we become as human beings?”

“Love truly drives it all. Black love can be our ideology. … In many ways, it can be a new framework, a new paradigm,” Garza said. “Every day, in so many areas in life, we’re being told by our society that we’re less than — that we’re disposable, that our lives don’t matter. And so black love has to be the ethos of our movement.”