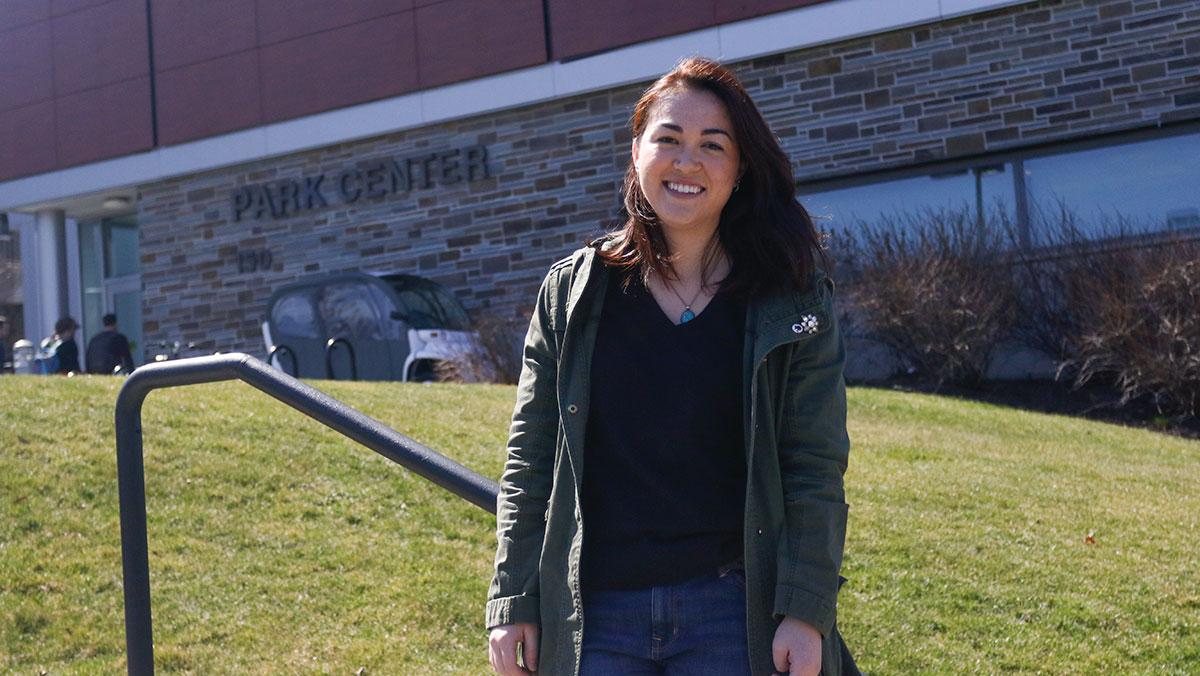 On many school nights, Amanda Lee, a senior with sleek red hair, can be found in Ithaca College’s School of Business poring over her laptop and rapidly typing notes, organizing Excel documents and managing work for numerous clubs.

Lee, a business administration major from Jamesville, New York, is involved in almost every facet of the business school. She participates in the college’s chapter of the American Marketing Association; she is a peer career adviser, a national analytics team competitor, a business tutor, a dean’s host and a member of the senior cabinet’s professional development committee.

Sean Reid, dean of the business school, recently recognized Lee for these accomplishments with the Dean’s Leadership and Distinguished Service Award. She was one of three recipients. Lee said she was presented with the award in her marketing class when she was preparing for a presentation.

“The deans walked in, and I was like, ‘Oh my God, are we going to have to present to the deans?’” Lee said. “It was really nice to be recognized.”

Lee said she has always enjoyed maintaining a busy schedule. In high school, she was part of the National French Honor Society, Key Club, tennis, track and stage crew, among other activities.

Of her college extracurriculars, Lee’s most prominent involvement has been with the AMA, of which she is now co-president. She joined the organization her sophomore year, then became vice president of finance her junior year — though her concentrations are in management and marketing, very different from finance.

“I didn’t really see myself in that position, but I learned so much about finances and the importance of keeping track of stuff,” Lee said. “I think if I didn’t have that background, I wouldn’t have been as successful in the position I have this year.”

Scott Erickson, professor and chair of the Department of Marketing and Law and adviser of the AMA, said Lee really stepped up in taking the role and ended up doing “a great job.”

“She’s a forceful personality,” Erickson said. “She’s not one of those people who takes over a room, but she’s very effective in getting things done kind of quietly — assertive.”

Senior Mallorie Azzolini, a member of AMA and a friend of Lee’s since their freshman orientation, said Lee is a very personable leader and makes an effort to connect with everybody in the organization.

“I feel like she’s made herself approachable,” Azzolini said. “She’s not the kind of co-president that just stands in front of the room and then leaves as soon as she’s done talking. She’s not just a leader figure. She actually engages with everybody in the club.”

In addition to the AMA, Lee has worked as a peer career adviser since her sophomore year. Peer career advisers are volunteers trained to assist students with job searches, resumes and interview preparation.

“People come in sometimes and are really stressed out,” Lee said. “They’re like, ‘I’ve never been here. I don’t know what I’m doing. I don’t even have a resume.’ … And it’s really good just calming them down and saying, ‘We can help you. Don’t worry. We’re going to get this done.’”

The business school is currently developing an analytics program, so Reid asked Lee and three others to prepare for a national competition in the area. The competition involves analyzing over 40,000 rows of data and preparing a presentation.

Senior Lisa Famularo, a friend of Lee’s, described her as outgoing, approachable and detail-oriented. Famularo is also part of the analytics team and said Lee is leading their research, taking initiative in talking to professors for guidance.

“She never misses anything,” Famularo said. “She’s able to pick up on all the details of a situation, whether that be at work or in a more social setting. She also loves to laugh. I feel like she’s always laughing and smiling, which is great both for herself and the people around her. I think her energy really spreads.”

Erickson said many students participate in extracurriculars for the purpose of “filling in slots on the resume,” but that Lee is not one of them.

Lee has a job lined up with Amazon next year, though she is unsure where she will be located. To underclassmen, she said she would encourage them to get as involved as they can.

“I think Ithaca is a great place for getting involved in extracurriculars and conferences and competitions — everything,” Lee said. “I think it expands on what you learned in the classroom. You learn about yourself in the process.”