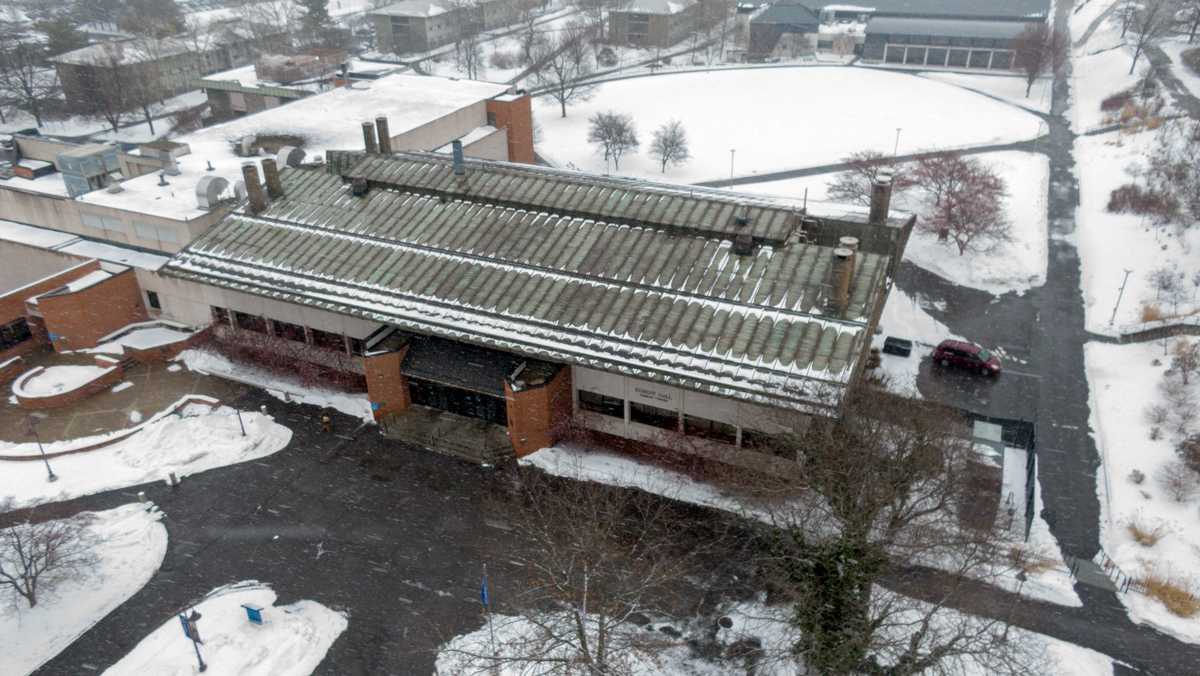 Brandon Galione/The Ithacan
Ithaca College is gathering feedback from the campus community and conducting a design study to revamp the Campus Center to cater more toward the needs of students. Some members of the campus community think that the building lacks productive spaces, is difficult to navigate and does not serve as a sufficient hub for students at the college.
By Maia Noah — Staff Writer
Published: February 14, 2019

Freshman Glenn Hartley wandered around the Campus Center at noon, hoping to find one table to sit at with her friends and grab lunch. However, she was out of luck. IC Square was filled to the brim with students, which left her feeling overwhelmed and led her to look for a new place on campus to spend her free time.

“Especially around the noon hour, although it is a convenient time for everyone to eat, there is not enough space for everyone to do so,” Hartley said. “I think that’s congested and can be improved.”

Although the Campus Center was intended to be a place for all Ithaca College students to gather, many do not feel like there is a central hub on campus. Students are frustrated with the lack of productive gathering spaces in the building and how overcrowded it tends to be. In response, the college is beginning to take steps to transform the Campus Center into a more student-centered space. Through a design study that was created during Fall 2018, the college is working to transition the building into one that broadly supports students from all schools on campus.

Currently, the Campus Center lacks the means to serve a college with an undergraduate population of 6,101 students. Tim Ryan, assistant director for environmental health and safety in the Department of Environmental Health and Safety, said there is no total occupancy for the entire building. In IC Square, which is where many students aggregate, the occupancy is 213 people. Aside from the lack of productive space in the building, it is also difficult to navigate. Lounges and meeting rooms are upstairs, away from the student dining spaces downstairs, and as a result, many students are unaware of what the building has to offer.

Bridget Bower, librarian and college archivist, said that the Campus Center building dates back to the 1960s. When Egbert Hall was constructed in 1961, Bower said, it was built with 2,000 students in mind. Bower also said that in 1986, the college began renovations, adding the Phillips Hall side of Campus Center in 1987. It was not until 2005 that IC Square was renovated.

Based on the desires of students, student unions or campus centers that benefit students generally have dining halls that are open late, study lounges and sufficient space, according to Michelle Janisz, director of Greek affairs at Illinois State University, who also conducted the study, “College Student Unions: A Delphi Study Regarding Purposes, Amenities, Barriers and Future Influences.” The college’s Campus Center lacks these characteristics.

Junior Eliana Berger said she does not think that there is one place on campus where large groups of students can gather with peers and spend time.

“I don’t spend a lot of time in Campus Center,” Berger said. “It’s always loud, there’s always lots of people and no tables and no places to sit — I don’t think Ithaca has a ‘hub’ of campus life.”

Not only does a well-designed campus center allow for more student productivity, it also could prevent a phenomenon known as “silo mentality.” In the past, college community members have expressed that students, faculty and staff often seclude themselves to their respective schools, hampering collaboration and engagement.

Janisz said she found through her study that the presence of a student center can help to bring a sense of community to students. Janisz said student unions also are a leading reason why many students chose to go to a specific college.

“It’s important in college choice, has a symbolic value, serves a variety of communities with various amenities and services, and had a role in the development of students,” Janisz said via email. “Community means a variety of things; it involves not only the physical space or building but is welcoming and a gathering spot for various constituents.”

The college sent a survey to students Jan. 30 to help guide the college toward a successful design plan. The survey asked students if they would want additional study spaces, student service spaces and other amenities in the Campus Center. Some of the spaces being considered include collaboration spaces, a coffee shop, a dedicated student lounge, performance spaces, a makerspace including tools that encourage hands-on activities, like 3D printers and sewing machines, and a large event space. The survey also notes that the building could include student employment services, health services, counseling services, an LGBTQ center or an Information Technology desk.

Rosanna Ferro, vice president for the Division of Student Affairs and Campus Life, said she hopes the survey will generate comprehensive feedback from students regarding what they individually envision for the Campus Center.

“​The overall goal is to ensure that the campus center becomes a space on campus where students can enjoy a meal, study and socialize with friends,” Ferro said via email. “As a residential campus it is essential that our campus center becomes a hub for students, a space that they feel they can enter and feel at home; the goal is to ultimately create an engaging and dynamic space in the heart of the campus.”

The survey process concluded Feb. 10, with a total of 1,030 students completing the online form.

Tim Carey, associate vice president for the Office of Facilities, said his department began to develop a design study in collaboration with QPK Design, an architecture firm. Carey said the cost of the study is not yet known because it has not been completed yet. The college had previously worked with the firm when it expanded the Circle Apartments in 2010.

Carey said the architecture firm is in the data-collecting phase and has been meeting with constituent groups on campus. This is the first phase of the study, and there will be meetings and open-forums held, which will likely occur in March, where members of the campus community can participate and voice their perspectives concerning the building.

While future plans are being pursued, Carey said improving the current role and services of the Campus Center is the main goal this academic year. The aim is for the study to be completed later on in Spring 2019 or at the beginning of the summer. The study is also contemplating the current configuration of the building in relation to space allocations, as well as in relation to the flow of the building.

In addition to being an ineffective student space, Carey said the building is also fairly old. The roofing systems, mechanical systems and the windows are not energy efficient. The facilities, maintenance and structural pieces will also be considered in the redesign.

Carey said the study committee is also analyzing what other universities around the country are doing with their student unions in order to make the college more responsive to the needs of students.

In Spring 2018, the Campus Center office joined the Division of Student Affairs and Campus Life. With this major change, the Campus Center was given additional resources, like financing and staffing, in order to become more student-centered. Jess Shapiro, assistant director of the Campus Center, was also added as a second full-time staff member for the building.

Sybil Conrad, director of the Campus Center, said the college is making the best of the available space to make it more in accordance with the interests of students.

“Being part of Student Affairs, the drivers for our division and divisional goals are all focused on improving the student experience, so we have so much support for shifting things and putting resources into what we think will best serve the students,” Conrad said.

Conrad said ensuring that the design study is elaborate and comprehensive is crucial so that the Campus Center can successfully serve students today and for years to come.

“We want to do the best we can to build exactly what meets the needs not only of the students today, but into the next number of decades of students,” Conrad said.

Aside from the design study that is currently in the works, the college is also taking individual steps to make the Campus Center more of a student-centered environment. The college purchased an arcade console in September for the Recreation Center, which is located near the lobby of the building. This console includes games like Pac-Man, Donkey Kong and Space Invaders and has become one of the most popular items in the Recreation Center. A karaoke machine was also added for karaoke nights on Saturdays for students. The Campus Center staff also extended the hours of the Recreation Center on Fridays and Saturdays to 12 a.m. Free popcorn has also been added at the Information Desk every night after 7 p.m.

Many students hope their perspectives on how the Campus Center can be improved will be heard by the college.

Senior Chelsea Whittemore, Campus Center events services operations manager, said she thinks getting more students involved and getting their perspectives heard in the process of restructuring the Campus Center will be necessary for making the building more beneficial for students.

“I think it would be nice to poll students more and use their suggestions,” Whittemore said. “I just think there are more things that could be improved on.”

Junior Paul Andrews said he thinks the college can do more to make students aware of what spaces and activities the Campus Center currently offers.

“There is more that can be done,” Andrews said. “Like those lounges upstairs, unless there’s event happening, no one ever goes in them, so maybe do more with what we do have.”

Senior Nicholas Duffin, Campus Center event services operations manager, also said that the Campus Center has the potential to be a great space where students from all schools on campus can gather and collaborate. He hopes the design study will help to make this feasible.

“I think a lot of people don’t think Campus Center is somewhere they can call home or find themselves attracted to, so I think there are just certain things we can do better to make this a space that people can use more frequently and commonly,” Duffin said. “It has the potential, but, currently, I don’t think everyone would feel that it is the ‘hub’ of the campus.”