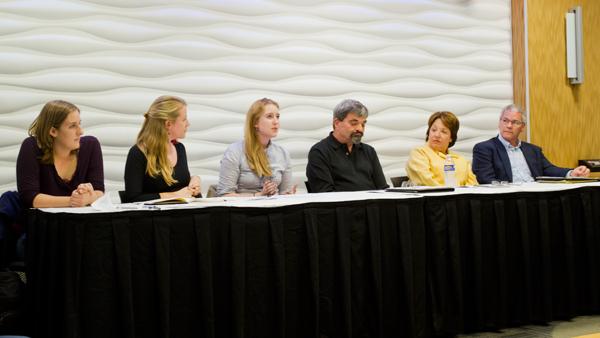 Concerns about access to people and information, indirect censorship and the corporatization of the atmosphere at Ithaca College dominated a tense panel addressing concerns about the college’s new student media policy last week.

More than 50 students and faculty from across Ithaca College packed into Park 220 in the Roy H. Park School of Communications for the Oct. 15 discussion, sponsored by the college’s chapter of the Society of Professional Journalists.

The media policy requires student media to go through the college’s media relations office to speak with any members of the Administrative Assembly — a group of 84 top administrators, including the president, vice presidents, deans and directors —  regarding college policies and developments. The policy took effect Oct. 1.

The panel consisted of David Maley, associate director of media relations; Diane Gayeski, dean of the Park School of Communications; Wenmouth Williams, chair of the journalism department; Kelsey O’Connor, editor in chief of The Ithacan; Emily Miles, editor of Buzzsaw; and Nicole Ogrysko, news director for WICB. President Tom Rochon was invited to the panel but declined because of a prior engagement. Junior Meagan McGinnes, president of SPJ, moderated the panel.

The panelists and the audience discussed recent petitions against the policy, Student Government Association’s call for the policy’s repeal and the sit-in protest that took place Oct. 12.

McGinnes raised the concern that the college was dealing with student media more the way a corporation would than like an academic institution should.

Williams said the college is facing two different paths trying to decide how it is going to act.

“This is not a corporation. If it was a corporation, I think the fiscal stability of our corporation after the enrollment in the fall would call into question the ability of the corporate leaders to put us in a financial situation to make money,” he said. “We’re here to educate students, and, again, I’m sorry that some people have a problem with that.”

“We haven’t actually had many stories concerning college developments yet, so I guess we’ll see as time goes on,” she said. “We can only try it out for now.”

Gayeski — who, with four interview requests from The Ithacan during the first six weeks of the semester, had the most of of any member of the Administrative Council — said those four requests did not distract her from her work.

“I get so many requests for different kinds of information and meetings,” she said. “I personally feel like four requests did not get in my way. If I felt this [policy] would impede my access to The Ithacan, I would feel very uncomfortable.”

However, the policy does not apply to class assignments, Maley said.

“What [Rochon] decided is that it made the most sense to exclude the academic side from this particular policy.” Maley said. “We are going to facilitate the ability of student journalists to contact the people that they would like to speak to about a particular policy or a particular college development.”

Williams said because students don’t have to go through Maley for class work, the journalism department is not directly affected by the policy.

“I don’t see any negative impact on what happens in class and what we do in the journalism department in terms of what we do with our students, because they are excluded from the policy,” he said.

During the question and answer session, some students said they were concerned the college is trying to control student media.

If student journalists were simply reaching out to the wrong people, junior Emma Markham said, there could have been alternative methods instead of enacting a policy that creates tension between the students and administration.

“It’s something that could have been addressed through education and implemented as an academic policy as opposed to this policy,” Markham said. “It could have been handled in a different way, so why wasn’t it adjusted in that way?”

Buzzsaw magazine publishes three issues during the fall, said Miles, so they aren’t working on short-term deadlines like The Ithacan.

“Our concern is not with timeliness, not with convenience, not with the workload of administrators but how student journalists are able to get information on our campus within this campus community,” Miles said.

Kelly Dietz, assistant professor of politics, said the college community is still confused as to why the policy was issued, and they are concerned about the possible effects it will have on what will be covered in the future.

“The policy seems to have been put in place because of a problem that has affected a very small number of people … I’m still confused about the policy,” she said. “How would you ensure that the reader is getting all the different voices that are out there?”

In response, Maley said he does not think the policy will stop student media from covering contentious issues.