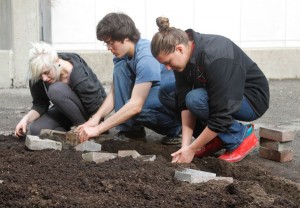 The week began with Hempstravaganza, an Earth Week kickoff celebration with live music and hemp jewelry-making on Monday. On Tuesday, the Biker Bomber Initiative, a group which is planning to build bike shelters across campus, sponsored a bike repair workshop in which students could learn how to maintain their rides and use the organization’s new bike kiosks in front of Egbert Hall. A Frack Off! demonstration will also be held at 12:10 p.m. today in the Academic Quad to protest hydrofracking in the area.

Earth Day, which will be held  Sunday, celebrates the environmental movement and sustainability in the United States.

The garden, which was planned and created by Michael Smith, environmental history professor, and his research team, will feature a host of perennial plants that will regrow from year to year.

“You design it so the plants are all perennials, in that they come back every year,” he said. “They’re mostly edible, fruit-bearing plants that we hope in a few years will create not just a nice place to go sit for a while, but a place you could even have a little snack in.”

Sophomore Allison Currier said ICES had originally established an organic garden next to Williams in the ’90s. However, a lack of participation as the years wore on led to the garden’s decay.

“There was a group of really excited people,” Currier said. “The excited group of people ended up graduating, and I guess it wasn’t continued, which is really sad. It was probably a sign that something new needed to happen.”

Senior Noah Mark said the garden was not kept because there were not enough resources to continue it.

“It didn’t have funding, equipment nor faculty.” Mark said. “There used to be a fence here, and the soil was really poor. Nothing could really grow, so they just let it die.”

ICES will plant an Asian Pear tree and kiwi plants, as well as pollinating plants.

Mark said the variety of plants will ultimately depend on funding and donations.

“Some plants we can get for free through Cornell Cooperative Extension,” he said. “We branched out and did a big fundraising campaign, and we got a lot of donations from nurseries around the country.”

Currier said the research group and ICES are trying to reach out to the other environmental groups on campus through Earth Week.

“We are trying to become an umbrella group on campus for all the environmental initiatives or clubs,” Currier said. “We organized Earth Week, and we co-sponsor most of the events with the other environmental clubs on campus. It’s a way for all environmental groups to come together and do something cool.”

The week is being co-sponsored by Resource and Environmental Management Program, Bomber Bike Initiative and Frack Off!, as well as organizations in the greater Ithaca community such as GreenStar and Sustainable Tompkins.

Senior Margaret Keating, who works with BBI and helped arrange Earth Week, said the group received funding from the school to install the roofed shelters across campus over the summer.

“We’ve been working with the architecture department,” she said, “A class last semester actually built a kiosk for us out of recycled materials.”

Smith said the week’s events will hopefully foster awareness of the environment to the campus.

“Especially with climate change and the strange spring we’ve had, I think an awareness of the human and environment relationship is important enough to have a whole week of activities,” he said.