Students, faculty members and staff at Ithaca College will discover an easier walk to campus next school year. 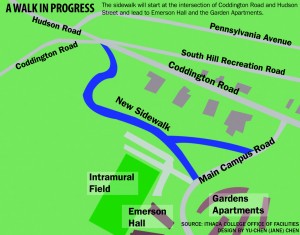 As part of the Athletics and Events Center plan, new pedestrian walkways, lights and bike paths will be installed at the intersection of Coddington Road and Hudson Street. The sidewalks will run behind several houses along Coddington and connect to the entrance of the college near Emerson Hall.

Richard Couture, associate vice president for the Office of Facilities, said he expects the sidewalk installation to begin in mid-May, and the entire A&E Center and sidewalk plan is set for completion by Aug. 4.

“We’ve always wanted to see if there’s a way to provide a reasonable path for our students and other members of the campus community to be able to get from the campus proper to the network of city sidewalks,” he said.

Couture said the lack of sidewalks along Coddington Road has always been a safety concern for the college.

“Our hope is, instead of students walking along the street, they’ll take this path and head up toward basically Emerson Hall,” Couture said.

In addition to the sidewalks near Coddington Road, the college wants to install sidewalks along 96B leading to the front entrance of campus.

Anthony Hopson, assistant vice president for community and government relations, said the Student Government Association, administrative staff at the college, as well as members from the county, city and state, brought a proposal to the New York State Department of Transportation addressing the lack of pedestrian walkways along 96B at the beginning of last semester.

In 2008, a car driving on 96B hit an Ithaca College student walking along the side of the street. A car then hit Master Patrol Officer Bruce Holmstock who was treating the student. Hopson said the accidents on 96B partly prompted the college to investigate safer walkways.

“We’re conscious of the fact that we don’t want to see another accident occur, and that includes the state, the county and the town,” he said. “So ultimately, we’re looking for some kind of enhancements on that street.”

Hopson said the state is reviewing the proposal and suggested in December that it start addressing concerns by installing signs along the highway indicating that drivers should watch for pedestrians. Hopson said the process is lengthy because of the state’s unstable
financial situation.

“We need to keep the pressure on and remind them that this is a problem,” he said.

Couture said the college thought of student safety as its main concern when planning for new sidewalks and will also install blue-light phones along the pathway.

“It’s obvious to anybody who lives or works around here, that tons of students walk up this section of Coddington Road to get to all these apartment complexes,” he said. “We wanted to try to do something to help promote safety.”

Jonathan Ablard, associate professor of history, said he walks or bikes to campus two or three times a week. He said the new sidewalks would make his commute faster and safer, especially if he walks home at night.

“As it stands, there’s no safe way to walk from off campus to where the city sidewalks begin,” he said.

Sgrecci said the sidewalks’ installation is part of a larger master plan to keep academic buildings and residence halls within the core oval of the college’s layout and push parking lots to the perimeter.

He said the college tries to maintain a “10-minute oval,” or a central circle of academic buildings that students can safely reach during the time between classes. Now, he said the college hopes to strengthen its pathways for pedestrians.

Ablard said it worries him when he sees students walking to and from campus in the middle of the street.

“I’ve always been concerned about seeing students walking up and down 96B at night,” he said.

Though Ablard said the new sidewalk plan is a step in the right direction, he hopes the town will construct clear pedestrian walkways to connect the edge of campus to where city sidewalks begin.

“The town has been very bad about doing these kind of pedestrian infrastructures on this side of the town,” he said.