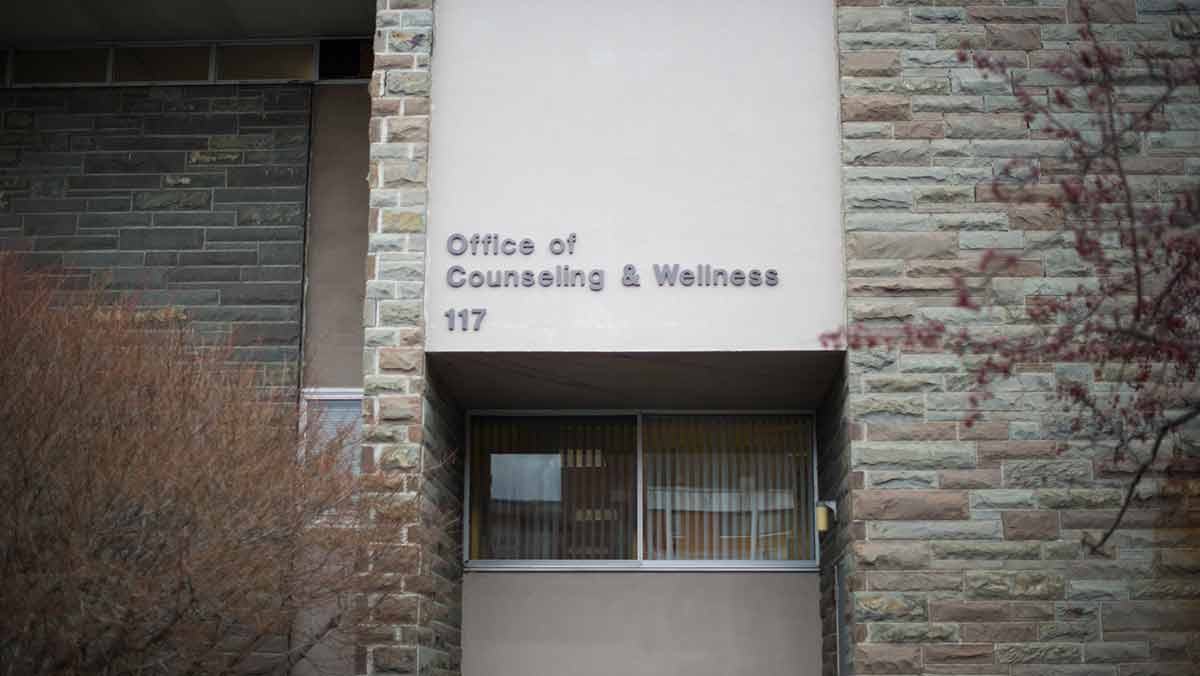 Tommy Battistelli/The Ithacan
Wait times at the Ithaca College Center for Counseling and Psychological Services have decreased slightly so far this year, despite a couple of staffing setbacks.
By Elena Piech — Contributing Writer
Published: October 7, 2015

Wait times at the Ithaca College Center for Counseling and Psychological Services have decreased slightly so far this year, despite a couple of staffing setbacks.

Last semester, the Faculty Council, Student Government Association and members of the #getCAPSready campaign petitioned the college for more funding for CAPS, and The Ithacan reported wait times were two to three weeks. Last year CAPS had eight counselors, and with the counselor currently absent for personal health reasons, there are now only seven.

This year, people who call the office get set up with the first available phone call appointment, which Harper said happens in a week or less. During the phone call, they have their concerns assessed by a counselor, and can be given an appointment time. Harper said they take a few days to a week or more, but it is possible to get someone into a face-to-face appointment unscheduled if it is urgent. There are also same-day crisis hours every Monday through Friday 2:30 p.m. to 4:30 p.m.

Harper said the wait times for a phone call appointment, which determines the severity of the situation before scheduling an in-person appointment, is under a week.

Last year, people seeking help would get screened in the CAPS office and then get scheduled for an appointment, which would take several weeks, as The Ithacan reported at the time.

“[The telephone-based assessment] seemed like a good idea,” Harper said. “It’s a new system. It speeds up the process for students.”

Harper said wait times are slightly down from last year but are longer than she had hoped for this year due to the staffing issues.

Harper said CAPS is finalizing the hiring of the post-doctorate resident with an anticipated start date of Oct. 14, and the counselor who left for personal health will be returning after fall break.

CAPS posted the job opening Aug. 12. Harper said she thought CAPS could try to fill the position within one month, but expected that the process could take longer than anticipated.

“I would be shocked if we had an ad out before the middle of September,” she said. “Our target was to get this thing out very fast, and the reality is nothing moves very quickly.”

With a late notification for the position approval, Harper did not want to rush the hiring process, as the college needed to advertise the position and conduct background checks and interviews. After reviewing applications, she said CAPS may have found an individual to hire.

Harper said another counselor is currently on maternity leave, but her position has been filled.

Even with less staff, Harper said CAPS has scheduled 1,200 appointments this semester, though she said the demand is average.

Freshman Jack* said he was disappointed in the phone-based assessment.

“I went to them, and the next time they could schedule me for was like a week in advance, and it wasn’t an actual appointment, it was just a calling appointment,” he said. “I didn’t do it. I just felt like it was weird at that point.”

Jack went to CAPS in early September. After waiting in the office, he said he was then given a business card with a scheduled time to have a phone call with a counselor. That scheduled phone time was one week after he first entered CAPS. If he carried through with the phone call and talked to a counselor, he would then have an additional wait time as the counselor decided the severity of his issue and set a date to meet face-to-face. Jack said he felt the process took too much time, and said he thought CAPS was advertised as a place students could walk into and speak to someone immediately.

“I thought it would be more open because I feel like that stuff is delicate,” Jack said. “It was weird after that. I guess that’s probably why I didn’t go back. I didn’t know what I was going to get out of it.”

Harper estimated over 90 percent of students call in to complete their phone counseling at their scheduled time.

Junior Eli Serota, one of the founding members of the #getCAPSready campaign, said a friend of his who went to CAPS this year said it was a much smoother experience.

“I know people who have sought CAPS services this semester and were able to set up an appointment within two weeks,” he said. “Obviously two weeks is not ideal, but the progress made has been amazing, and we look forward to watching the progress and we hope it continues.”

Junior A.C. Tierney, a member of Active Minds, said she had not heard much about CAPS wait times this semester since many of her friends are upperclassmen who seek help off campus instead of going to CAPS because they have heard about or experienced the lack of counselors at CAPS in the past.

“I think CAPS does the best it can given the resources and money they are provided,” she said.  “However, I do feel that they are severely understaffed and cannot provide long-term services for students on our campus.”

Harper said once CAPS is fully staffed, it will have a better time with meeting students’ needs. For now, she said CAPS has functioned well even with the setbacks in employment.

“When you ask a staff member how they’re feeling, they’re like, ‘Oh my word, we’re doing a lot of heavy lifting here,’” she said. “Staff have been really feeling the pressure. I think, were we fully staffed it could have gone a lot better, but it’s going pretty good.”