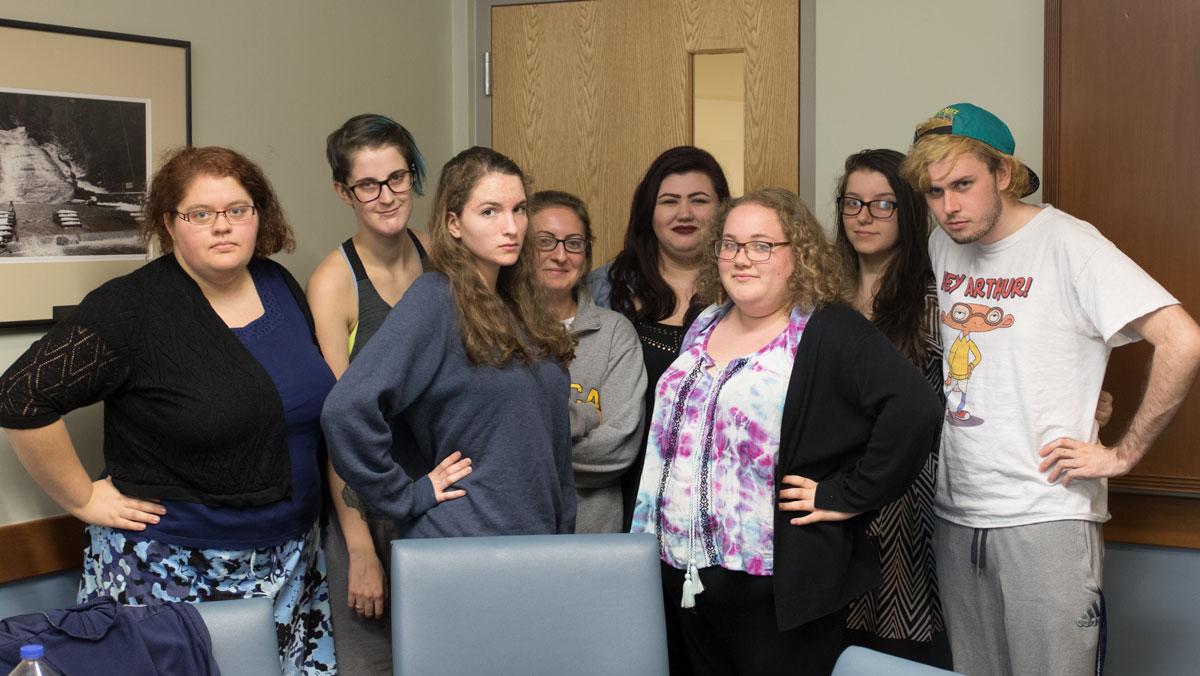 Alexis Liberatore/The Ithacan
IC Active Minds, pictured above, is a club dedicated to raising awareness to mental illness on Ithaca College's campus. Molly Robbins, third from right, is co-president of the club and has criticized the college for not providing enough counselors for its students.
By Ana Borruto — Staff Writer
Published: November 14, 2016

Despite an added counselor and phone screening system, an increased number of students at Ithaca College are using the Center for Counseling and Psychological Services this semester, causing wait times to grow.

Deborah Harper, director of CAPS, said there has been a 15 percent increase in demand for counseling services this semester compared to last fall, as of Nov. 5. Since the start of the semester, CAPS counselors have seen over 660 students, which is 90 more students than last fall. Overall, counselors see approximately 17–18 percent of the student population.

It’s been almost two years since Harper expressed concerns about the inadequacy of counseling services. In Spring 2015, students created an online movement called “Get CAPS Ready” to advocate for more funds and staff for CAPS after students had expressed frustration with long wait times. Since then, CAPS has been able to add a new counselor position to alleviate these problems, but they remain. Last fall, the average wait time for students to see a counselor was seven to eight days. In a year, the average wait time has increased to 14 days.

“We get a position basically to cover a deficit,” Harper said. “We rarely get positions that throw us ahead of demand.”

The college is not the only institution facing these problems. The Chronicle of Higher Education reported that longer wait times are afflicting many other colleges across the country due to a major increase in students’ utilizing mental health services on campuses. Over the past six years, the number of students seeking counseling services has grown 30 percent, according to the Center for Collegiate Mental Health.

The ratio of counselors to students at the college is 1–822, Harper said. According to the International Association of Counseling Services Inc., which accredits CAPS as a counseling service, the recommended staff–to–student ratio is one counselor to 1,000–1,500 students. The college meets this recommendation with its 10 counselors.

Harper said CAPS offers a few services that are meant to relieve some of the pressures of the waitlist, which as of the week of Nov. 1, has around 60 students listed. There is a phone triage service where students can speak to a counselor for a certain amount of time and express their needs. There are group therapy sessions and, for students who need immediate attention, clinical–crisis hours.

Suki Montgomery Hall, assistant director of CAPS, said group therapy is the most–preferred option for students because they can see a counselor more often, whereas with one-on-one sessions, students see a counselor every two or three weeks.

However, students like junior Molly Robbins, co-president of the college’s Active Minds branch, said these services are still not enough.

“Students, in general, don’t seek as much help as they should, and having one CAPS counselor for about 700–800 students is not optimal,” Robbins said. “Regardless if that’s filling a legal requirement, it’s not necessarily fulfilling the need of the students.”

Robbins said she thinks students do not seek as much help as they should and that the lack of staff and inadequate counseling services contribute to this. According to Active Minds, one in four adults, about 26 percent, are diagnosed with a mental illness. The 18–24 age group, which largely encompasses the ages of college students, is the demographic that shows the lowest rate of help-seeking, according to Active Minds.

Sophomore Alaina Richey said that when she first arrived at the college, she wanted to take advantage of CAPS’ services because she has had a history of mental–health concerns. However, she shares concerns that those seeking long–term service only receive short–term service.

“It made no sense to me to just do some short–term stuff with someone new, and by the time I get comfortable with them, then it’s like, ‘Oh sorry, we can’t afford to give you services anymore,’” Richey said.

About 10 to 12 percent of students seeking help are referred off campus, Harper said. But she said this can be difficult because there are more people looking for help than services.

“Between Cornell and Ithaca College and TC3 students who live in the area, and just community members, all of the services are fairly estranged,” Harper said.

Junior Nick O’Brien said that when he was a freshman, he met with multiple counselors and never formed a relationship with just one due to limited meeting times. He also said his sessions were often canceled by CAPS because it became too busy with other student appointments.

O’Brien said he never received information from CAPS about outside services he should go to or about group therapy sessions he could attend. He said this happened because CAPS is constantly overwhelmed by student demand.

“It is through no fault of the people working in CAPS — they are drastically understaffed and do not have the resources to handle the student body,” he said.

Harper said she has seen students give up on seeking help from CAPS because they hear there is a waitlist and believe they will never be seen.

“There’s just no relief,” Harper said. “I’m afraid students are kind of missing on an opportunity to get some relief when they hear that we’re full.”

She said the administration can address the issues CAPS is facing by providing more staff, adequate resources and a long–term care plan so students can see a counselor for more sessions. Rory Rothman, associate provost for student life, said in an email that he agrees with Harper and did not comment as to whether or not the administration is doing something to fix the problem.