Car Club hits the road for the academic year 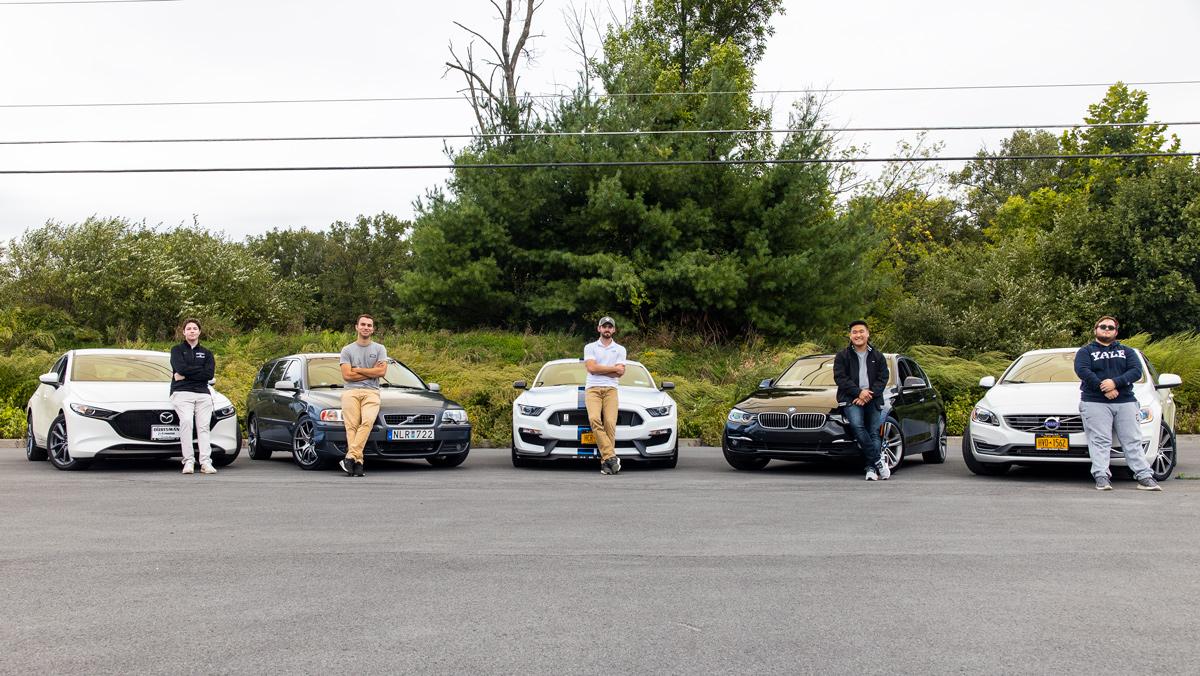 Ithaca College admissions counselor Vashane Rhooms ’18 never expected that a flier on the windshield of his vehicle — a modified 2018 Subaru WRX — would lead to him becoming the adviser of a student organization. He simply took the Car Club flier and tossed it on his passenger seat.

When he took a closer look later, he saw a note scribbled on the back.

“When I got home and I was taking it out, I looked at the back, and it was like, ‘Hey, we need an adviser. Let me know if you’re interested,’” Rhooms said. “So, I gave it some thought that night, and then I shot him an email that said, ‘Hey, I’d love to chat. Let’s meet in my office.’”

Junior Aaron Segal is the president of Car Club and a self-described car enthusiast — what he said people refer to as a “gearhead.” Segal said he can tell if a car has been specially modified from its original form for style purposes. After driving around one of the staff and faculty parking lots, he said he could tell by Rhooms’ vehicle that Rhooms was interested in cars, which led Segal to ask him to be the adviser.

Segal said he cannot remember a time when he was not interested in cars — a passion he picked up from his older brother.

“My brother was really into it, and he sort of took me along for the ride. … A figure of speech, you know?” he said.

Segal said the organization was official when he joined as a freshman, but a graduating senior forgot to renew it, unintentionally putting the brakes on the organization’s status. Car Club is in the process of getting its official status as a club reinstated now that the club has an adviser — one of the requirements to be an official organization.

Despite its unofficial status during the 2017–18 academic year, Segal said the club served as a place for people to connect over cars. Segal said the club, which had approximately 20 active members as of last year, hosted a number of events for automobile aficionados, including group car washes, backroad drives and coffee meetups. Segal said it is not necessary for club members to have cars to join the club.

Segal said the club also has a group chat dedicated to helping one another work on their cars. He said that on multiple occasions, he has helped jump friends’ and other club members’ cars or helped them change a flat tire free of charge.

Segal also said one of his dreams for the club is to have a driver safety course. He said the course would teach important skills like how to drive in the snow and other inclement weather conditions.

Senior Joey LoPiccolo is the treasurer of the club and puts out the club’s weekly newsletter, “The Hub Cap,” which he said he uses to aggregate car content from across the web.

“It’s essentially just my spin on relevant car news,” LoPiccolo said. “Sometimes, I’ll just go on rants. My dream builds, my dream acquisitions [are] in there. Sometimes, there’s articles educating on mechanical know-how and how certain aspects of a car works, driving dynamics.”

Senior Chrissy Faram said she has been a part of the club since her freshman year. She said she likes how the club accommodates all levels of knowledge and interest in cars.

“A lot of what we do is teaching others about cars,” Faram said. “I know that when I went in, I had a little bit of history, but I didn’t know much, and I was welcomed with open arms. They were like, ‘Hey, if you want to learn, we’ll help you learn.’”

Faram also said she is one of the only active women members in the club. In 2018, 19.4% of employees working at car dealerships were women, according to the Bureau of Labor Statistics. Faram said she finds the club welcoming to women members and was excited to see women sign up at the student organization fair Sept. 4.

“I’m so happy and proud to be a girl in the Car Club,” Faram said. “It’s breaking down what people think of when they think of stereotypes. Part of the reason I am so involved is because I want to break that down. I want to get more girls involved.”

Rhooms said he believes Car Club is an example of how anyone with a unique interest can find their niche at the college.

“I’m an admission counselor here, and I give presentations to prospective students,” Rhooms said. “So, when I talk about our student organizations, I tell them, ‘Hey, if you come here, and there’s something you want that’s not here, you can always start it.’ And I share the story of how I’m now the adviser for the Car Club.”