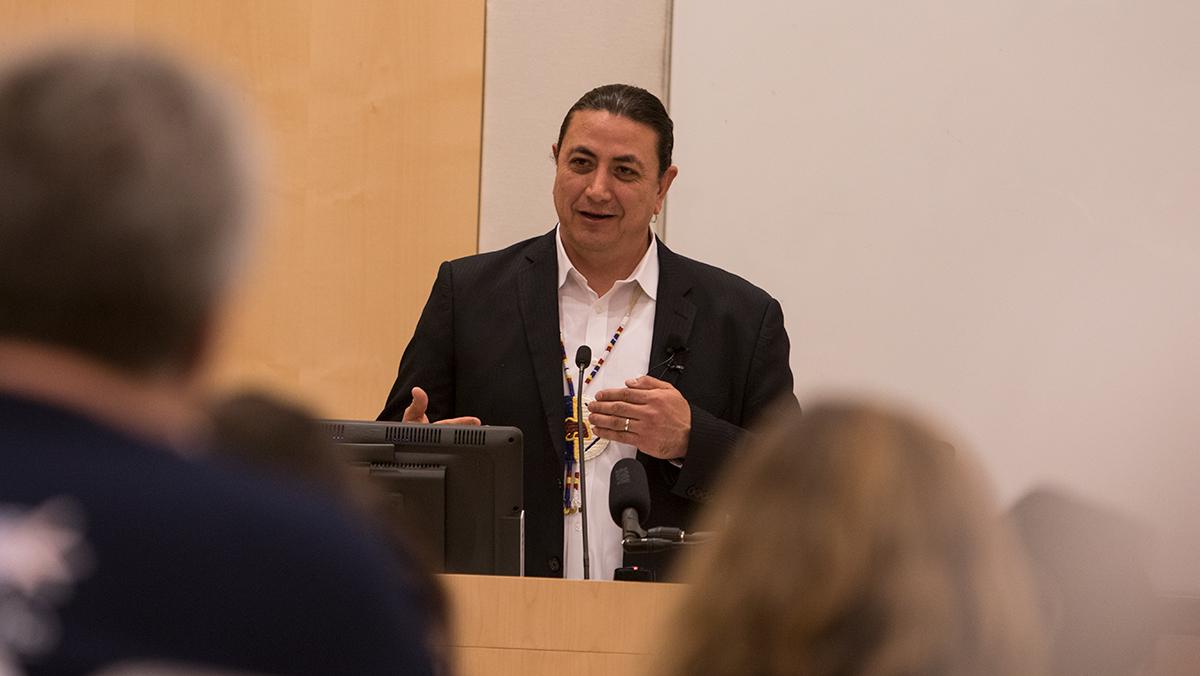 Lilac O'Brien/The Ithacan
David Archambault, chairman of the Standing Rock Sioux Nation, spoke on Feb. 16 at Cornell University about the past struggles of the Sioux Nation including with the Dakota Access Pipeline, and the necessity of hope for the future.
By Nicole Pimental — Staff Writer
Published: February 20, 2017

David Archambault, chairman of the Standing Rock Sioux Nation, spoke Feb. 16 at Cornell University about the past struggles of the Sioux Nation and the need to instill hope for the future.

The Standing Rock Sioux Nation is a Native American tribe located in North and South Dakota that has been advocating against the construction of the Dakota Access Pipeline since 2014. The pipeline is planned to run from North Dakota to Illinois and would be built next to the Sioux Nation’s tribal lands. It would also run through the Missouri River, a source of water for many communities in the area.

The voice of Archambault echoed throughout Stocking Hall as over 530 members of the Ithaca community huddled across four rooms and the surrounding hallways. The event began at 3:30 p.m., and by that time, dozens were stuck peeking in door windows or crowded around laptops to watch the livestream video.

Archambault began by briefly describing the the Sioux Nation’s history and hardships. From the 1830s to 2017, the Sioux Nation lost over 57 million acres of land and saw sacred sites destroyed, children taken away to boarding schools and leaders killed for resisting the federal government, Archambault said.

“This is just the beginning of a lot of wrongs that were committed,” Archambault said. “In every decade, there was something happening with Standing Rock and Indian country.”

In 2010, the Keystone Oil Pipeline was commissioned to run from Western Canada through the United States, reaching as far as Texas and Illinois. This plan would mean the pipeline would run through treaty lands, Archambault said. He also said the Sioux Nation took a stand to oppose this pipeline and passed resolutions against it.

He said the Corps of Engineers could not answer the question and that members of the Sioux Nation decided that they needed to file for an Environmental Impact Statement.

On Dec. 4, the Obama administration confirmed the need for an EIS and stopped construction of the Dakota Access Pipeline. The Sioux Nation’s EIS became null and void when President Donald Trump released a memorandum Jan. 24 allowing the construction of the pipeline to proceed.

In a livestream video of Trump signing the executive orders to advance approval of both the Dakota Access Pipeline and the Keystone Pipeline, he said these actions would provide many construction jobs.

Archambault said he has been trying to contact Trump, or anyone else in the White House, to try to stop the advancement of the pipeline. All efforts have been unsuccessful, but on Feb. 14, the Sioux Nation filed a motion for summary judgment — a request for the court to rule that the other party has no case — arguing there was no change in circumstances to warrant a new decision on the DAPL.

Archambault said the movement that has been created because of this pipeline controversy is something special.

“There’s momentum, and we can keep it there regardless of what happens,” Archambault said. “The only way we’re going to make a change is if we get the United States to change, because it’s powerful when we unite.”

The last 20 minutes of the event were open to questions, and about five were asked. One person asked what people at home could do to support the movement, and Archambault said people can follow their hearts and stand up in their towns on March 10 when the resistance will march in Washington, D.C.

Lee McCaslin, a member of the Ottawa Tribe in Michigan who went to Standing Rock to support the movement, said he was very appreciative of the chairman for coming out to speak.

“I think his presentation was really excellent,” McCaslin said. “I think it’s great that they were going to not only here, but other universities. This brings unity to the whole country.”

Nathan Lazickas, senior history major at the college, said he has been following the movement and the water issue for quite some time.

“My initial reaction is about his comment on Donald Trump, which was really interesting,” Lazickas said. “He talked about how our president is all about greed and money. I think that’s a big issue — that ideology is just filthy and greedy.”

Senior environmental studies major Tristan Koch said what he liked the most was the historical context Archambault highlighted, including the economic and environmental exploitation of the Sioux Nation.

“One of the most striking things he said is, ‘Gold is more valuable than life to the American government,’” Koch said. “He believes life is an experience that needs to be respected and lived.”