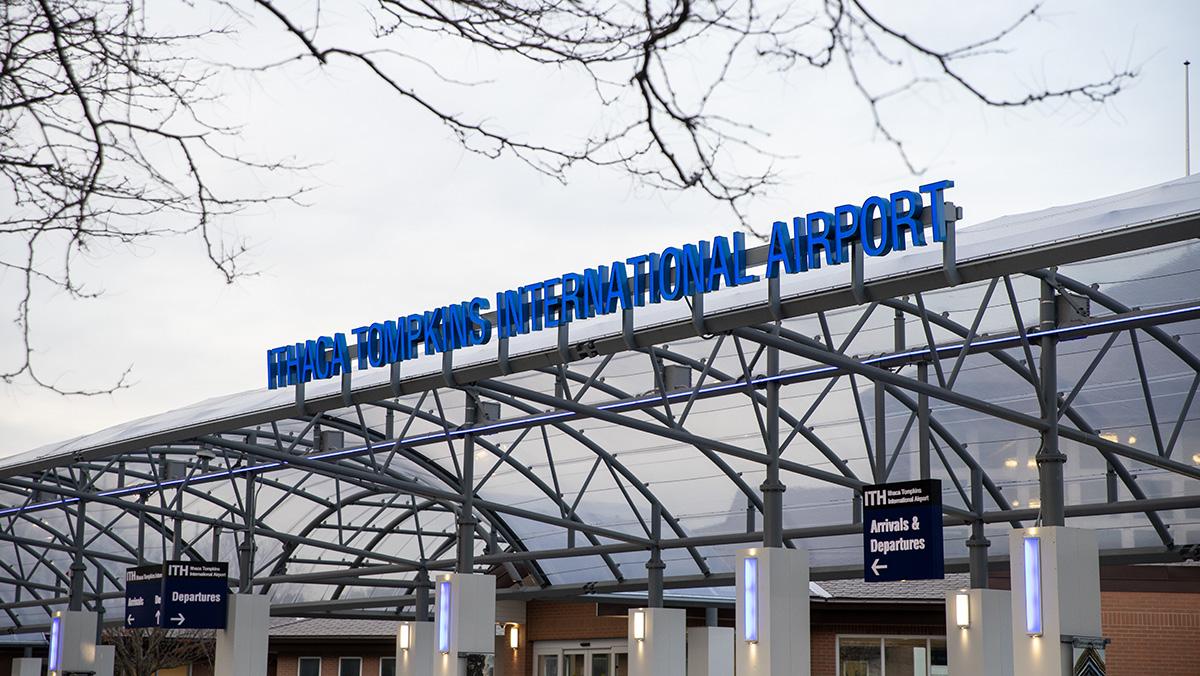 Brendan Iannucci/The Ithacan
The Delta flights to JFK will start Jan. 9, 2023, although it has yet to be announced when Ithaca Tompkins International Airport will discontinue its Detroit options. ITH currently only offers flights from Delta and United Airlines after it was announced in June that American Airlines would be ending its ITH services.
By Syd Pierre — News Editor
Published: November 16, 2022

The Delta flights to JFK will start Jan. 9, 2023, although it has yet to be announced when ITH will discontinue its Detroit options. ITH currently only offers flights from Delta and United Airlines after it was announced in June that American Airlines would be ending its ITH services. Delta offers one early evening flight to Detroit and United has two flights to Newark, New Jersey.

Laurie Koehler, vice president for Marketing and Enrollment Strategy at Ithaca College and a member of the ITH Air Service Board, said that because Delta only offers an early evening flight to Detroit, there are limited opportunities for travelers to make their west bound connections.

“Our ITH staff had been advocating for some time that Delta add an earlier flight to Detroit, but for many practical reasons, that didn’t work for Delta,” Koehler said via email. “The switch to JFK, with two short flights a day including an early morning flight, provides great connections (western and international) and will actually allow for more western connections than Detroit.”

Koehler said the college was excited by the flight offerings to JFK because of how it will make travel for some members of the campus community more convenient, both in terms of time and finances.

Amy Beem, who’s daughter is a first-year student at the college, said she was disappointed to hear that the airport would be discontinuing the flights to Detroit, especially because she is from Ann Arbor, Michigan, which is less than an hour away from the airport.

She also said she thought the flights offered from ITH to Detroit are profitable. Beem said she is a former airline employee and her husband works for Delta, so her daughter can fly standby and she has found that flights from Ithaca are in high demand and are almost always full or oversold.

“But what I guess I don’t understand is, in Ithaca, there’s so much need with the two colleges,” Beem said. “And, not only the students, but the professors, people doing research for Cornell, it’s so transient that I would think the airlines could have an opportunity to make quite a bit of money if they offered more flights, instead of taking away flights.”

Senior Max Tanzer, who lives in Seattle, said he has frequently taken layovers in Detroit on his way back home or to Ithaca and thought it would be nice if there was a direct flight to Seattle.

“Because when I was going through Detroit and stuff like that, there are times where I wanted to make last minute trips back home to Seattle,” Tanzer said. “One of them worked out one time, but one of them didn’t, because the layovers didn’t match up, and the prices were just outrageous. So it’s tough, but in a way I feel like I signed up for it coming across the country.”

Tanzer said once ITH discontinues its flights to Detroit, he could fly from JFK straight to Seattle, but said it would be hard because he has gotten into a routine of flying to Detroit.

Senior James Dimeo lives in Los Angeles and said he thought the flights offered by ITH are very limited. He said he flew into Syracuse this fall because he could not find a flight that worked for him out of LA and had to coordinate with a friend to drive him down to Ithaca.

Dimeo said he thought the biggest challenge of flying from out-of-state into ITH is the cost.

“It is really, really expensive to fly in and out of Tompkins county,” Dimeo said. “[That is] another reason why I chose to fly into Syracuse, but for this upcoming winter, I just booked my flight actually a couple of weeks ago to head back home. It was pretty expensive. I’m not gonna lie. It was a little bit on the more expensive side and it’s not even a round trip. It’s just one way from [the Los Angeles International Airport].”

Koehler said the more the Ithaca community is able to take advantage of the flights offered directly from ITH, the more appealing the airport becomes to airlines, which will then encourage them to add more services.

“The airlines are having to make tough decisions these days given pilot shortages and decreased travel volume,” Koehler said. “From all I have come to understand, the airlines find ITH to be a strong partner, which is great for our community.”

New bike-share program to be implemented in Ithaca