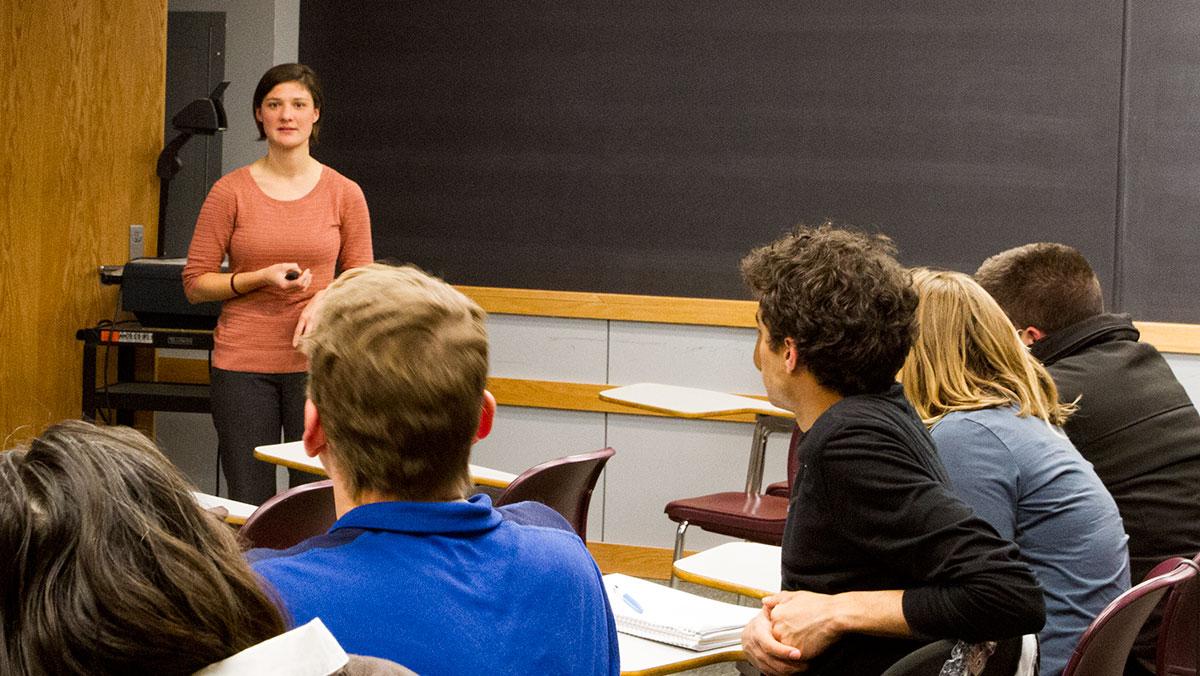 Chemistry alumna Kristina Hugar ’06 returned to Ithaca College to present her research, titled “Design of Base-Stable Organic Cations for Use in Anion Exchange Membranes in Alkaline Fuel Cells” on Nov. 18 in the Center for Natural Sciences.

Hugar is currently a graduate student at Cornell University studying chemistry and researching alternative energies. She has previously worked at Wolfe Laboratories, a contract research organization in Massachusetts specializing in pharmaceutical products. She said one of the main focuses of her research is fuel cells, which are devices that create chemical reactions to generate electricity.

Staff Writer Joe Byeon spoke with Hugar about her research, the importance of alternative energy and what students can do to be more conscious of the environment.

Joe Byeon: Were you interested in science when you were young?

JB: After studying at the college, you worked at Wolfe Laboratories in Massachusetts for a few years. What kind of work did you do there?

KH: They’re a contract pharmaceutical company and, basically, they take on projects from companies and do drug formulation. For example, if you look at a bottle of cough syrup, it’ll have a list of active and inactive ingredients. The inactive ingredients are there for a reason, and they help the formulation whether it be delivering it safely into your body or keeping the active part of the drug stable. So, our laboratories worked on making these recipes for drugs, making it work safely and effectively.

JB: What kind of research are you doing as a graduate student in chemistry at Cornell University?

KH: I’m currently working on making polymer materials that are designed to go into fuel cells, which are electrochemical devices that are capable of producing energy in a more clean and efficient way than conventional sources, like the internal combustion engine. Polymers are basically really long macromolecules composed of tiny units that are strung together. These long chains can have unique properties so you can build materials out of them like cups, fibers and nylon.

JB: How did you get into researching fuel cells?

KH: It started out when I began to be interested in polymer materials and how designing good polymer material can have a positive impact to the health and the environment. I really became interested in fuel cells when I got to graduate school. My advisor, Geoff Coates, is a well-known researcher in polymer chemistry. He had a project that needed a researcher, and I was available and interested, so it kind of fell together like that.

JB: Is there anything being done in Ithaca to bring fuel cell technology?

KH: There’s a big initiative to bring a fleet of hydrogen fuel-celled buses to Ithaca, and it’s great because when you use hydrogen as a fuel, the only by-product is water. But there’s a couple things that have to be in place in order for this to happen.

JB: What are your thoughts on fossil fuels, and how urgent is the need for alternative energy?

KH: It’s a very complicated and important theme in science research right now. As far as fossil fuels, I think that there are many different ways you can talk about why it’s a good idea to think about an alternative — for example, in terms of an emissions standpoint or fossil fuels being a limited resource because it will eventually run out. What I would say is that I think right now we can operate in a world where we don’t need these alternative energies. They’re not necessary maybe right now, but they will be necessary and increasingly needed in the future, whether it’d be 50 years from now or a hundred. The point is, we are going to need these things eventually, and basic science research to understand and improve these technologies takes a very long time. It’s going to take a long time for these thing to be where they need to be so they can be really effective and economically viable, so the basic research needs to start now so that we’ll be ready for it when we need it.

JB: What can college students do to care more for the environment?

KH: I would say that just be mindful of the choices you make in everyday life. Aside from being a scientist, I’m a consumer, and when I buy new things I think about if I really need them or if I’m going to really use them. Or, it can be as simple as just eating all the fruits and vegetables in your fridge and not letting them go to waste. Also, I feel like something that would help everybody is having conversations. Don’t be afraid to learn about something that you might think is over your head or something that’s new you’ve never heard about. Be interested as a citizen of a planet and be interested in technology and science that can have a difference in people’s lives.