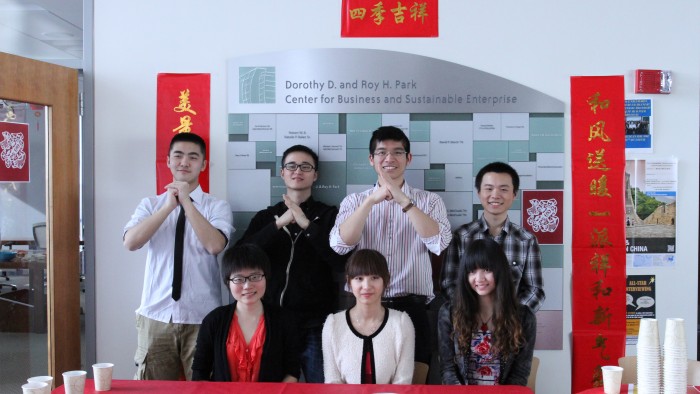 Emily Fedor/The Ithacan
Members of the Chinese Students Association e-board hosted a day of festivities in celebration of the Chinese New Year Sunday afternoon in the School of Business.
By Michael Tkaczevski — Staff Writer
Published: February 13, 2013

Dumplings, fried rice and a cornucopia of sauces and meats lined tables on the second floor of the School of Business as a new student group, the Chinese Students and Scholars Association, celebrated the Chinese Lunar New Year on Sunday.

The celebration of the Year of the Snake was organized by the CSSA, which aims to encourage communication between Chinese and American students to generate interest in Chinese culture on campus. Chinese and non-Chinese students attended, as well as faculty and several local Chinese families.

The CSSA was established this semester by the efforts of different members of the Ithaca College community and was spearheaded by its president, junior Kelly Zhang.

“We just wanted to recreate what we do in China,” Zhang said.

Students at the event played Chinese and English Taboo and sang karaoke. There was also a performance by junior Nils Schwerzmann, who played the Erhu, a traditional Chinese string instrument.

Students received support from faculty, including adviser Hongwei Guan, associate professor of health promotion and physical education. Zhang said she never expected to be spearheading a new student association, but she was inspired by the success of last semester’s Mid-Autumn Festival, which was organized by the college’s Asian American Alliance.

Senior Heather Huang said she was glad to be able to celebrate the new year with fellow students, Chinese and non-Chinese.

“Chinese New Year is all about tradition and about gathering together, feasting together,” Huang said. “It’s a very creative cultural aspect, because every year is a different animal of the zodiac. It’s basically like a family reunion.”

To get the word out, members of the CSSA invited about 20 people through Facebook and personal contacts. By the time the event was about to begin, 50 people had RSVP’d on the event page on Facebook.

“At first we only invited Chinese people, but then we realized … that’s not what our organization is about,” Zhang said.” We want to make everyone join us and make everyone experience our culture.”

The event was organized quickly. The CSSA had about a week to advertise and received the funds for the food just three days before the event itself. Zhang said 70 people attended the event, based on their sign-in sheet.

Even with the time constraints, Guan said he was happy with the turnout.

“Considering the short time and busy schedule and the new founding of this organization, this is a great success,” Guan said. “I’m really proud to support the students. They worked really hard and even threw in yesterday to make this happen.”

Guan said the CSSA is interested in promoting cultural awareness to support the recent interest in China, including the IC 20/20 center in China and the recruitment of Chinese students.

“One of the goals is that we help Chinese students to adapt to life and study here on campus,” Guan said. “On the other hand, we want to facilitate the Americans to go to China as well from this campus.”

Among the interested non-Chinese attendees was junior Automm Lombardo. She and her sister came because Lombardo is friends with Zhang, she said, and she wanted to learn more about Chinese culture.

“I have a lot of Chinese and Asian-American friends here at the college, and I don’t know a lot about the culture, so I thought this would be a good way to see what it’s all about,” Lombardo said. “I like events like this because taking a class is a lot of commitment.”