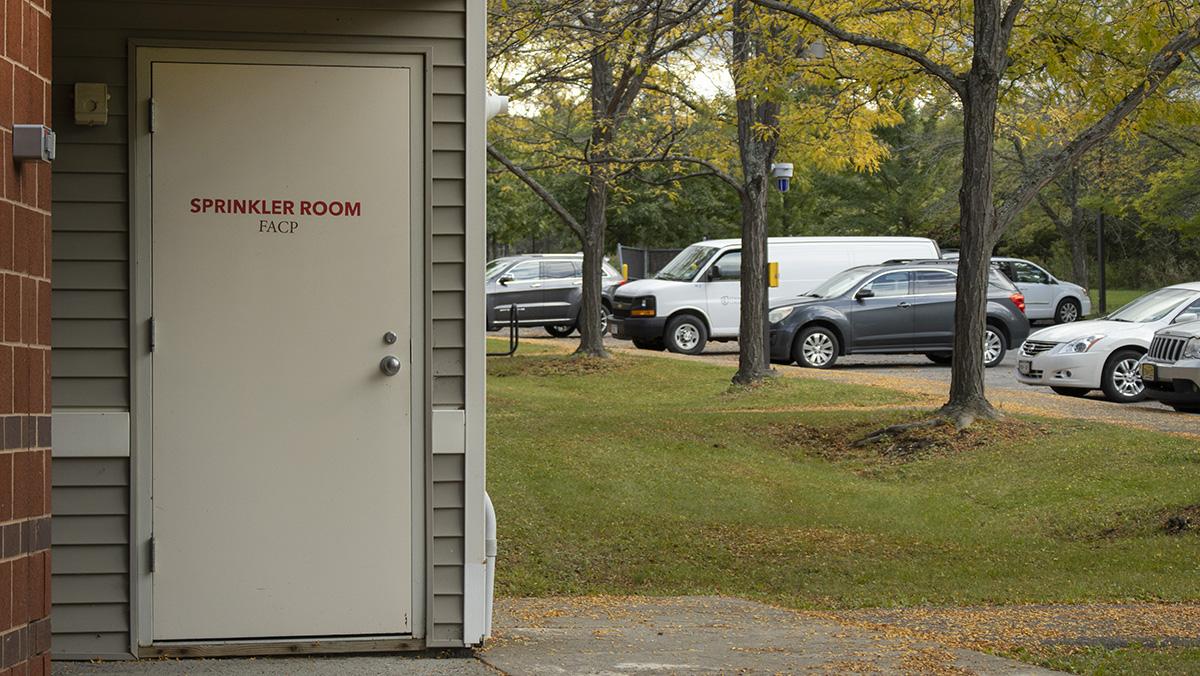 Alyssa Beebe/The Ithacan
There have been 19 fire alarm activations in the Ithaca College Circle Apartments during September. Many of the activations were because of students burning food in their kitchens.
By Olivia Stanzl — Staff Writer
Published: September 30, 2021

The 2021–22 academic year at Ithaca College has started off with 19 fire alarms being set off in the Circle Apartments throughout the month of September.

In a Sept. 23 email sent to Circles residents, Megan Williams, assistant director of staff and programs in the Office of Residential Life, said that 16 out of 19 of the alarms occurred because of food being burned on the stove, in the oven or in the microwave, and that more fire alarms could potentially prompt the Ithaca Fire Department to launch an investigation into the college. The Circles house juniors and seniors, many of whom are living on their own for the first time. The apartments are fully-furnished and have kitchens that contain full-sized electric appliances, including a dishwasher.

Junior Julia Spruance said she is in her second semester living in Circles. She said living in the apartments here has created a much more positive space for her and her roommates because they have their own kitchen, compared to living in the dorms, where they had to eat at the dining halls.

“We honestly hated the food, and two of my roommates have food allergies and found it hard to find food they could actually eat in the dining halls,” Spruance said. “So by having access to our kitchen, we are able to make really good and healthy food that wouldn’t be able to be found through the dining halls.”

Spruance and her roommates have not set off any alarms themselves, but have been woken up twice this semester by fire alarms going off in their building.

“It’s really annoying to be woken up in such an abrupt way,” said Spruance. “When a fire alarm goes off in any of the apartments within one building, everyone’s alarm goes off.”

Junior Mercedesz Stumpf is living in Circles for the first time and said she and her roommates cook all their own meals.

“This is the cheaper and healthier option,” Stumpf said.

Stumpf has never personally set off a fire alarm, but said her housemate has while cooking. Stumpf said she has been negatively affected by the fire alarms this academic year.

“The fire alarms are super stressful for my roommate and I,” Stumpf said. “She has a cat, and it’s always a struggle to rescue him because he gets scared.”

A high number of fire alarms is typical for the beginning of academic years. Tim Ryan, assistant director of Environmental Health and Safety, said that while the numbers may be up a little bit from past years, they are just about on track.

The alarms have also been set off due to steam buildup from hot showers. Ryan said Circles has also had two fire alarms go off this semester because of a short circuit.

“After a device gets steam from a shower several times, it may develop what we call a short circuit,” Ryan said. “If the short circuit goes the wrong way, it’s going to trip the alarm.”

This is not an issue specific to the college. All over the nation, institutions are dealing with issues like burnt popcorn and steamy showers. In 2019 the Ball State University Police Department made a Facebook post that gave students cooking tips.

The National Fire Protection Association (NFPA) is a global, self-funded nonprofit organization that is devoted to eliminating death, injury, economic and property loss due to fire, electrical and related hazards. According to the NFPA, roughly six out of seven fires in dormitories are started by cooking. Reported fires in dormitory-type buildings were cooking related 87% of the time. They also found that the months of September and October had the highest rate of fires in dormitories.

Junior Matt Fabian said it can take a few weeks to understand how to properly cook by oneself.

“It’s just like anything, it’s new so everyone’s going to have to take a little bit of time to learn to get to the routine of things,” Fabian said. “Like getting a basic idea of what you have to cook and how you have to cook it.  A couple of weeks and you’re good to go pretty much.”

Fabian said he does not have a meal plan, which he believes is common for people living in Circles. Students who live in Circles are not required to have a meal plan. They are offered a commuter and on-campus apartment meal plan which consists of 5 dining hall swipes per week and $400 in Bomber Bucks.

“People in Circles don’t have a meal plan, so they rely mostly on cooking in the kitchen,” Fabian said. “The kitchen is the primary source of food. Like me personally, I cook all my stuff or I go eat at restaurants.”

In order to learn from these mistakes, Residential Life and Environmental Health and Safety stress the importance of using the exhaust vent above the stove. The exhaust vent helps remove excess heat and smoke.

“Public safety officers will respond 24/7,” Ryan said. “We typically have two officers respond at all times and at the same time the fire department is called and they start their response either from the fire station itself by the back entrance to the college or a lot of the times they send a unit from downtown.”