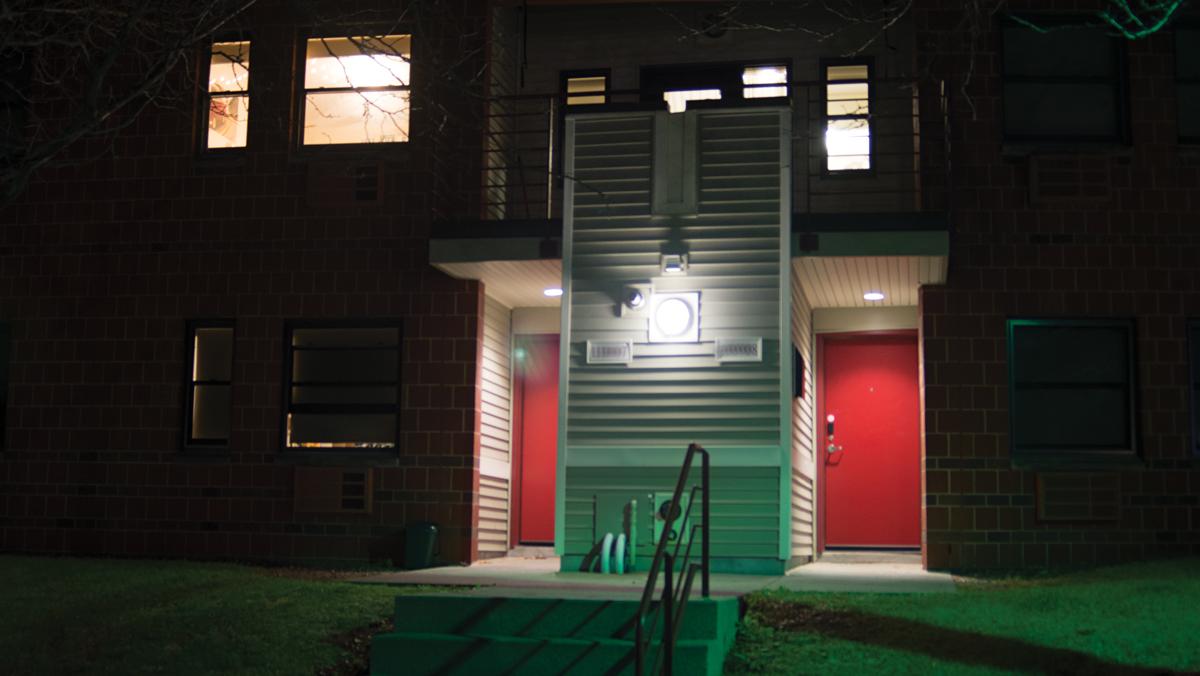 Teddy Zerivitz/The Ithacan
When Circle Apartment residents moved into their apartments for Fall 2017, a slip was given to each resident informing them of the Circles Energy Initiative. Residents had the option to opt out of the program if they did not want to receive the monthly mock bills via email.
By Elijah Joseph — Contributing Writer
Published: November 1, 2017

The energy initiative will allow Circle Apartment residents to receive “mock bills” of their energy consumption. Residents will have the opportunity to understand their impact on the environment and the financial cost their energy usage will have in an apartment where utilities are not included.

Darling said that when he began the program, his goal was to reduce energy usage in the Circle Apartments by making students aware of it. Darling said his main focus was to give students skills that would prepare them for when they moved off campus.

“Here you are in an environment where we can show you what the costs are and you can start to understand what you’re going to face when you graduate,” he said.

The program, which was started as an outreach program, was originally successful. Darling held sessions to show students alternative ways to save energy, how much energy certain appliances in apartments use and how to split the costs with roommates. After the bills were distributed, a workshop was held to show students how to control the thermostat in their apartments.

There was moderate success in the workshops, with about 12 students at each session, Darling said. Darling used the Student Leadership Initiative through the Office of Student Engagement and Multicultural Affairs to get students to participate in sessions. Evans said the reintroduced program will not be holding workshops.

“While I definitely think that’s something we aspire to do, right now we’re really focusing on how to make sure that students understand the information we’re providing them with,” he said. “This is a surprisingly large and intricate program, so we’d like to approach it in steps.”

Collecting energy usage data and matching it with each apartment has been a challenge, Evans said. She said the bills from NYSEG and Constellation do not match up with the Circle Apartments’ addresses, which makes it challenging to assign costs to apartments.

“While not necessarily difficult, the process is certainly time–consuming,” Evans said.

Evans said she has been in contact with Darling to work with him to ensure the program will be as successful as the one in 2015.

“Luckily, we have some information from when this was done before so we can piece everything together,” she said.

Devers said he believes it would be a great program for students who are thinking about moving off campus in the future. He said he wants to use this program as a learning experience for students.

When Circle Apartment residents moved into their apartments for Fall 2017, a slip was given to each resident informing them of the Circles Energy Initiative. Residents had the option to opt out of the program if they did not want to receive the monthly mock bills via email. Apartments that receive a bill are compared to other apartments by the highest or lowest kilowatt hours and the highest or lowest number of thermal units.

“It’s a good way to understand how much energy you’re consuming to prepare students for the real world,” Fernandez said.

Devers said he will also create infographics to help residents read the bills on their own. Residents participating in the program will have the chance to learn how to save energy in their apartments while keeping their utility bills low with the help of the graphics.

Chrissy McAllister, office assistant in the Circles Community building, said she believes the initiative is important for students so they can understand the impact of their energy usage as it pertains to themselves and the environment.

“The sooner they are aware of how their energy usage translates into dollars, the better they’ll be at energy conservation and probably budgeting, too,” McAllister said.

Circle Apartment residents who agreed to partake in the initiative should expect their first mock bill this semester, Devers said.

Brandon Tate, junior Circle Apartment resident, said he was excited for the bills to go out. He said he believes he could manage energy consumption better with the guidance of the bills.

“I feel that my roommates and I definitely waste a lot of energy, and being able to see our energy use may be beneficial in a way where, if we visually see our consumption, it will be easier for us to make a change,” Tate said.

Sophomore Jordan Juliano said he thinks mock bills will be a great learning experience for himself and his housemates. He said that it is important for them to learn how to consume energy effectively.

“For my senior year, I’m already having ideas of living off-campus,” Juliano said. “With the Circles Energy Initiative, I have the chance to learn about energy usage and begin my steps into adulthood.”

When Ithaca College students were presented with a sustainability challenge, it became a war. Junior Brianne Lewis, president of the Residence Hall Association (RHA), said the students from first-year residence halls Boothroyd, Tallcott and Rowland made their enthusiasm apparent in the Hall Wars Competition, a year-long RHA campaign that encourages students to save energy. “[They]…

The Peggy Ryan Williams Center recently achieved the highest possible national recognition of sustainability — a Leadership in Energy and Environmental Design Platinum certification — from the U.S. Green Building Council. The certification aligns the center with the ranks of Ithaca College’s Dorothy D. and Roy H. Park Center for Business and Sustainable Enterprise and…