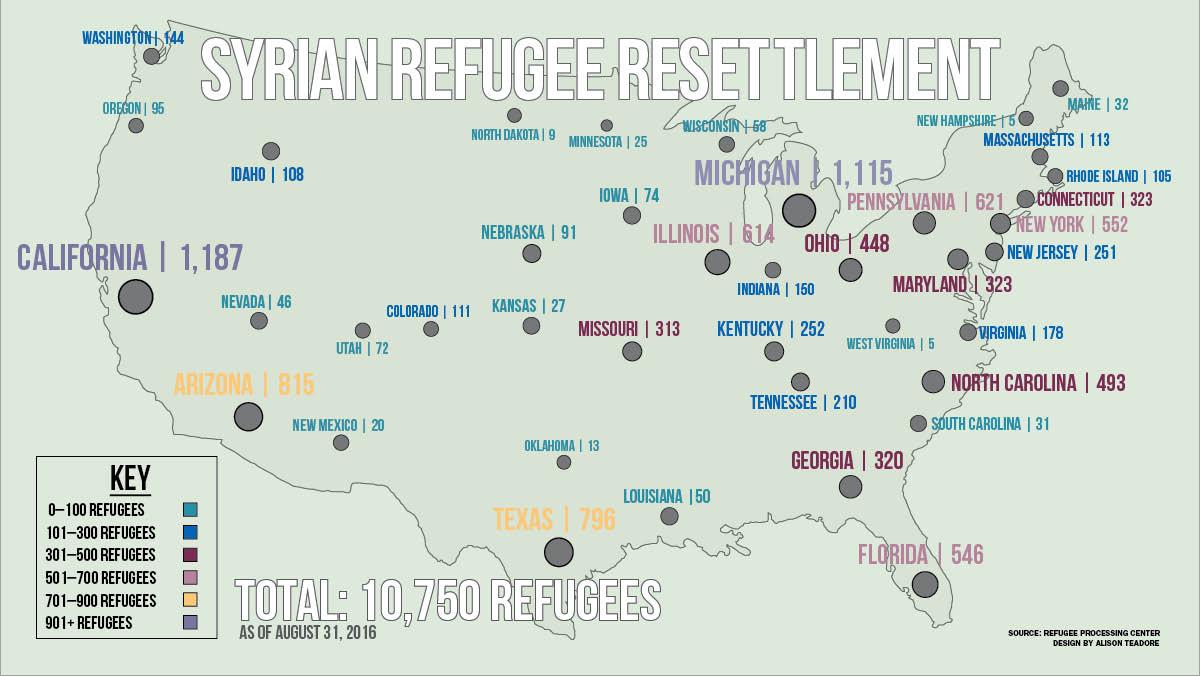 Alison Teadore/The Ithacan
President Obama announced that the United Sates will take in 10,000 Syrian refugees by the end of 2016 fiscal year. Pictured above is where they will be settled — Ithaca is taking 50 refugees who are fleeing from Syria and other conflict zones.
By Erin Conway — Contributing writer
Published: October 5, 2016

The City of Ithaca is planning to take in 50 refugees from Syria, where a civil war has forced nearly 4.8 million Syrians to flee their homes, and from other countries experiencing civil conflicts.

A large majority of the immigrants will be Syrian, but they will also be coming from other countries like Burma, Ukraine, Bhutan and Cuba, said Sue Chaffee, director of the immigrant services program for Catholic Charities of Tompkins and Tioga, the group organizing the resettlement. She said the group wanted to begin accepting refugees after Oct. 1, but is still waiting for approval from the Department of State’s Bureau of Population, Refugees and Migration.

“We will get their housing in place, food in place and cash assistance,” Chaffee said. “We will also help get their kids enrolled in school and adults enrolled in ESL programs, and for the English speakers, we will help them get employment.”

Another nonprofit organization, Ithaca Welcomes Refugees (IWR), has also been helping Catholic Charities and refugees who come to Ithaca. Ashley Meeder, public relations and media coordinator for IWR, said they have also been working with local doctors to help get vaccinations and medical attention to those refugees who need it when they arrive.

“Hospitals and physicians’ offices have been preparing to help, like getting both male and female doctors as well as people to help translate,” said Meeder said.

Chaffee said the city has backed this project with full support. Joseph Murtagh, a second ward alderperson on the Common Council, said he supports accepting refugees into the city and believes that most of the city is also supportive. Chaffee said there has not been too much controversy so far with their plan.

“We had just a personal pushback from people in the community on our Facebook page, but in this area it’s been very receptive,” Chaffee said.

The vetting process the refugees must go through to enter the United States is very thorough, Chaffee said, which makes residents feel safer about allowing them into the community. The vetting system they go through is run by the government and can take up to three years to complete, she said. About 95 percent of the immigrants coming in also have immigration documents, despite widespread concerns, she said.

Last September, President Barack Obama announced the United States would take in 10,000 Syrian refugees by the end of the 2016 fiscal year. That decision to accept more refugees received support and criticism from people across the country. Some have said they are concerned refugees could be a security risk.

Leila Hudson, an associate professor of modern Middle East culture and political economy at the University of Arizona, specializes in Syrian studies and said xenophobia is something to be wary of when refugees are brought to the United States.

“There is a dangerous level of political discourse in the United States right now that has whipped up a great deal of anxiety and fear into the people,” said Hudson.

However, she said she thinks the concerns people may have about immigrants coming to the United States are exaggerated.

“Trends show us that approximately no more than 10,000 refugees get through proper resettlement, and the vast majority are in Europe,” Hudson said. “The immigrants coming here are extremely well-vetted, especially compared to those relocating in the Middle East and Europe.”

Hudson said what Catholic Charities is doing by welcoming 50 refugees to Ithaca is a small start, but a good one.

“Any city with these pilot projects and experience is a good place to start,” Hudson said. “The local city mobilizing against the larger climate of xenophobia is always a good thing.”

Murtagh said he understands the concerns people have when refugees are accepted into the country, but he thinks people in Ithaca are open to the idea and that 50 refugees is not a huge number.

“We aren’t accepting huge numbers like Europe. Most recognize that 50 isn’t a big deal,” Murtagh said. “We are talking about people in dire states that need help, and for most people I know and represent, it’s not a big deal.”

Ithaca is not new to accepting refugees. According to the NYU Steinhardt School, in 2010 Ithaca and Syracuse accepted over 3,000 Burmese refugees. Barbara Adams, an associate professor in the Department of Writing, said she has been involved with an organization called Ithaca City of Asylum for 15 years. Adams said what Catholic Charities and IWR are doing for these refugees is admirable.

“I think Catholic Charities and Ithaca Welcomes Refugees is doing good work so far,” Adams said. “I think it’s exciting that we may, as a city, be able to host so many refugees.”

Ithaca activists speak out against war