Class of 2014 to enter into favorable job market 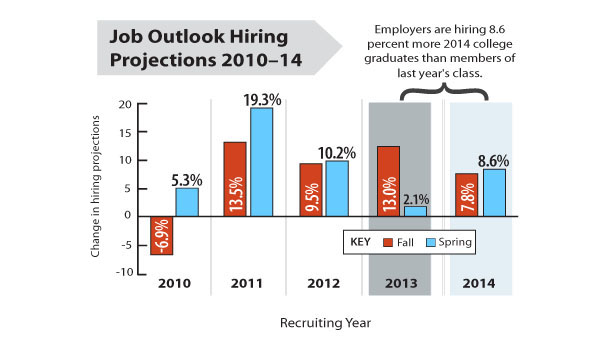 On May 18, the students of the Ithaca College Class of 2014 will receive their diplomas and begin a new chapter in their lives where some will find internships or go to graduate school, whereas others will begin full-time jobs or enjoy some time off.

John Bradac, director of the Office of Career Services, said the job market this year is outstanding for graduates on a job hunt. Since last year, he said, there has been a significant increase in the number of jobs offered to students through both career fairs and eRecruiting, an online resource students can use to help them find potential jobs and internships.

“Things are going very much in the right direction as long as a student prepares themselves, has a sense of their career and career direction and then actually applies themselves,” Bradac said.

Senior Georgina Morley, an integrated marketing communications major, had a strong interest in her chosen field from the beginning. After graduation, she will begin working with the beverage manufacturer Bai Brands, specifically in community management and running social media for their line of five-calories-per-serving drinks.

Though the marketing industry is considered to be large, Morley said she feels prepared enough to take on any job within her field of work thanks to her experience at the college and her passion for the IMC program.

Mimi Collins, director of communications for NACE, said when the organization began surveying employers earlier this year, they only looked at those who were hiring in the United States. Collins said this is different from previous years, so making comparisons between now and a few years back has proven to be tricky.

Collins also said these employers are highly interested in hiring new college graduates, which is hopeful as the market for future graduates is increasing.

However, Collins said graduates should make sure they continue to send in great applications and make a good impression in prospective interviews, regardless of the current job market, as they won’t necessarily be guaranteed positions.

Senior Katie Williams said she was able to find a job in advisory services at Ernst and Young, an international accounting firm, while on a recruiting trip with the business school to New York City where she connected with alumni. She said despite the fact that she’s heard from alumni and friends how stressful accounting can be, she’s excited to begin her new job.

While many graduates take full-time jobs, others turn to alternative options. NACE’s 2014 Internship & Co-op Survey showed that employers plan to hire 1.3 percent more bachelor’s degree–level interns and 3.3 percent more students at a bachelor’s-degree level than in 2013.

Valerie Loucks, a sixth-year physical therapy major, said she plans complete her final internship this summer before taking her licensing exam in July for the state of Texas. Loucks has already completed three internships for her PT major.

“I’ve done one [internship] in an inpatient facility, another in an outpatient facility with more orthopedic injuries and then my last was in a school setting,” she said.

Senior Meredith Sager, another IMC major, said she has chosen to take a job outside of her area of study by pursuing a position at New England Center for Children, a residential school for kids with autism in Southborough, Mass.

Sager said this sudden switch in interest was influenced by her extracurricular activities, which included volunteering with the Special Olympics and serving as the president of the IC Autism Awareness Club. Sager said courses she took for her minor in deaf studies, including “Understanding Disabilities” and “Developmental Psychology,” also inspired her in this direction.

Despite finding a new passion late in the game, Sager said she has been able to adjust her skills for this new job by building on her experiences as a student at the college.

“I’ve learned a lot of things that will translate into anything that I do: how to speak well, how to make visually appealing things, how to talk to all different kinds of people,” Sager said. “So I’m not going to be working directly in the field, but I’m going to be utilizing the skills I’ve learned.”