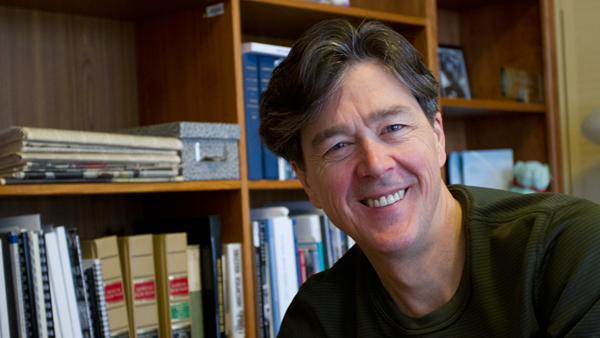 Mark Hertsgaard, independent journalist and author of “Hot: Living Through the Next Fifty Years on Earth,” discussed and took questions on his research on climate change and his career as a journalist during his visit to Ithaca College on Friday in Emerson Suites.

The college’s Sustainability at Ithaca College initiative hosted Hertsgaard through its co-sponsorship with the Climate Smart and Climate Ready conference that took place in Ithaca and Cortland April 18-21. The conference focused on how everyone, including businesses and governments, can help decrease the amount of carbon emissions that come from burning fossil fuels and prepare for the impact of the changing climate.

Hertsgaard opened the discussion by talking about the British Petroleum oil spill, which happened three years ago. He said BP covered up the cleaning process of the spill and that there is still oil in the ocean, just more dispersed throughout. Hertsgaard said corporations similar to BP are the reason for the change in the planet’s climate and other environmental degradations.

Hertsgaard’s words really struck a chord with sophomore Gregory Broslawski, who had not fully realized the effect the media can have on environmental issues.

“I think the biggest take-home message, for me at least, was that the media, journalism in particular, has done far more to bring awareness to the environmental movement, especially in bringing the ‘secret lives’ of major corporations to light,” Broslawski said.

Hertsgaard said a community that works together to care for the environment can have a bigger impact by rallying and protesting for the government to create better laws and policies.

“You are going to live the rest of your lives in the face of rising temperatures,” Hertsgaard said to the audience. “[Taking to the streets] is the only way that you can force politicians to stand up to these companies and get results.”

Hertsgaard backed up this claim of rallies being effective with historical facts.

“Forty-three years ago this Monday [April 22] was the first Earth Day,” Hertsgaard said. “On that day, 20 million people protested for environmental change, and it is because of those protestors that President Richard Nixon created the environmental legislation the United States has today. These legislations include the [National Environmental Policy Act], the Clean Air Act, the Clean Water Act and the Endangered Species Act.”

Today, Hertsgaard said, environmental rallies have lost their radical roots, and for protests to be effective, they must have a sense of immediacy.

“If not now, when?” Hertsgaard said. “This is the fight of your generation.”

Assemblywoman Barbara Lifton, who attended the event, pointed out that there are many routes to environmental change.

“It’s so important just to do those basics of registering to vote and then actually going and voting,” Lifton said. “You want to look at those congressional races and find good candidates and support them.”

Staff writer Megan Devlin spoke with Hertsgaard about his book, the state of climate change and how to reduce human impact.

Megan Devlin: In “Hot,” you describe two approaches to climate change: adaptation and mitigation. Can you describe the difference between the two?

Mark Hertsgaard: There’s a great quote in [the book] from Suzanne Moser, where she says, “If I had $2 to spend on climate change, I’d spend $2.50 of it on mitigation. That’s how important it is to keep global warming from getting out of hand.” So people can understand the difference. Mitigation is most of what you think about, you as the average citizen and news consumer, when people talk about global warming or climate change. It’s about getting off of oil, off of fossil fuels, switching cars to electric, stopping coal-fired power plants, stopping fracking — the big issue here in New York. All of that is very important, but now there has been a paradigm shift, and we have to do adaptation and prepare for the impacts that are happening.

MD: How do adaptation and mitigation apply to the reaction to Hurricane Sandy? How would you analyze the natural disaster response?

MH: It was, as we even heard on the news at the time, a super storm. It was kind of a hurricane but really a different animal. It was so large. These are the kinds of weather events we’ll see more of. It’s encouraging that Mayor Bloomberg, in particular, made New York City relatively ready for this, precisely because the Bloomberg administration has taken climate preparation very seriously for 5 years now, and I report this in “Hot.” They were not hurt as badly as they could have been. Contrast that to the state of New Jersey, where Governor Christy has, like most Republicans, been very almost derisive of climate change — or at least had been before Hurricane Sandy. Their coastlines were completely unprepared for this, and they suffered terrible losses … Going forward is really where the test will come. Are these governments, New York and New Jersey in particular, really going to step up and do the kind of adaptation planning and, above all, implementation? It takes money to do that.

MH: In addition to voting, what’s important is being a full active citizen. That means getting out there and pushing your elected officials by doing things like going to marches, writing letters to the editor of the media, doing protests that are now focused on the Keystone Pipeline, getting your college to divest from fuels … One of the roles of a citizen activist is to bring these contradictions to the fore. Many practices of society can only be sustained if they are done in the dark. Once you put a light on it and you make an issue of it, it’s a lot harder to go forward.

MD: Currently, many Americans are uniformed about politics or feel depoliticized. Why should they care about being active in stopping climate change?

MH: All of the big public decisions that will shape your life, including whether you have a livable planet by the time you’re middle aged like I am, are government decisions. Whether Social Security still pays, whether there is a healthcare system, whether your younger brother or sister is going to be shipped off to another idiotic war — those are all decisions of politics. You may think you’re not interested in politics, but politics is interested in you.

MD: What is the role of independent media in covering issues like climate change, and why is it so important today?

MH: I’ve startled both worlds. I’ve worked in the progressive media — The Nation, Mother Jones, Pacifica — but I also work for the mainstream. But I have never held a mainstream job for very long. The closest I came was as a columnist for Rolling Stone and a commentator for NPR. Both places I was fired for being too outspoken … I have no illusions about how the mainstream media works. They’re not there to educate the public, or even expose wrongdoing and hold public officials accountable. They are part of the power structure, much more than apart from the power structure. That’s a problem.

MD: What do you hope to share with students and take away from your visit at Ithaca College today?

MH: I hope to go make some noise, but with them not at them. For me, it’s always a real pleasure to talk with college students, because they are bright, animated, idealistic, energetic and passionate, and those are the kinds of qualities we need if we’re going to turn this around. And, I will plead for their help in fighting climate change. I covered the climate fight for 15 years before I became a dad. Once I began a dad, it became very personal. It was no longer just a political or journalistic interest … I realized that as much as I try to do to fight climate to change, to make sure that my now eight-year-old daughter has a livable future, I can’t do it alone. I literally cannot save my daughter’s life without the help of other people. So I will be asking for their help.