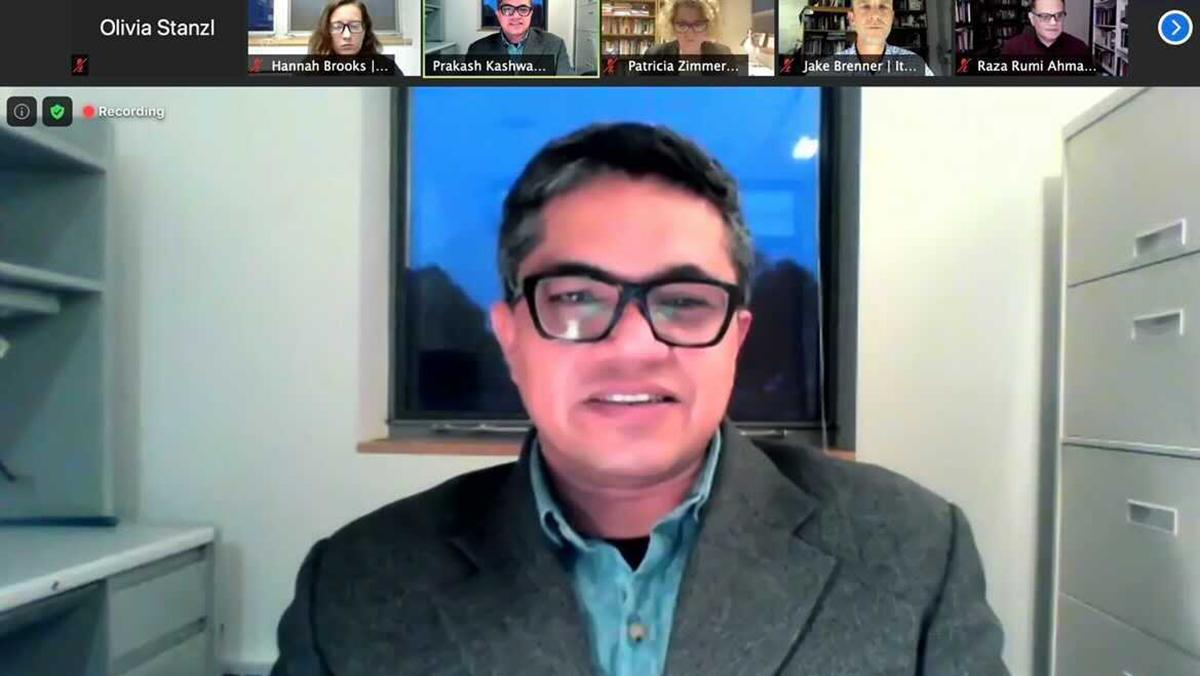 Courtesy of Ithaca College
The event took place over Zoom and 35 people attended. The conversation covered Kashwan’s — a political science professor at the University of Connecticut, in Storrs, Connecticut, and climate and environmental justice advocate — experience with the complementary studies of the environment and politics. The event was moderated by Brenner, associate professor and chair of the Department of Environmental Studies and Science.
By Olivia Stanzl — Contributing Writer
Published: October 27, 2021

The event took place over Zoom and 35 people attended. The conversation covered Kashwan’s — a political science professor at the University of Connecticut, in Storrs, Connecticut, and climate and environmental justice advocate — experience with the complementary studies of the environment and politics. The event was moderated by Brenner, associate professor and chair of the Department of Environmental Studies and Science.

Kashwan’s experience includes being co-director of the economic and social rights research program at the University of Connecticut’s Human Rights institute, being a member of the transformative change assessment scoping experts and being an international studies association member. He also co-founded the Climate Justice Network.

Kashwan also wrote the book “Democracy in the Woods: Environmental Conservation and Social Justice in India, Tanzania, and Mexico” and is the co-editor of the Journal of Environmental Politics.

The conversation focused on the interdisciplinary nature of environmental studies and sciences.

“I think no one is better prepared to talk about that than Dr. Kashwan himself,” Brenner said.

Kashwan mainly discussed how the entire institutional structure of nature conservation — protection of species from extinction, maintaining and restoring habitats, enhancing ecosystem services and protecting biological diversity — has been set up to exclude locals out of national parks and wildlife sanctuaries.

“The main argument here is that today’s global conservation emerged during the colonial times when the prevailing system and consensus was that poor people out there in Africa and Asia were too ignorant and illiterate to care about the environment,” Kashwan said. “So white men, colonial researchers and scientists needed to conserve these wildlife, biodiversity and other natural resources and protect them from hungry and ignorant people. That was literally the underlying motivation for the origins of global conservation.”

Kashwan’s argument was that the entire institutional structure for promoting global conservation was meant to exclude people, and more specifically, local people, out of national parks and wildlife sanctuaries. He called this the “fines, fences and firearms” approach.

“These areas are fenced off from local communities, locals are fined really heavily if they’re found inside these parks, and sometimes the park rangers have shoot-at-sight orders or even shoot-to-kill orders,” Kashwan said.

Kashwan explained that the poachers are not the ones being killed, but the locals who are on the land for subsistence foraging. He said the lands where the wildlife reservations and parks reside are the traditional lands of many local communities.

“You can’t shoot the real poachers, you can only shoot poor people,” Kashwan said.

Attendees were welcomed to bring up questions at the end of the conversation. Jason Hamilton, professor in the Department of Environmental Studies and Science, asked a hypothetical question about communities that might harvest rhinoceros while the animal is classified as endangered.

“How do you work with this concept that there’s this greater geographic knowledge of some folks that say at the continental level this rhino is almost extinct and we shouldn’t harvest it anymore versus the local knowledge of people saying well, ‘In my area it’s not almost extinct and so we’re going to continue with our ancestral practice,’” Hamilton said.

Kashwan said local communities have designed rules to monitor the health of the resources that they are harvesting.

Poaching is the illegal trafficking and killing of wildlife, according to National Geographic. From January to June 2021, the Kruger National Park in South Africa experienced 715 poaching activities.

This included 132 rhinos who were poached for their horns and one elephant who was poached for its ivory, according to the Department of Forestry, Fisheries and the Environment in the Republic of South Africa.

Brenner and Kashwan also noted the importance of recognizing the production of knowledge.

Brenner explained there is an inequality and injustice that is created through predominant conventional, conservational models which are founded on some assumptions about expertise and who is the expert.

Kashwan said the scientist by default was the white man who hired local people as laborers. The scientists got information from local communities who shared their knowledge which has been passed from generation to generation.

In many cases, scientists republished that information and claimed it as their own research.

“There’s an increasing  awareness that when we receive knowledge from local communities, we should explicitly acknowledge them and acknowledge them by name and then try to make sure they get the benefits of our research,” Kashwan said.