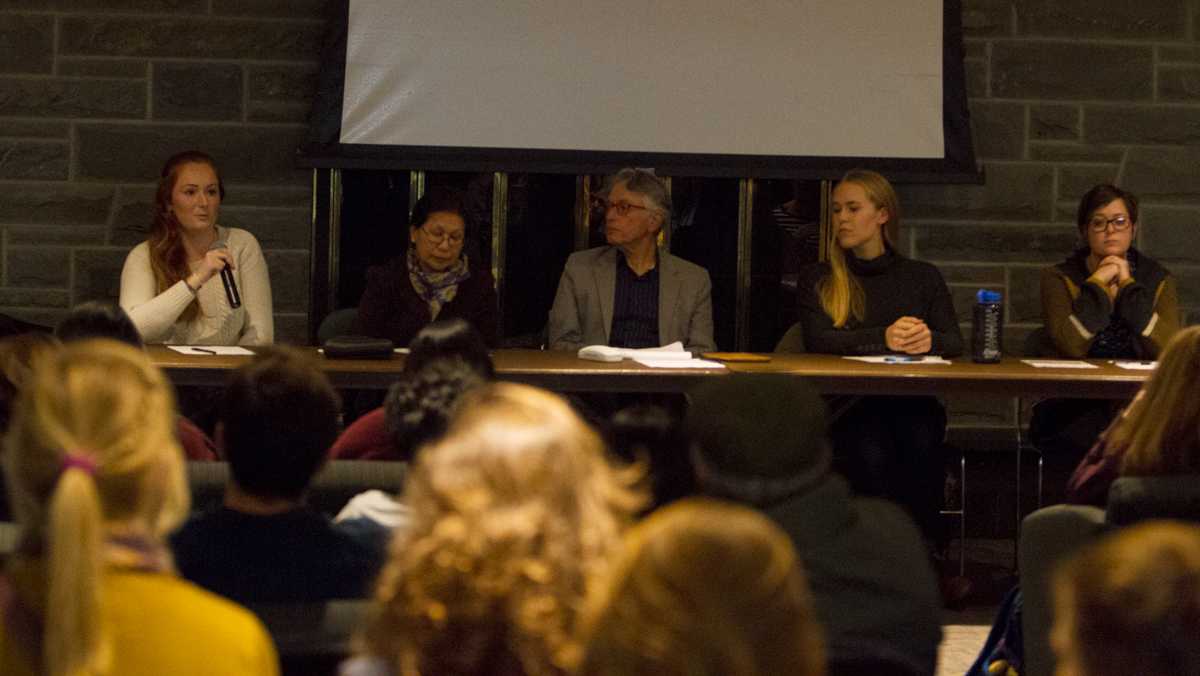 The club’s most recent initiative was on World Toilet Day on Nov. 19 to raise awareness for global sanitation problems. Since this year’s theme was wastewater, the club focused on the lack of usable toilets and clean water around the world. The club held a panel discussion Nov. 13 that was attended by 50 people in anticipation of World Toilet Day. Approximately 4.5 billion people do not have access to basic toilets.

After Nguyen began the discussion, a panel of professors and students began to talk to the audience. The panel consisted of professors who have conducted research on public health and students who have studied abroad. They said change does not happen overnight and that everyone needs to be invested in the water issue for the long haul. They discussed that although it is commonplace to some people to have access to water, it is not to billions of people all over the world.

Sustainability Coordinator Rebecca Evans was also on the panel.

“I believe that I have some sort of obligation as an American of privilege to highlight and bring awareness to those injustices when given the opportunity,” she said.

Sophomore Ly Do, a club member involved in the outreach committee, joined the club her freshman year when the name caught her eye at the Student Organizations Fair. She said she believes the club is good at providing helpful events to increase the community’s knowledge of worldwide issues.

“Being in the outreach committee, I believe that the strength of the club is their unique and helpful events that raise awareness and provide knowledge for everyone,” Do said.

Do said the annual Walk for Plumpy’nut 5K walk that raises money for malnourished children in Ethiopia really stood out to her. This money is used to send them Plumpy’Nuts, a 500,000–calorie paste, which will help restore their health. Plumpy’Nuts have the potential to bring malnourished individuals back to normal health in six to eight weeks.

Food for Thought was founded in 2008 by then–high school student Elizabeth Stoltz ’13. The club is a nonprofit organization that has chapters at various colleges in the country. It became an official chapter at the college when Stoltz introduced it in 2009. Stoltz said she is impressed at the progress the club has made since she founded it over a decade ago.

“I am very humbled that students have just continued to march on and change Food For Thought into their own thing,” she said.

Cyndy Scheibe, professor in the Department of Psychology and adviser of the club, said she wants students to not only leave club events conversing with their peers about the issues, but that they should be taking action as well. She said everyone being aware of their own habits is a step toward taking action. She said she recommends coming up with an agreement at home that will allow for fewer toilet flushes and not letting the water the run while brushing their teeth.

“We all — for things that we care about — we have to find a way to take action, and there’s a lot of things that people can do,” Scheibe said.

Malick Mercier can be reached at mmercier@ithaca.edu or via Twitter: @@ClassyMalick

Robert Egger, founder and president of the DC Central Kitchen in Washington, D.C., will give a lecture titled “Making Nonprofits Responsive: Solving the Interconnected Problems of Poverty, Hunger, and Homelessness” at 7:30 p.m. tonight in Park Hall Auditorium. Staff Writer Kathy Laluk spoke with Egger about hunger and homelessness in America, and the mindset behind…

Founder of nonprofit to speak on humanitarian issues