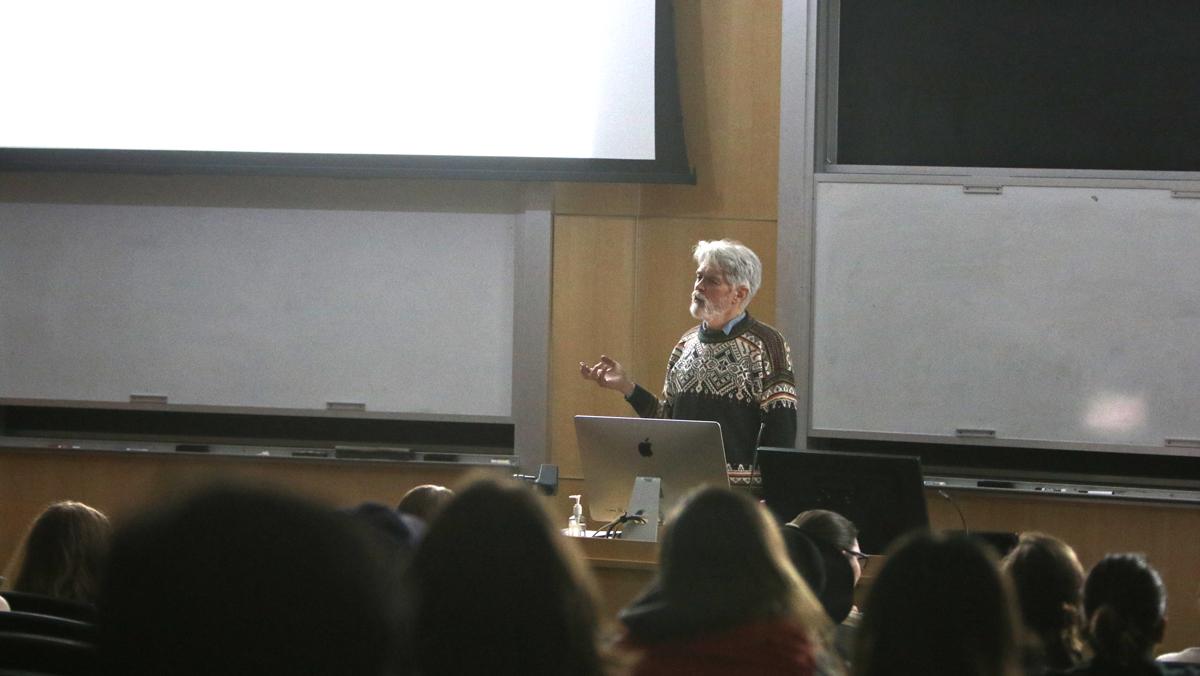 Gurche discussed his work on reconstructing hominids and dinosaurs by using discovered bones and his scientific knowledge of the both species. The event had approximately 25 people in attendance and concluded the club’s weeklong celebration.

Gurche said that through evolution, humans developed a strong connection to nature as part of the great ape tree.

“One of the things that I like best about this perspective is that it helps you see the miraculous in the everyday,” Gurche said.

He said he worked in South Africa to reconstruct the Homo naledi, a newly discovered extinct species of human, in 2014. He also read and discussed portions of his book, “Shaping Humanity.” In the book, Gurche describes the process by which he creates realistic representations of ancient human ancestors. Gurche said he helped produce the “Jurassic Park” films by reconstructing images of dinosaurs for the movies.

He also showed the audience several unreleased drawings for his upcoming book, “Lost in Anatomies,” which comes out in 2019.

“I liked the combination of the art and the anthropology and the idea of the ancestral connection,” White said. “It’s refreshing to think about the human origins and evolution as like everything that’s happening in the world.”

Kasey Gregory, president of the Student Anthropology Society, said anthropology is a very small major and many students are unaware that it exists at the college.

There are currently 39 students enrolled in the anthropology major, according to the Office of Analytics and Institutional Research’s website.

“Our major hope is to make anthropology known,” Gregory said.

Throughout the week, there were multiple events held for World Anthropology Day. Hannah Hale, the treasurer of Student Anthropology Society, said the events were mostly funded by the anthropology department, but the club spent an additional $100 to pay for food and refreshments at events.

Gregory said the club meets every Monday and often travels downtown to discuss anthropology in a setting outside of the classroom.

“Our main goal is to provide a space for a lot of the conversations that you don’t get to have in your classes or in college in general,” Gregory said.

She said the club also holds events for students to have experiential learning experiences. For example, the club once had an event to learn how to make stone, she said.

Rosemary Mulvey, secretary of Student Anthropology Society, said she wants to make anthropology more accessible for students to learn about on campus because she believes many people do not fully understand the broad scope of anthropology. Many believe anthropology is only about dinosaurs, she said.

“It’s a really interesting discipline, especially in this sociopolitical climate, to understand and know about,” Mulvey said. “It brings a different kind of perspective.”

Hale said most people do not think about humans when they think of anthropology, yet they are a central part of the field of study.

“Our goal is to raise awareness that anthropology is a thing,” Hale said. “It’s trying to make people aware that it’s not dinosaurs. It’s people and culture.”

Mulvey said the club also offers many opportunities to bond with other anthropology majors. She said the club goes to the Sacred Root Kava Lounge & Tea Bar, a restaurant downtown, every semester. The club also regularly participates in activities such as watching anthropology-related documentaries and television shows and meeting with professors for archaeology and biology labs.

“I think my favorite part of SAS is the friendships I’ve made as a part of it,” Mulvey said.

Hale said the club is important to her because she has had the opportunity to meet people with similar cultural interests.

“I get to be with people and do things with people that have a like-mindedness,” Hale said.

Hale said the club wanted to hold an array of events for World Anthropology Day to show that anthropology is a diverse field.

White said she decided to declare an anthropology major in honor of World Anthropology Day. She said she attended every event of the week, furthering her appreciation for the field.

With Information Technology Services in its new location in Job Hall, construction is nearing completion for the Office of Career Services to move into the space vacated by ITS in Muller Center.

Phillips Stevens Jr., associate professor of anthropology at the University at Buffalo, will be addressing the pros and cons of the role of anthropology in the military at 7 p.m. tonight in Textor 103. Stevens will talk about the controversy concerning the Human Terrain System — a group of anthropologists working with military personnel. Supporters…