Applause, music and confetti filled the Athletics and Events Center as Ithaca College President Shirley M. Collado was inaugurated as the college’s ninth president on Nov. 4, 2017.

Collado’s inauguration took place during the weekend of the college’s 125th Anniversary celebration, as well as the annual Family Weekend and Alumni Weekend. Hundreds of staff, faculty, students, parents, alumni and Ithaca community members gathered for the event. During the ceremony, members of these different constituencies stood by to officially welcome Collado to the community.

Julia Alvarez, author, poet, writer–in-residence at Middlebury College in Vermont and a close friend of Collado’s from their time together there, spoke at the ceremony. Freeman A. Hrabowski, III, president of the University of Maryland in Baltimore County and a colleague of Collado’s in the higher education community, also addressed the audience. Poet A. Van Jordan, a professor at the University of Michigan and Collado’s husband, read, for the first time at the inauguration, a poem about being good to our neighbors in the country’s current political landscape.

Collado was announced as the new president in February and assumed the position July 1. Former President Tom Rochon retired from his presidency after protests at the college concerning his administration’s handling of racial bias and campus governance.

Tom Grape ’80, chair of the Ithaca College Board of Trustees, introduced and installed Collado as president. For her introduction, Grape gave a speech about Collado’s qualifications, putting an emphasis on her capacity to care and her knowledge of the higher education community.

“She is leader who works hard to ensure that higher education can become a catalyst for personal growth, social mobility and community impact,” Grape said. “She cares deeply about students, about their academic and professional development, their personal and social well-being and their ability to thrive in college and in the rest of their lives. She understands today’s complex higher education landscape and anticipates the kind of changes that are on the horizon.”

In her inaugural address, Collado talked about how she hopes to form an inclusive, intellectual campus that rejects the current political and social boundaries.

“In our country right now, we are seeing what happens when people hide, when they act on their fear, their bias, their rigidity of thought,” Collado said. “When boundaries disappear, we can realize the full potential of a residential campus where everyone is welcome to practice deep intellectual inquiry and everyone is empowered to collaboratively create and consume knowledge.”

Hrabowski spoke about Collado’s generosity and integrity. He said he was eager to see the changes she would make, and said she would have a positive impact on the college, especially during the current time of political turmoil in the country.

“Ithaca, you have been preparing for years for this moment,” Hrabowski said. “This is the president who listens carefully, who will ask questions, who will do her homework, who will speak with compassion, who will have the hand and heart involved.”

Alvarez said she was pleased with what Collado’s presidency as the first Dominican-American college president meant for inclusivity and diversity in the academic community.

“We Dominicans, as you can tell, are very proud of our own, and not only of our baseball players,” Alvarez said. “Shirley’s roots might be on a half–island in the Caribbean, but she is not peninsular in her concerns for leadership. She is all about collaboration across borders, about empowering others and building Martin Luther King’s beloved community together.”

In addition to those who spoke at the inauguration, members of the community expressed their confidence and excitement for Collado’s presidency.

Walter J. Smith, a former member of the board of trustees for 10 years, said Collado’s background and experience is what the college needs to rebuild and improve itself in terms of bringing in more students from various academic and socioeconomic backgrounds.

“She’s a natural leader, and she’s got the gifts of both mind and heart,” Smith said. “Many presidents have great gifts of mind, but few gifts of heart. I think she’s going to be both a healer and a rebuilder of Ithaca College.”

Members of the Ithaca College Alumni Association expressed their excitement for Collado’s inauguration and said they are optimistic about her presidency and the impact she will have on campus in the coming years. Chris Lee ’10 said that Collado has already successfully engaged with faculty, staff, students and alumni, especially with the alumni board. 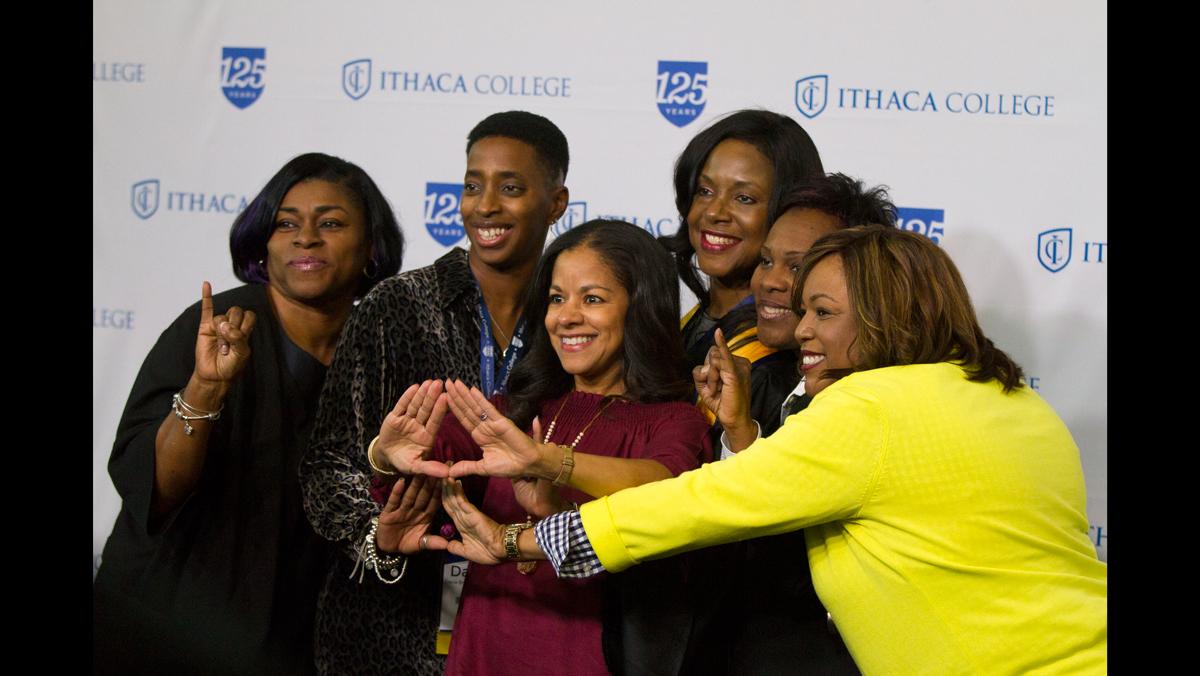 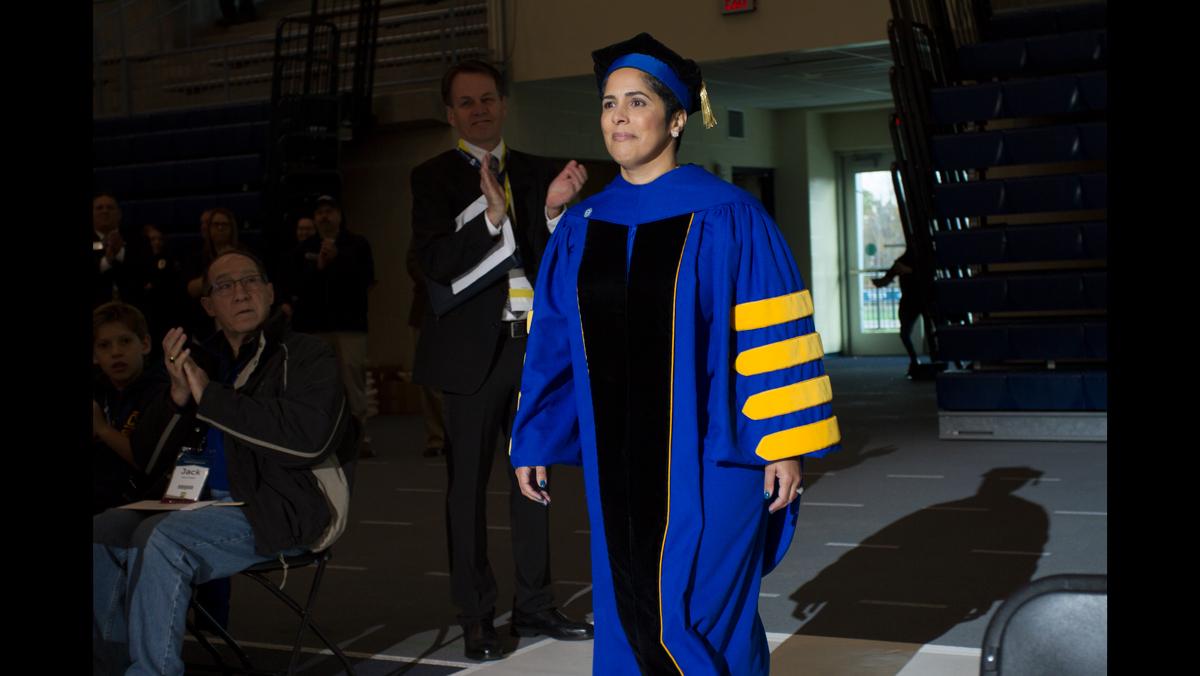 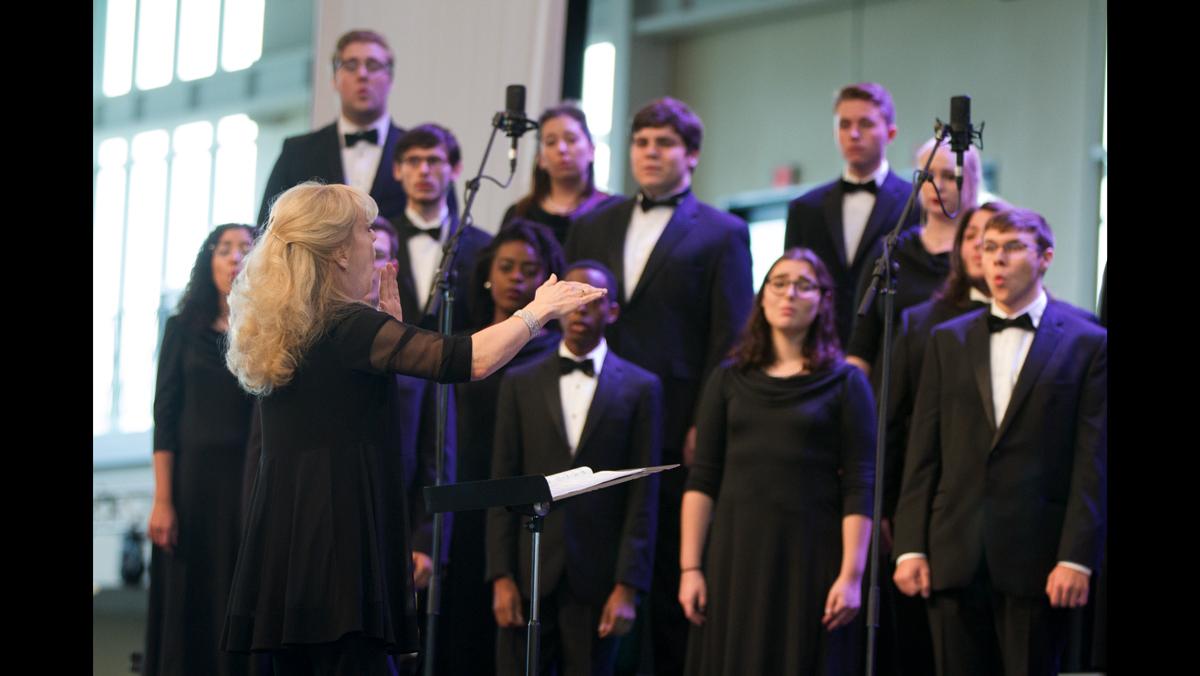 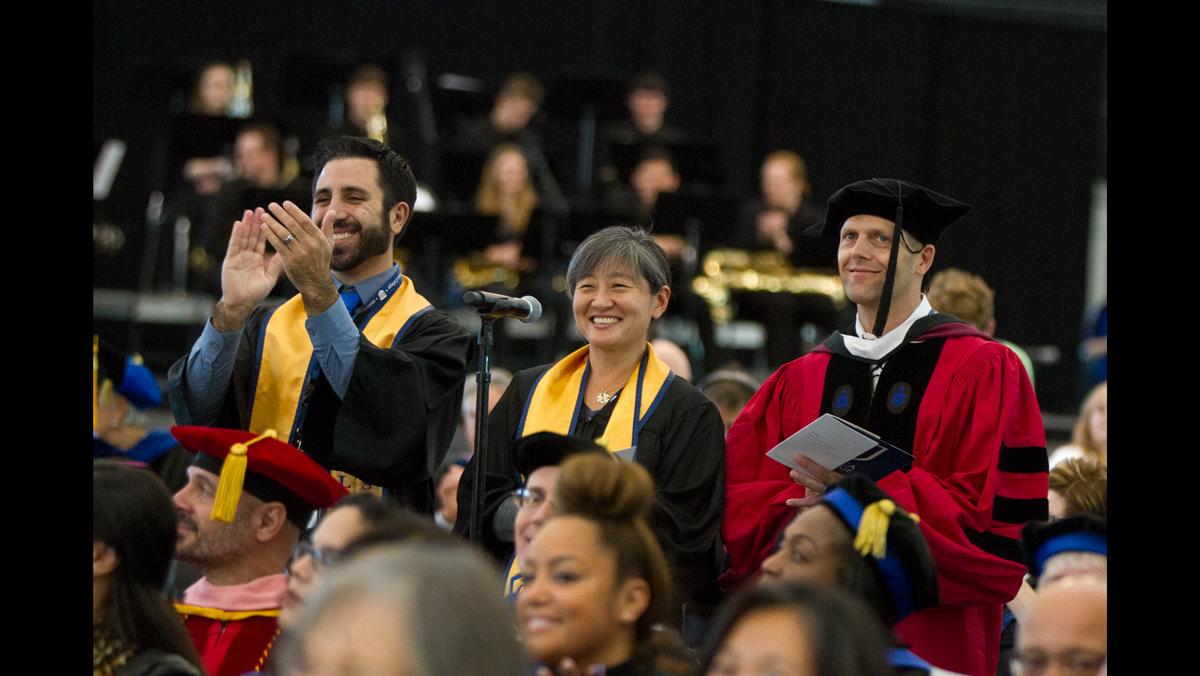 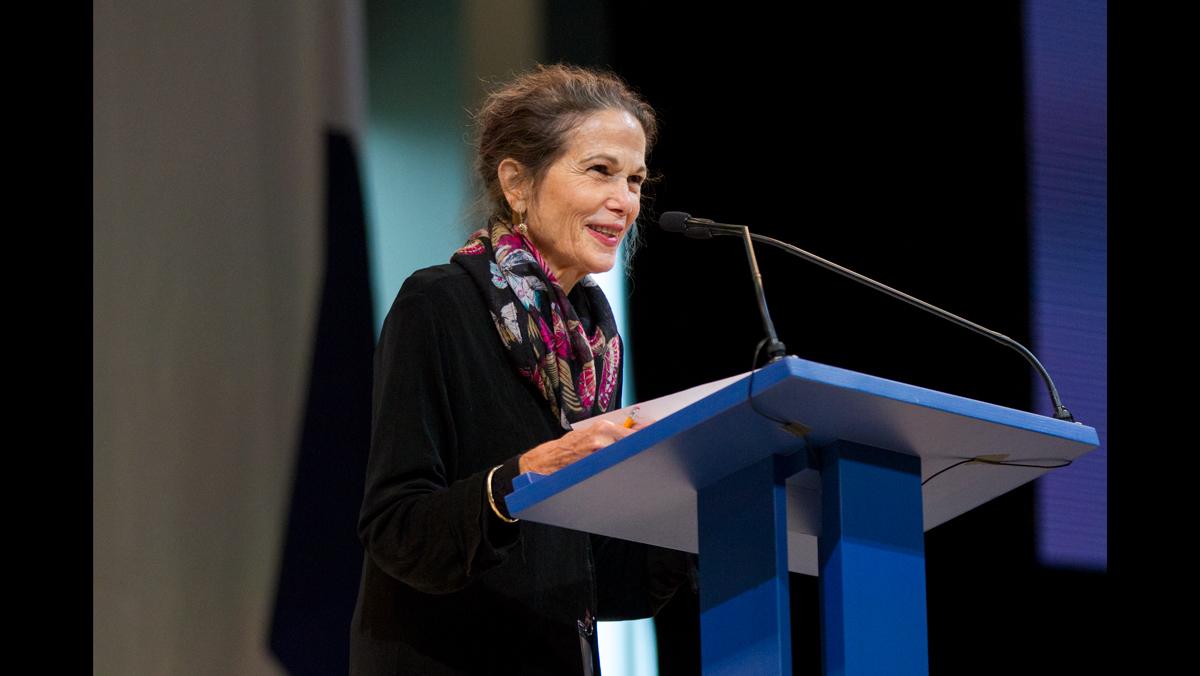 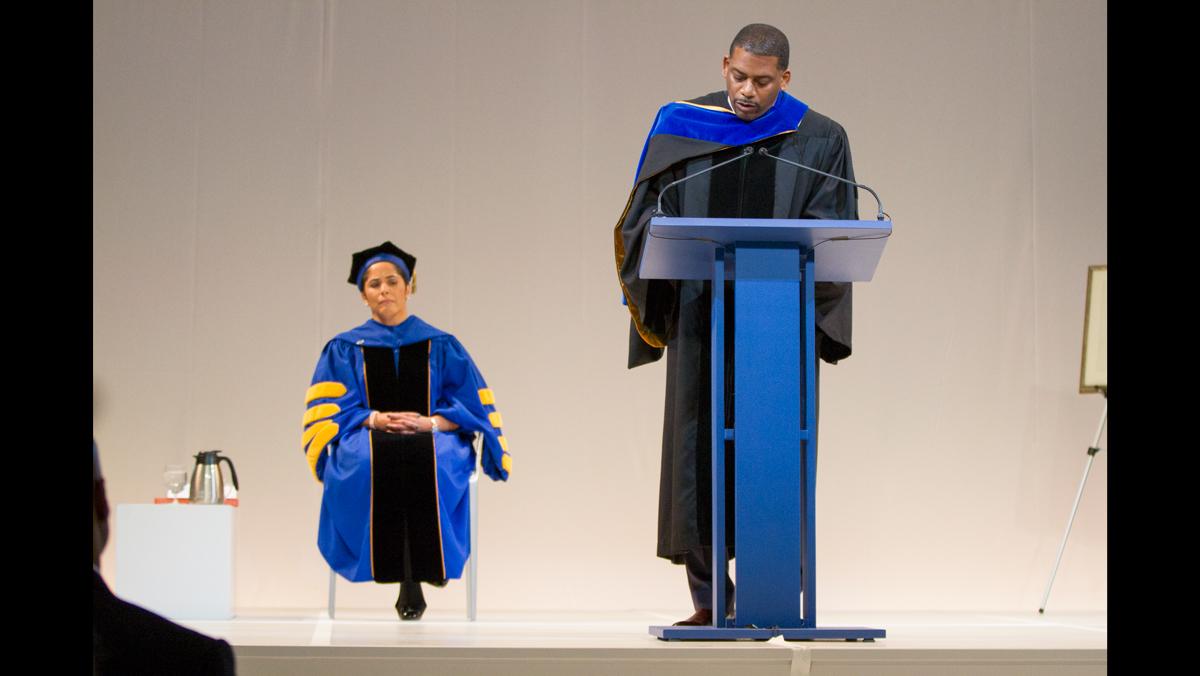 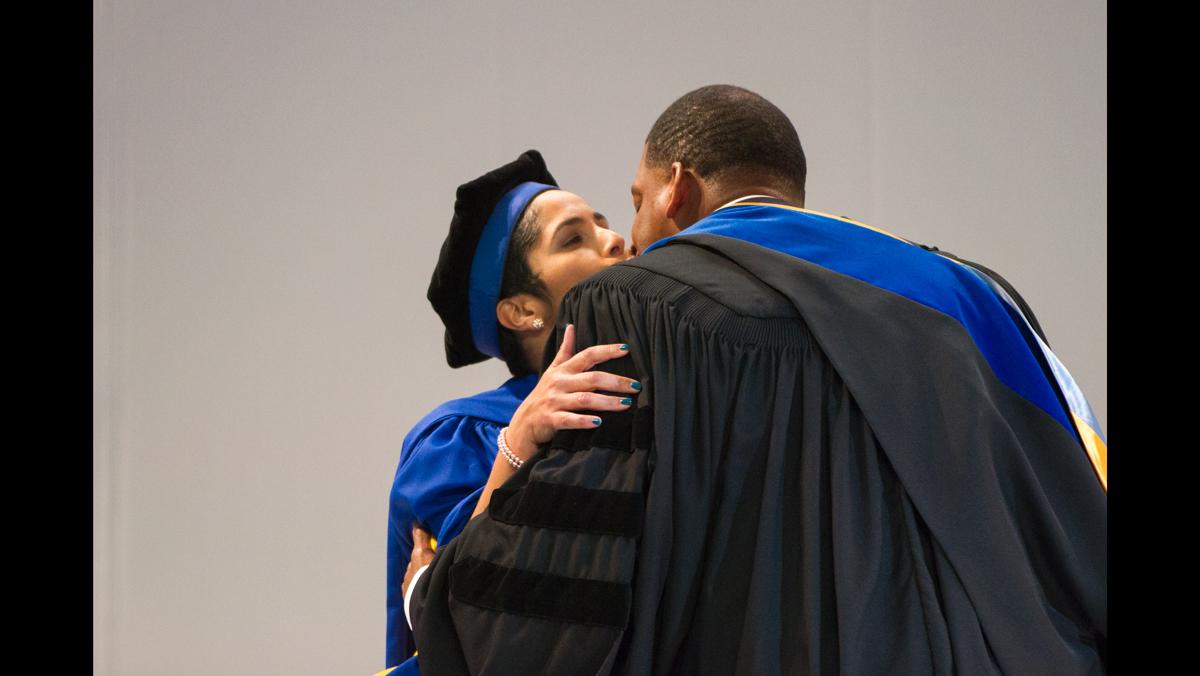 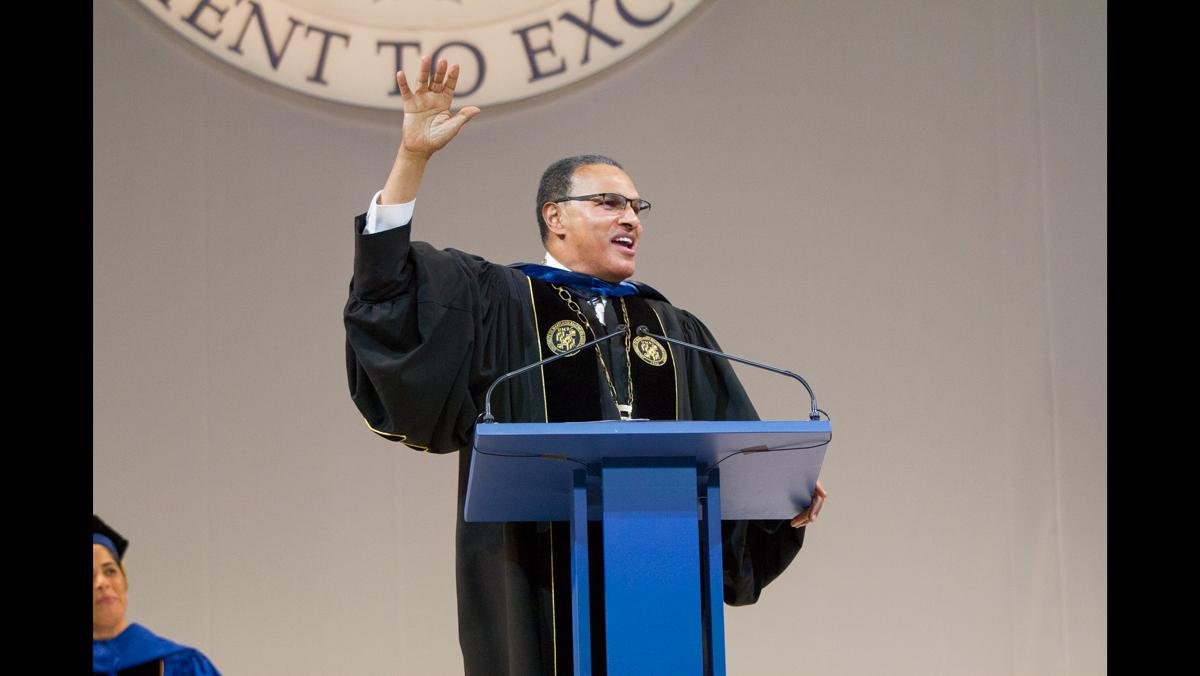 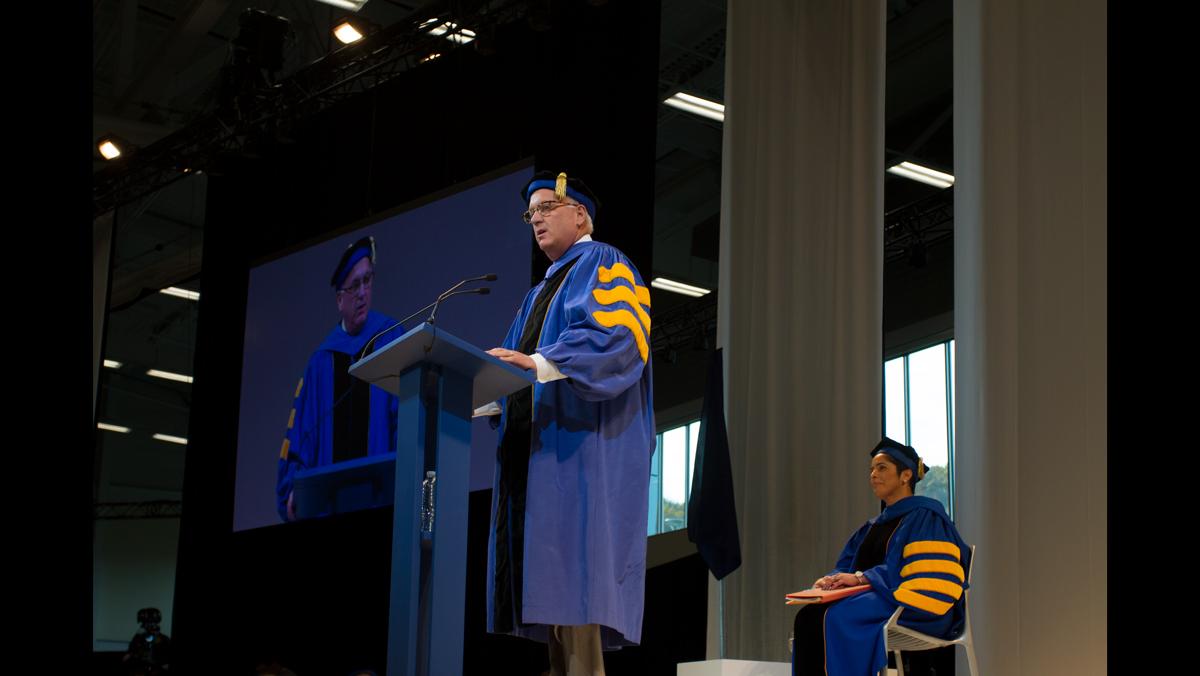 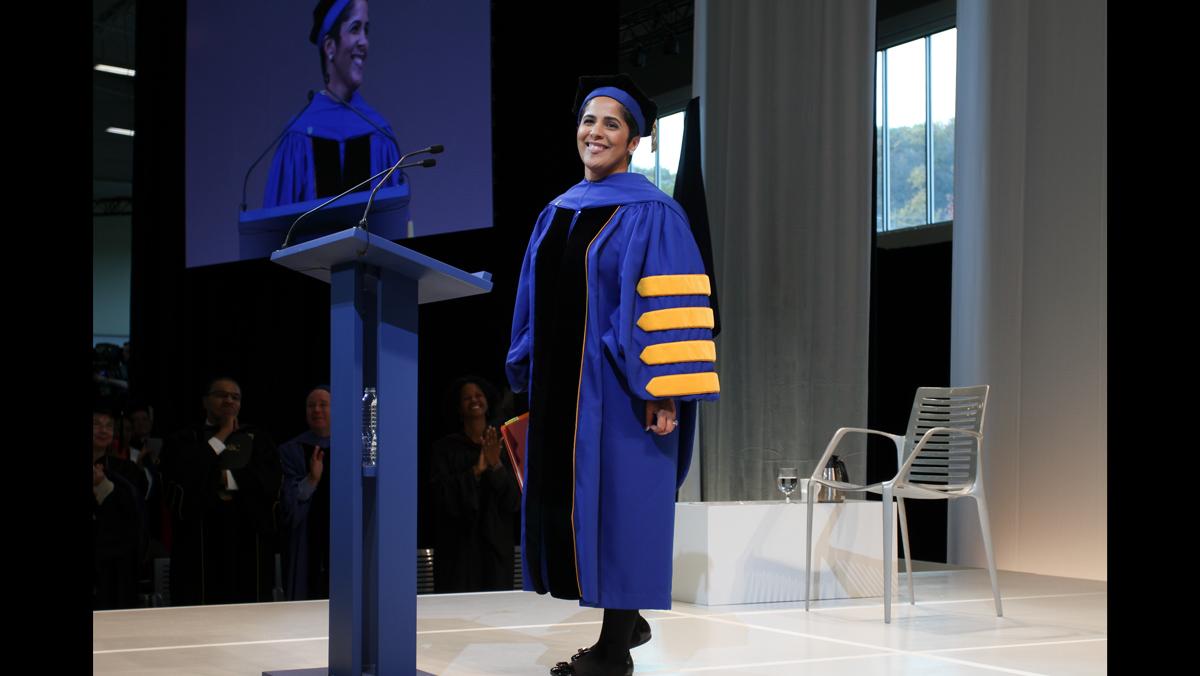 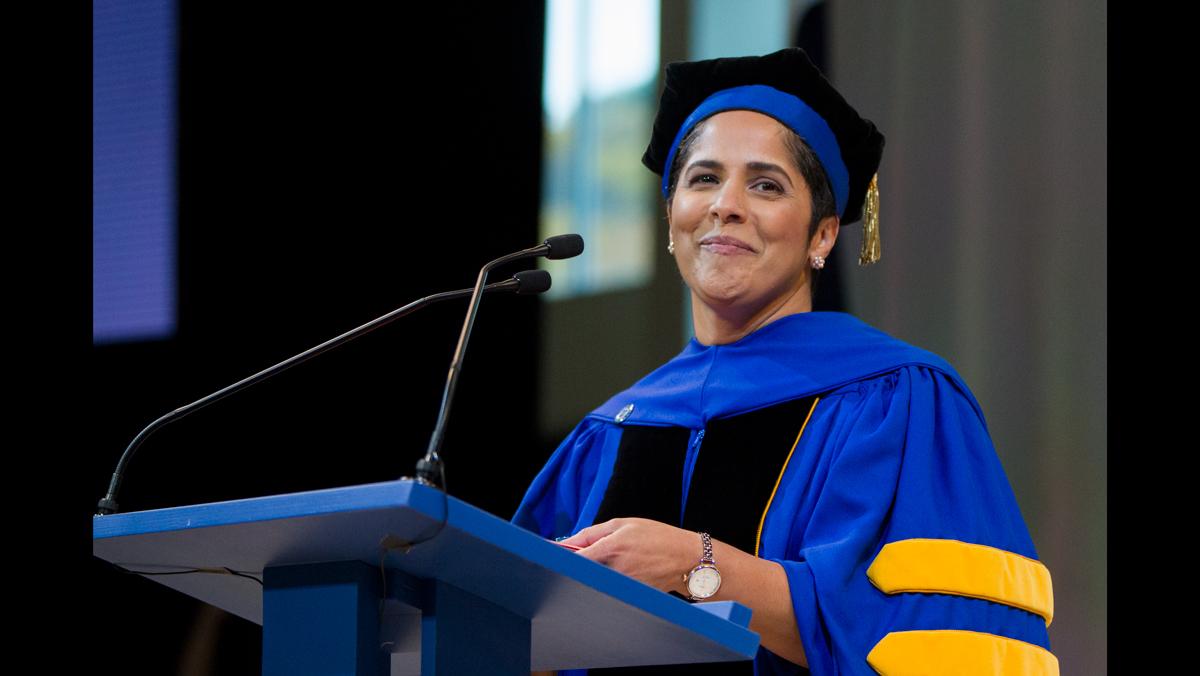 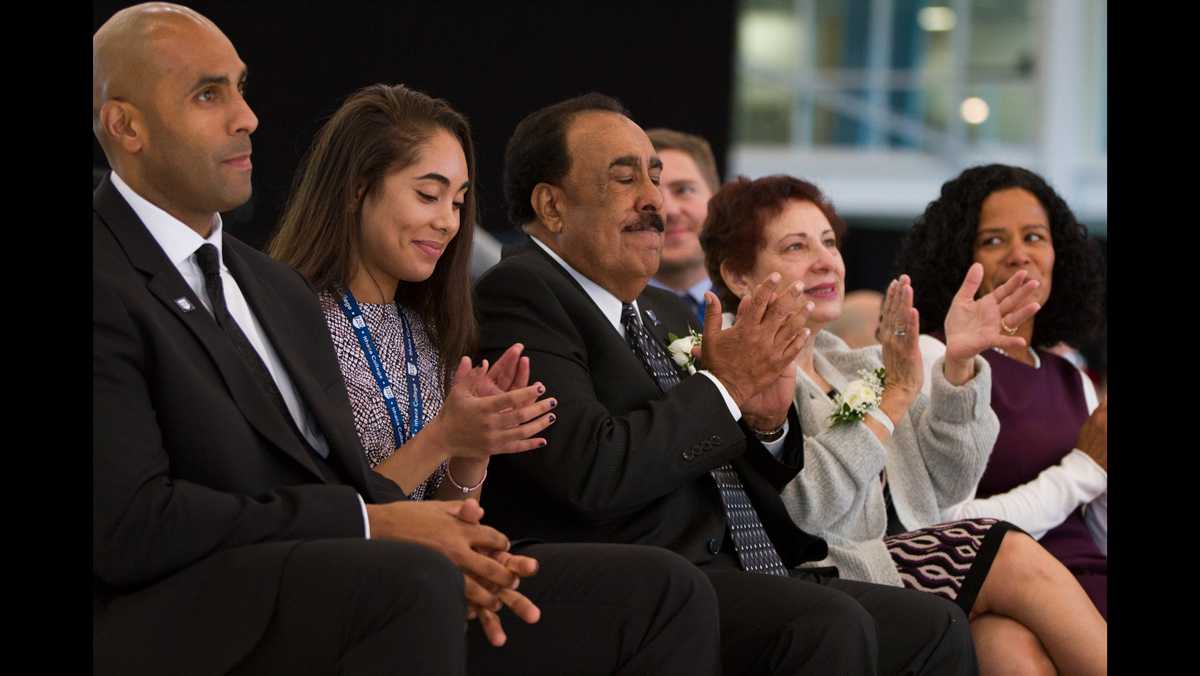 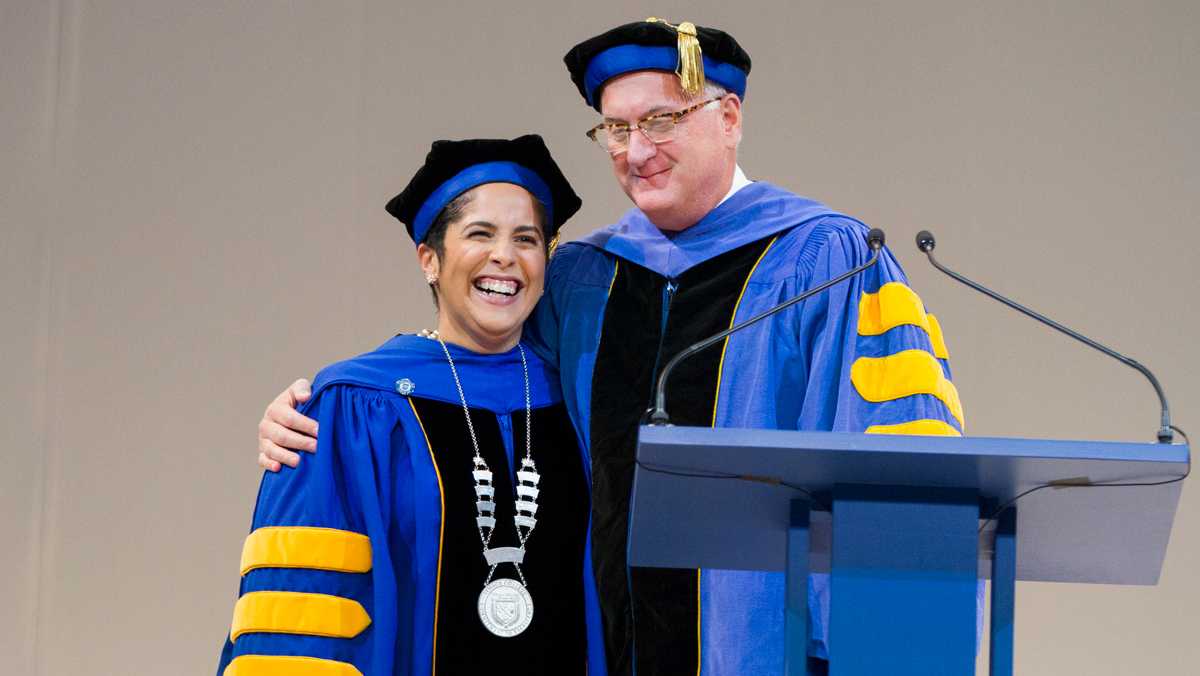 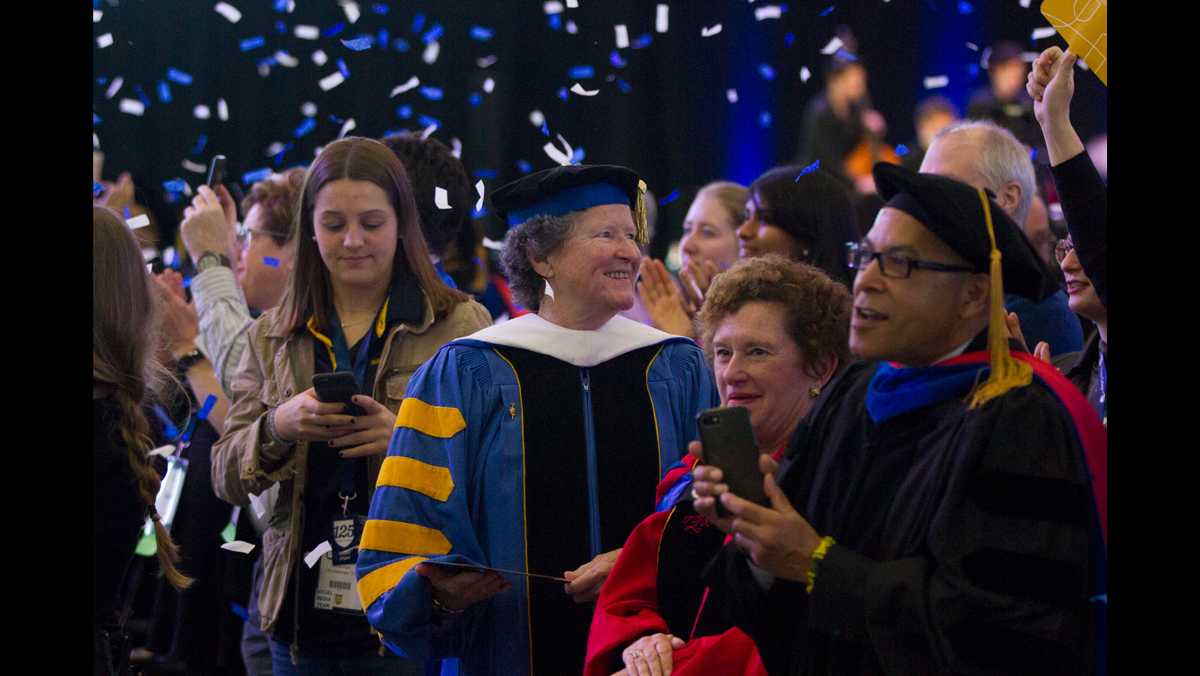 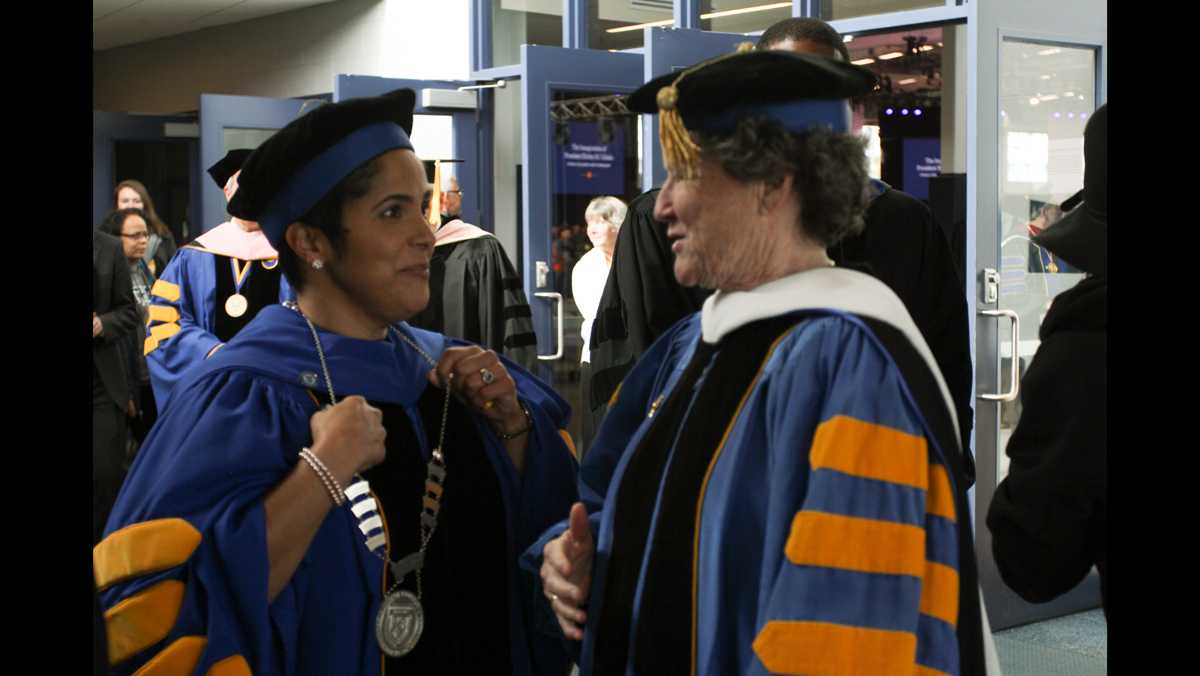 Christy Agnese ’06 said that she thinks Collado is the correct woman to lead the college at this point, and that Agnese is also excited for the start of her tenure.

“She is caring, talented and believes in collaboration and empowering people to do the right thing and to step up,” Agnese said. “It’s a great time to be a member of the Alumni Association.”

Junior Anna Gardner, Student Governance Council vice president of campus affairs, said she is excited to be a student at the college during this time.

“Being here today, I’m so happy to feel the energy in the room and just knowing that we’re entering a great time with the college,” Gardner said.

Sophomore Evan Jones, a member of the student greeter group at the inauguration, said he hopes Collado can bring the campus community together.

“I really think she’s done a great job so far really invigorating the campus community and getting everyone really hyped up for her inauguration,” Jones said. “Now that she’s official, we’ll see what happens in the years to come. But I’m really excited.”

Echoing the hopes of the faculty, staff and students, Collado ended her inauguration address with a call to action for the campus community.

“Let’s be daring, let’s be confident, and let’s step arm-and-arm boldly into the future,” Collado said.