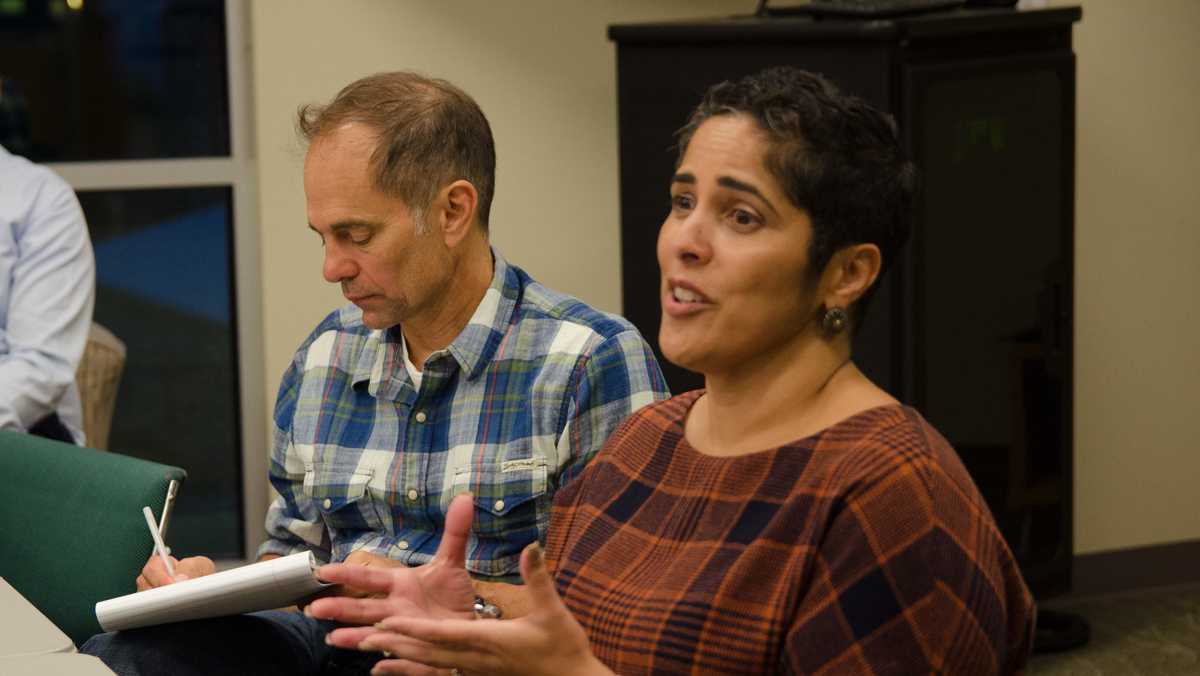 KRISTEN HARRISON/ THE ITHACAN
President Shirley M. Collado spoke to Tom Swensen, chair of Faculty Council and professor and chair in the Department of Exercise and Sport Sciences, and the rest of Faculty Council at the first meeting of the academic year. She asked for input on how to innovate the current role of the provost.
By Sierra Guardiola — Assistant News Editor
Published: September 6, 2017

Ithaca College President Shirley M. Collado visited the Faculty Council on Sept. 5 to ask for its input on how to move forward when restructuring Student Affairs and Academic Affairs, one of her central goals moving ahead.

Collado said she has been working to re-evaluate the current provost portfolio to maximize the effectiveness of the position. She said she feels the current portfolio has been hard to oversee and that it needs to be innovated. She added she is looking to hear from faculty, staff and students about what they believe should be the duty of the provost.

Tom Swensen, chair of the Faculty Council and professor and chair in the Department of Exercise and Sport Sciences, said Collado’s decision to seek input from the council is a positive development for the college. Collado asked faculty to give input before she formulates a proposal, which shows she is trying to work together with the faculty, Swensen said.

“I think over the last eight years, one of the shortcomings of the Rochon administration was the inability to engage the faculty and the leadership of this college,” he said.

Sarah Grunberg, lecturer in the Department of Sociology, and Derek Adams, assistant professor in the Department of English, also addressed the council regarding their integration of meaningful conversation among different groups regarding controversial issues, known as intergroup dialogue. Grunberg and Adams cofacilitated a course in Spring 2017 that focused on intergroup dialogue around race and ethnicity. The course gave students the opportunity to delve into deep, meaningful discussions about controversial, challenging or divisive issues, which many students said they had not experienced discussed before, Adams said.

“We think we can shift the culture on campus in a positive way if just one person in each department incorporates this,” Grunberg said.

To expand these discussions, Grunberg laid out long–term goals to the council. These goals included the creation of a center for intergroup dialogue as well as a potential minor in intergroup relations. Adams laid out his short–term goals, including expanding course offerings and training other faculty to be able to facilitate these discussions.

Collado said she supported the intergroup dialogue brought forth by Grunberg and Adams. She said it is important to create open spaces for faculty to speak about what has happened on the campus in the past few years and what is happening nationally.

During the new–business session, a motion was passed to issue a statement from the Faculty Council affirming the values that the college upholds as outlined by Collado in her statement regarding the announcement of the end of the Deferred Action for Childhood Arrivals program. President Donald Trump announced Sept. 6 that he planned on ending the program. DACA permits children and teens who were brought to the United States before mid-2007 to apply for the program, which grants work permits and protection from deportation.

The council also presented Collado with a framed welcome letter at the start of the meeting to show its support and excitement to begin working together.