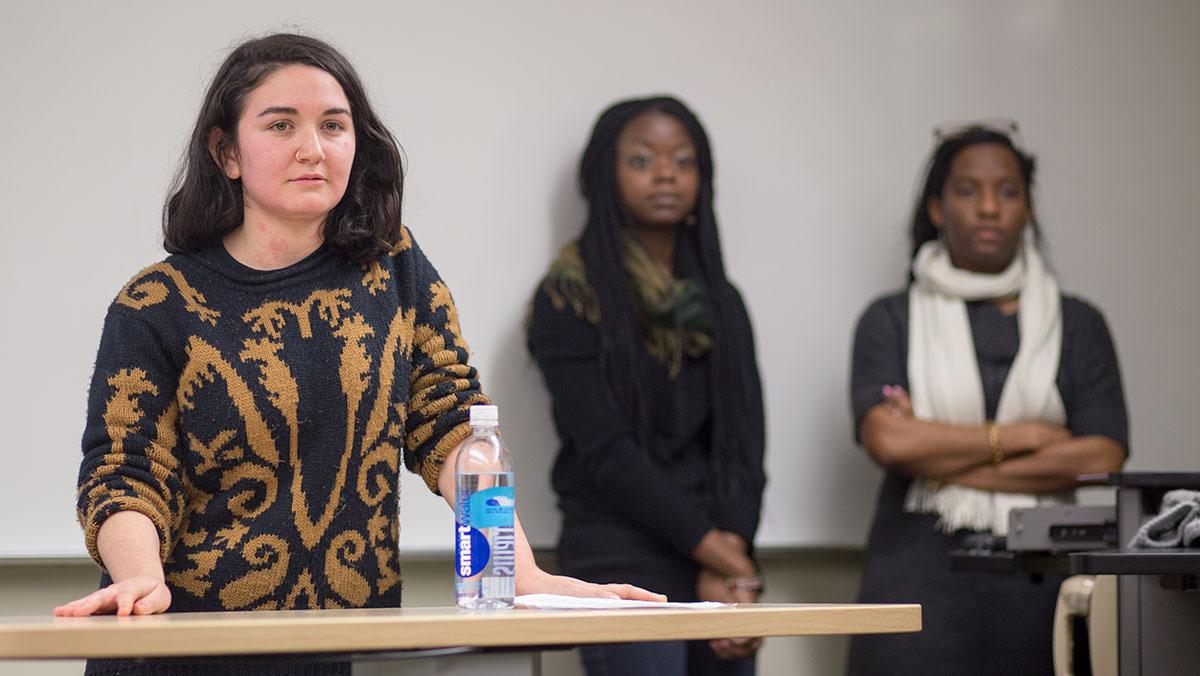 Mainstream news outlets are a driving force in society, as the images and language they use can set a tone in the mindset of their viewers. In the Collective’s latest discussion in the Assata Shakur Series, students and faculty at Ithaca College came together to observe the tokenizing of black people and other minorities in mainstream media.

The event began with a segment from Fox News on the protests in Ferguson, Missouri, after the death of black teen Michael Brown in August 2014 and the subsequent non-indictment of his killer, a white police officer. The group discussed the lack of information within the segment, which focused heavily on looters and graffiti tags. Junior Lisa Dupree took issue with the footage, saying the graffiti could have been old — the exact words were “snitches get stitches,” not anything specifically referencing the Brown incident — and Fox never went into detail about the looting it was showing.

“There’s no context to a lot of these images,” Dupree said. “Especially when they’re showing the black people breaking into the store. Can I get some more information around that, like what store was it? Who owns it? Which neighborhood is it in? It’s like, ‘No, no, no, no. These black people are violating their own neighborhood.’ That was the feeling I got.”

The next example involved the 2009 gang rape of a 15-year-old girl at Richmond High School in Richmond, California, and a critique of an article in the San Francisco Chronicle about the incident, titled “Richmond gang rape seen as nearly inevitable.” The article used phrases and ideas that didn’t sit well with members of the group, such as “The 15-year-old victim was a vulnerable girl who attended church and wanted to be a police scout but also worried counselors by trying too hard to please the school’s bad boys.”

“We see here that the victim is described as this good-girl-gone-bad situation,” senior Maya Cueva said. “This is taking away her agency. … I felt that there wasn’t any sympathy or empathy for her, it was just that she was part of this puzzle, this gang-glorified puzzle that they described.”

Senior Shy Pakizegi said the language, like stereotyping the area as a street culture that bred thugs and promoted disrespect toward women, was also detrimental to the young men of that area and across the U.S. As of 2010,the Hispanic or Latino community made up the majority of Richmond’s population at 39.5 percent, according to the city’s latest census.

“The author makes it too easy to generalize between this situation in Richmond and any other city with street culture,” Pakizegi said. “When you make these people seem like the norm, then it’s very easy to generalize and say, ‘All people of this background are that same way.’”

Senior Crystal Kayiza, president of the Student Government Association, then transitioned the discussion to images of specific black men in media. Kayiza showed a picture of Seattle Seahawks’ Richard Sherman, who Kayiza said pops up in the news for being combative toward interviewers. Kayiza said mainstream media has used this to make Sherman appear rude or disrespectful, instead of focusing on what Sherman has done in his community, like promoting a movement called Students With a Goal. The group also discussed Bill Cosby. Kayiza criticized the media for not giving narratives to the victims of the recent sexual assault allegations around Cosby, instead focusing solely on the man.

It was then brought up that the media rarely focuses on women of color in general. One example Kayiza gave was that the #BlackLivesMatter movement was started by Patrisse Cullors, Opal Tometi and Alicia Garza, three rarely mentioned black women. Pakizegi said he usually only sees black women portrayed as the nameless grieving mother.

“I think that’s really important: Women can’t be seen unless they are seen grieving. They can’t be powerful,” Pakizegi said. “That’s purposely not shown to give the idea that women don’t have a place [in protests and movements] and that it does have to be male dominated.”

“It’s just feeding off of that systematic idea that women of color and queer women of color can’t be leaders of social movements, that they can only be supporters,” Jacobson said.

The discussion then turned to brainstorming ways to better the situation. Some of the solutions included getting students to join other educational communities on campus, like taking courses in the Center for the Study of Culture, Race and Ethnicity; questioning the media more often; and changing the conversations and dynamics in the classrooms.