Ithaca College is in the process of finding out just how sustainable the Athletics and Events Center is, culminating years of planning and construction. 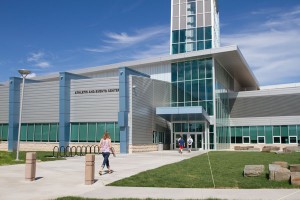 The A&E Center will gain silver or gold sustainability certification next year, falling short of the Leadership in Energy and Environmental Design’s maximum platinum certification, which is held by two other buildings on campus: the Peggy Ryan Williams Center and the Dorothy D. and Roy H. Park Center for Business and Sustainable Enterprise.

Moody Nolan, the architectural firm behind the A&E Center, has completed 14 LEED-certified projects, according to Howard Blaisdell, a senior associate at the firm.

Blaisdell said silver certification is an impressive achievement because of the A&E Center’s size and purpose.

LEED certification is the country’s top distinction for green building design, construction and operations. There are four levels to the LEED program that a building can achieve: basic certification, silver, gold or platinum.

Certification is based on a points system — out of 100 possible points — and a new construction or major renovation needs to achieve at least 40 in order to be LEED certified.

The A&E Center and its surrounding property is extensive, covering nearly 15 acres, according to Rick Couture, associate vice president of facilities.

These large spaces are hindering the college from receiving the highest LEED certification of platinum, according to Couture.

The A&E Center is unlike the Peggy Ryan Williams Center, which is made up of smaller offices, Couture said, each with its own opportunity for sustainability features like motion sensors, trash and recycling stations, specialty windows and other features.

The LEED certification point system is dependent on these spaces.

Couture said until the building has been open for a full heating season and a full cooling cycle, energy costs will be unknown.

In preparation for the A&E Center’s energy usage and other costs, the college increased its annual budget, Couture said.

“The college added a million to its overall operating budget to run the A&E Center,” Couture said. “That includes natural gas, electricity, staffing to run the building, all the cleaning supplies, all the maintenance supplies, setting aside money to do repair work.”

He said up to half of that budget could be used for natural gas and electricity.

Mark Darling, sustainability programs coordinator for the college, said his concern for building energy use is how people use it.

“There’s automatic systems but people still need to be conscious of what they do,” Darling said.

The LEED checklist created by Moody Nolan estimates a maximum of 69 possible points that the center could attain. That would achieve gold certification for the building.

The center’s achievement is undetermined until final certification paperwork is submitted next year.

Perhaps the most recognizable aspect of the A&E Center’s architecture, a tall glass tower that is lit up at night, is also one of its most sustainable features and cost reducers because it uses natural air flow rather than forced air with uses energy.

The tower’s contribution is significant, but it alone cannot fulfill airflow and circulation requirements, according to Moody Nolan’s checklist.

Darling suggested that the only way to achieve a higher rating would be to invest more money in the project. The pool is a significant hindrance to a higher building sustainability rating, he said.

Project design manager Troy Sherrard said the tower above the pool and the center’s entrance is more than utilitarian in its design — it is a symbol of the entire project’s green design.

“The natural ventilation of the tower allows us to reduce our energy consumption significantly, so that was probably the largest sustainability gesture,” Sherrard said.