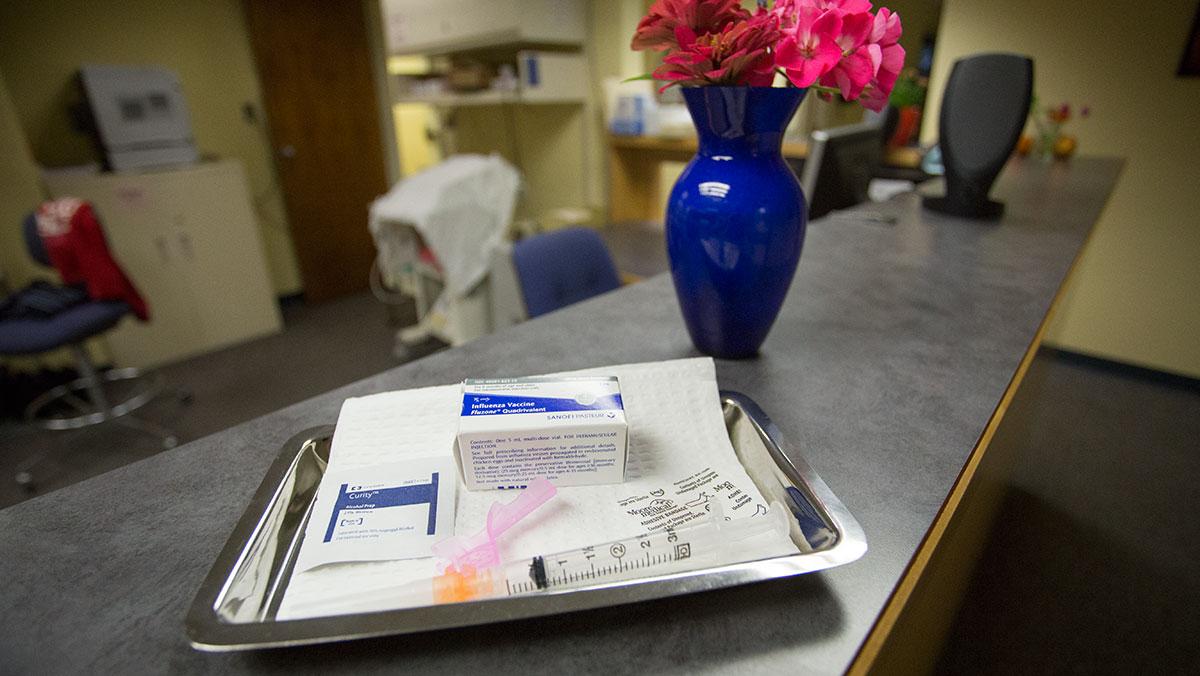 Tucker Mitchell/The Ithacan
The Hammond Health Center has begun receiving flu vaccinations, pictured above, for the flu season, which peaks between December and March. Last year, the number of students diagnosed with flu-like illness peaked at 238.
By Evan Popp — Staff Writer
Published: October 1, 2014

In preparation for the upcoming influenza season, the Hammond Health Center at Ithaca College is putting together a campaign to get as many students vaccinated as possible, Dr. Vivian Lorenzo, director of medical services at the college’s Health Center, said.

The flu vaccine is offered to students for free, Lorenzo said. The center will be offering and recommending flu vaccines to every student who visits the Health Center, although she said they are especially recommending the vaccine for students with any underlying risk factors like asthma, diabetes or heart disease.

This year, Lorenzo said, the college will be partnering with the Tompkins County Health Department to do a mass vaccination of faculty and staff at the college from 7 a.m. to noon Oct. 30 at the Fitness Center. She said the event is meant to protect against the spread of flu, but it is also supposed to serve as a practice run for if there needed to be an emergency mass vaccination.

While flu outbreaks can happen as early as October, most of the time flu season peaks between December and March, according to the Centers for Disease Control and Prevention. Data gathered by the CDC over the last 32 years shows that February is when flu season is most often at its apex.

According to the CDC approximately 5–20 percent of U.S. residents get the flu each year, with children, seniors, pregnant women and those with certain health conditions, such as asthma or heart disease, being the most vulnerable to complications from the flu. According to the CDC, it’s not possible to predict the severity of the upcoming flu season because of the variables involved in the spread of flu.

Lorenzo said flu season at the college is a presence every year, but not an overwhelming one.

“Every year we have flu cases,” she said. “Some years we have much higher numbers of cases than others. I have been here 16 years, and in that time, we have never had a level of illness where we had to take any more drastic measures like cancelling classes.”

Last year, however, the health center had an influx of flu cases due to the H1N1 strain of flu, which spread rapidly. Last winter The Ithacan reported the Health Center treated more than 91 students or staff members with flu-like symptoms over the span of a week in late January and early February. Lorenzo said due to last year’s outbreak, the college pre-booked 1,300 doses of flu vaccine this year — 300 more doses than it pre-booked last year.

At Cornell University, Sharon J. Dittman, associate director for community relations at Gannett Health Services, said the number of students at Cornell who have been infected with the flu has fluctuated in recent years. During the 2011–12 academic year, 363 students were diagnosed with flu-like illness. That number increased to 625 during the 2012–13 year before dropping to 395 last year, Dittman said.

Cornell is already dealing with some cases of flu, Dittman said. She said there have been cases of upper-respiratory infections recently and that fewer than five people have been confirmed as having the flu.

Dittman said there isn’t enough evidence right now to determine if these cases are outliers or if they’re the start of an early flu season. However, she said Cornell does have plans in place if there is an early surge of cases.

“We prepare for an outbreak every year,” Dittman said. “The key elements of preparation include making it as easy as possible for members of the community to get vaccinated — we hold about 40 clinics at various locations on campus, and offer individual appointments here at Gannett — and reminding everyone of the importance of good hygiene.”
Dittman said Cornell has yet to receive its campus supply of flu vaccine. She said Cornell has started vaccinating its healthcare workers, but the first delivery of the campus supply of vaccine is expected to arrive in early October.

“We’re really at the mercy of vaccine companies and their delivery system,” Dittman said, noting that Cornell ordered the vaccine well in advance.

Dittman said each year Gannett Health Services tries to get as many people as possible vaccinated against the flu. Dittman said Gannett provides vaccines to an average of 10,000 people each year and that last year, 4,000 students received vaccinations at Gannett.
“The equation is straightforward: The more people that get vaccinated, the fewer will get sick,” Dittman said.

Aaron Sayegh, assistant professor in the Department of Epidemiology and Biostatistics at Indiana University Bloomington School of Public Health, said vaccines are one of the most effective ways to preventing outbreaks during flu season. However, he said there are misconceptions about flu vaccines leading to incubation.

“One of the things that you most often hear is ‘I caught the flu from the vaccine,’ and typically what happened is they contracted it before they got the vaccine,” Sayegh said.