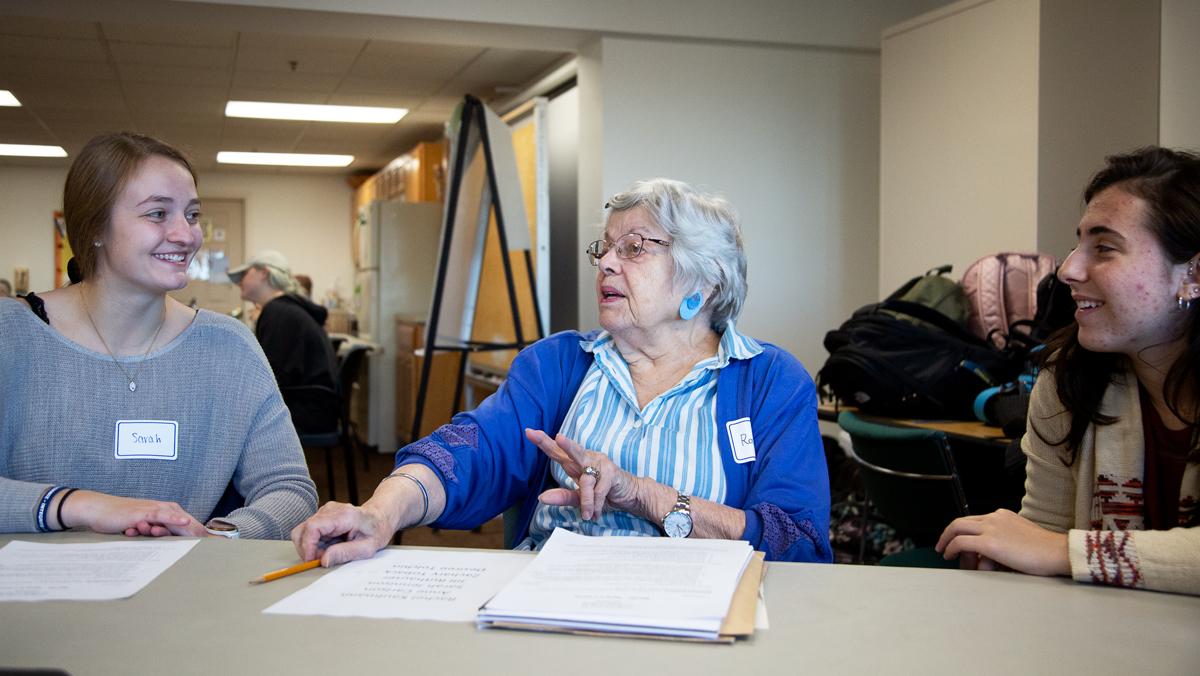 Like his fellow classmates, Ithaca College student Allen Minsky attends classes and lectures during the week that cover gerontology, film, philosophy and more. Unlike his peers, Minsky is 77 years old.

In 2019, Ithaca College celebrated its 20–year partnership with Longview, a senior living community located across the street from campus. The program allows Longview residents to take classes at the college and allows students to engage in hands-on learning at Longview. All five schools at the college are involved with the program.

Minsky said he feels very fortunate to take classes at the college.

“Having the partnership with Ithaca College as part of living here at Longview has been a very positive piece to me wanting to be here,” he said. “I certainly don’t think that a lot of places are either willing to do it or able to do it. … I enjoy being able to have these experiences.”

Longview initially began as the Ithacare Center in 1974, an assisted living home located in a renovated off-campus Ithaca College dorm. In 1997, Longview was built after the college donated 28 acres of land across from campus. Residents began to move into the new facility at the end of 1998, and the partnership started in 1999.

Collaborations between colleges and assisted living homes are a growing trend in higher education. It is estimated that hundreds of colleges have engaged in similar partnerships and only expect the number to grow. In the Netherlands, some students are even living in nursing homes as a more affordable housing option.

Minsky is one of seven Longview residents taking classes at the college this semester, said Jessica Valdez Taves, IC/Longview coordinator and assistant professor in the Department of Gerontology. Over the last two decades, the number of Longview residents who take part in the program has ranged annually from one to 15 people.

Minsky said Longview residents are allowed to take two free classes a semester, although the number of available classes can be limited depending on what times the classes meet.

Valdez Taves said the goal of the program is to foster community and learning between generations.

“Students start to lose the stigma about older adults and older adult facilities and start to get comfortable, and once they’re comfortable, they can learn from and educate each other,” she said.

Valdez Taves said that simply talking with a Longview resident is impactful for students.

She said that in some cases, Longview residents have personal experiences in the course topics and are able to share first-hand knowledge.

“It resonates with the students,“ Taves said. “When you get to talk with somebody … or when you get to learn their perspectives versus from a textbook, it’s amazing how much more personable and how much easier it is to really understand it for students.”

“I enjoy hearing how people who are so much younger than I am feel about things,” he said. “I find that people are listening to me and at least hearing what I’m saying, … and I like listening to them because they are the future.”

Elizabeth Bergman, associate professor and chair of the Department of Aging Studies and Gerontology, said the partnership also helps break down stereotypes between generations, particularly when students go to Longview.

“As faculty who educate young people, our motivation with bringing students to Longview is to really breakdown some of the stereotypes and stigmas around aging,” she said. “But what I find, in the end, is that it works in the other direction just as much. … Residents and tenants at Longview will come to me and say ‘Thank you for including me, you’ve totally restored my faith in young people.’”

Minsky said that though he enjoys his classes, he wished more Longview residents took classes at the college. Members of the campus community have raised concerns about the lack of accessibility on campus due to its natural terrain of being built on a hill and the unavoidable snow.

“The only thing I’m sorry about is the fact that more people don’t participate in this,” he said.

“Many people feel that physically, it is very difficult for them to maneuver around the college.”

Taves said that in the future, she hopes to improve the program to better accommodate more Longview residents.

“I would love for more folks from Longview to come up here to be able to share and see the culture of this campus, but it’s just as important to me for students to go down there and understand the culture of an adult residential setting,” she said.

Ithaca College students as well as members of Longview assisted living community show off their wide variety of talents.