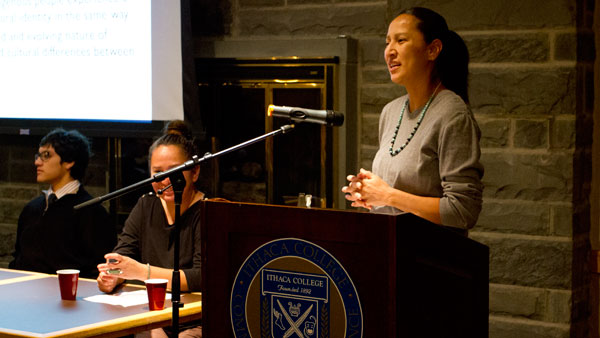 The celebration kicked off Nov. 6 with a showing of the 2013 historical film “Bury My Heart with Tonawanda,” which tells the story of boy with Down syndrome who is rejected by his own family but accepted by the Tonawanda Seneca Nation.

The celebrations continued Nov. 12 with a Native identity panel that featured sisters Hollie Kulago, former professor at the college, and Ettie Anderson.

Brooke Hansen, associate professor and chair of the anthropology department, organized the Native American Month celebrations. She said the panel is held annually to facilitate important discussions about native identity.

“Students at Ithaca College talk about their Native ancestry and their Native identity and all the complexities that are involved with it,” Hansen said.

As part of this month’s celebrations, the Cayuga Strengthening Haudenosaunee-American Relations through Education farm, commonly called Cayuga SHARE farm, welcomed student volunteers to prepare the farm for the winter. This organic farm is home to apple trees, herb gardens and more. It originally belonged to the Cayuga people before they were driven out by the U.S. government in the 1700s.

About 20 years ago, Hansen and Jack Rossen, professor in the anthropology department, organized a fundraising team. The team raised money to buy the land, which was later handed over to the Cayuga nation.

Student volunteers at the farm collected fallen branches off the property for a bonfire and fenced off small trees to protect them from animals over the winter.

Senior Marcy Weber, who volunteered at the SHARE farm Nov. 10, said Dan Hill of the Cayuga Heron Clan and Donna Silversmith of Cayuga Snipe Clan, who are both caretakers of the land, had been grateful to the students for their work.

“It was very important that everyone there volunteering … heard directly from Dan and Donna why what we were doing at the SHARE farm was important,” Weber said. “Their stories were poignant and moving.”

Hansen said Native American Month aims to use education and outreach to lead to community activism.

“[We] educate our students so they know who Native people are … so reach out to our Native neighbours and engage activism in order to change the culture that is here now,” she said.

Also a part of the celebrations is a Native identities in hip-hop showcase, featuring Native American performers Bboy Remind, Artson and Pandora. This event will focus on Native Americans’ representation and influence in hip-hop music and will be held at 6 p.m. Nov. 15 in Emerson Suites.

Rossen, who is also the co-founder of the Native American Studies minor, said students in the IC Natives Club decided on the performers. The student organization seeks to promote traditional Native American customs and culture on campus.

“This is them deciding what they want for the month, and I thought this is terrific,” he said.

“We always like to have something for Native Month that represents contemporary Native people,” she said. “By doing this, we show that Native Americans are not just in the past; they are still here.”

In keeping with the theme of contemporary Native Americans, the college will also be screening the film “Crooked Arrows” on Nov. 19. The 2012 film follows the story of a Native American lacrosse team. The game of lacrosse originates from Native American heritage.

Alf Jacques, one of the last remaining traditional stickmakers in the world, will also attend the screening of the film, after which he will give a presentation about his work.

All events that are part of Native American Month celebrations are open to the public. Students interested in getting involved should contact Hansen at kbhansen@ithaca.edu or Rossen at jrossen@ithaca.edu.