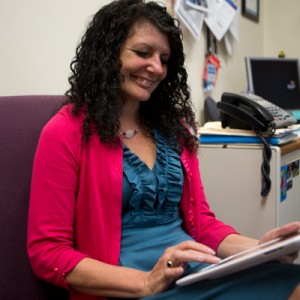 A different kind of apple is appearing on more and more teachers’ desks.Educators around the country at almost all academic levels are leaning toward utilizing Apple devices, like iPads, as predominant tools for learning and instruction.Following the Apple trend, Ithaca College has implemented a pilot program in which 40 iPads will be distributed to select faculty members — 20 in the fall and 20 in the spring — to help aid classroom instruction and collaboration.The program, which was developed through a collaborative effort by Information Technology Services and the Center for Faculty Excellence, was launched this semester. The goal is to “explore the use of tablet computing for their teaching, research and personal productivity,” as stated on the pilot program website. The pilot also aims to create a faculty iPad “community” through Sakai for instructional collaboration. Twenty professors across all five academic schools received their temporary iPads two weeks ago to use during the fall semester.Beth Rugg, assistant director of technology and instructional support services, said she believes the program will help the college gauge how it can better use portable devices to foster more in-depth instruction and learning.

“Through this, I think we’ll gain a better institutional knowledge on how these devices can be implemented in the classroom, and as we work alongside the faculty with the technology, we’re hoping we can enable them to explore their discipline in a very specific way,” she said.

One of the program’s goals is for faculty to find concrete apps that could be targeted toward different subject areas. Rugg said these apps would help facilitate more focused learning.

David Gondek, assistant professor of biology, was one of the faculty applicants to receive an iPad. Gondek said he plans to use a lab management app developed by labguru.com as a research and teaching tool to help manage student projects and labs. He also said he is looking into an app called Molecules, which allows users to study biology at the molecular scale through 3-D molecules based on touch interaction.

“One of the things we have an issue with is that, if we wanted to draw a structure that’s not flat in reality, we’d have to draw these ‘chair structures’ to demonstrate three dimensional structures on a two dimensional environment,” he said. “But with the iPad, we can display them on a 3-D scale.”

Like Gondek, Rebecca Jemian, associate professor of music theory, history and composition, was chosen to get a trial iPad. She said she would use the device during class as an alternative visual aid.

“I’m going to use it to display musical scores in my classes and mark on them,” she said. “I can do that in other ways, like with doc cameras, but there’s a flexibility that the iPad can give me. So I look forward to seeing that.”

For example, incoming students in the Roy H. Park School of Communications are highly encouraged to purchase a MacBook Pro laptop, while the School of Business recommends that students purchase a Dell laptop for their studies. Rugg said she credits this trend to the varied technological use across the job market, because it depends on which disciplines are using which products.

Many professors at the college are also utilizing other Apple programs to aid instruction. For some classes, lectures and other content are available through the college’s iTunes U page, which features audio and video material. iTunes U has been rapidly gaining users in higher education as a form of alternative learning since its launch in 2007. More than 800 educational institutions currently have iTunes U pages. Each academic school at the college has its own iTunes U page, where students can access educational material for their majors.

At Seton Hill University, an experiment was conducted in 2010 involving campus-wide iPad and MacBook implementation. A few days after the release of the first iPad, all 2,400 full-time students at the university, as well as the entire faculty, were given iPads and MacBooks. In an interview with Inside Higher Ed, the university’s provost, Mary Ann Gawelek, said students used the iPads for preliminary research work, while doing the majority of their “production” — writing papers and putting together presentations — on their MacBooks. Gawelek said the iPad and MacBook program was implemented mainly to streamline the way students use digital textbooks and help foster integrated learning through technology.

Using tablets for educational purposes, however, is not without its flaws. For one thing, implementing cross-school iPad use is not cheap. Rugg said though ITS was able to secure one-time funding from the college for the iPad program, the cost amounts to around $10,000 for 20 tablets. An individual iPad starts at $499, and many educational institutions attempting to utilize the device have had to rework their yearly budgets to accommodate purchasing costs.

Some teachers still prefer to instruct without any technological aids. A 2009 study by the National Center for Education Statistics found that though 99 percent of public school educators have access to computers, only 29 percent “often” use them during class lectures.

Junior John Vogan, a first-generation iPad owner, said one of the tablet’s flaws — the inability to have more than one window open at one time — can actually be a benefit.

“It’s nice because with the traditional laptop, you’re kind of closed off from discussion, and it can be distracting because you can have so many things open at once,” he said. “At least with an iPad, you’re just taking notes and it’s less of a barrier having a dialogue between students and professors.”

Though he said he appreciates the portability and entertainment the iPad provides, Vogan said he will probably continue to use his MacBook Pro for educational purposes.

“The iPad is really nice to have; it’s an incredible device,” he said. “But I think as far as ease of use, it’s still much simpler to use the MacBook for typing purposes. That’s the one drawback of the iPad; the keyboard is a little tougher to use, not as seamless.”

At this point, Rugg said, the college does not have any plans past the pilot to further implement iPad use in the classroom. She said her greatest hope is that the program will provide a template of ideas that faculty can build upon to look into new areas of education.

“Maybe all we can do is learn,” she said. “We hope it will help break down some of the barriers that prevent people from further exploring different educational topics.”