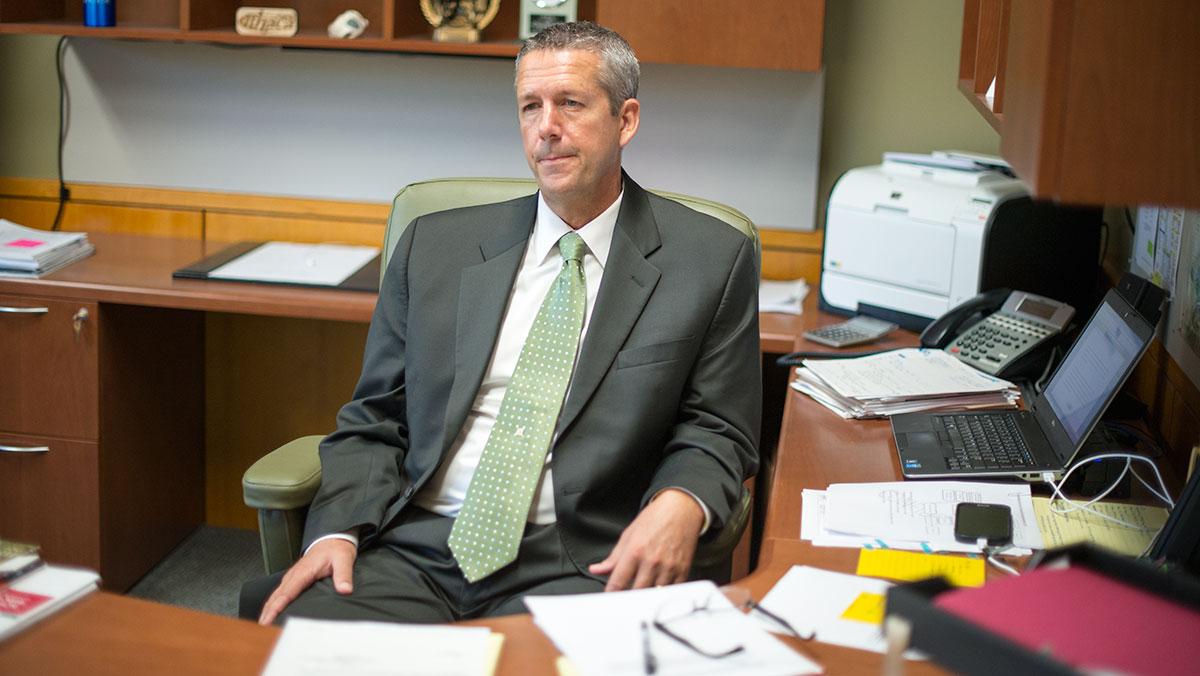 As part of a process that will help determine the look of the Ithaca College campus for the next 10 years, the college will hold town hall meetings on Oct. 7 for students, staff and faculty to contribute input to the campus master plan.

Gerald Hector, vice president for finance and administration, said the master plan will contain the elements of buildings and landscaping, among other facilities and academic needs, that will need to be improved or renewed in the long-term future. Though the master planning committee has been researching campus conditions and aspects of the academic community since last spring, he said it is now looking to the final link in the process before moving into the next phase.

“For master planning to be successful, it needs to take advantage of its faculty, staff and students,” Hector said.

Tim Carey, associate vice president in the Office of Facilities, said these meetings will wrap up the condition assessment and needs assessment phases of the process and lead into the concepts phase. He said a final plan should be ready by the early part of 2015.

At the meetings, consultants from Perkins Eastman, an architectural planning company, will be present alongside the Master Planning Committee to collect campus feedback on areas of improvement, Hector said.

Carey said as an example of the kind of interactive activities the firm will offer, participants will be able to place green and red dots on a campus map on places that warrant praise or complaint, respectively.

In addition to the needs assessment conducted by Perkins Eastman, Carey said the college hired Sitelines, a construction firm based in St. Louis, to conduct the conditions assessment through thorough, data-based research of each building and its problem areas.

“We will merge those two pieces, and that will create a much more robust master plan,” he said.

Carey said the college’s strategic plan has helped inform the master plan in terms of academic programs, enrollment and the campus structure those programs need.

On a more functional level, he said they are looking for student input on issues such as parking, different entrances into campus and the walkways on which people traverse.

“It’s really driven by all the groups that we’re meeting with,” Carey said. “Each building of the college is being looked at.”

He said Sitelines will help the college schedule when to take care of certain maintenance issues like cracks in concrete or loose handrails, grouping projects into an agenda according to when they should be finished, which is called deferred maintenance.

“All those things we know need to be done, we can’t do it all at once because you just can’t afford to, so you make decisions and you defer some of the things to a later date,” he said.

As part of the effort to recruit student attendance at the meetings, Hector said the committee has reached out to the Student Government Association to discuss how to best engage the student body.

SGA President Crystal Kayiza said she and senior Aaron Lipford, vice president of campus affairs, sat in on meetings with the Master Planning Committee to provide feedback and criticism on their methods of student engagement and the plans for the town hall meetings.

“We would let ourselves be available as a resource to the committee, but also we’re hoping to operate as a conduit of information from the committee to the student body as a whole,” Kayiza said.

Some of these strategies for reaching students include reaching out to the Senior Class Committee to discuss how to best communicate the town hall meetings to students who live off campus. She said the SGA also reached out to student organization leaders to encourage their attendance at the Sept. 29 SGA meeting, where Josh Jackson, a Perkins Eastman consultant, and members of the college administration presented and answered questions on master planning.

Kayiza said the technical nature of the language of master planning does not sound attractive to students, so the SGA is shaping the campaign in terms of encouraging students to leave their legacy, which she said captures the idea of participating in master planning.

“Ten years down the road, you may not necessarily physically be here at IC, but the impact of this campus and the value of your degree is very much going to change because of the way the campus looks,” she said. “Making sure that you leave an impression now is going to ensure that the value of your degree and your experience maintains the same way after you leave the actual South Hill.”

Carey said the college had originally planned on completing this assessment phase last spring, but the committee did not feel it had collected enough feedback.

“We weren’t satisfied that we had heard from enough folks,” he said. “It was the end of the semester, so a lot of people were probably distracted with Commencement and final exams.”

In addition to attending the Sept. 29 SGA meeting, Carey said the committee will continue to meet with faculty this week prior to the town hall meeting.

“At the end of the process, we truly want people to feel like they’ve had a voice,” Carey said. “We are truly asking everyone for their feedback and their perceptions.”