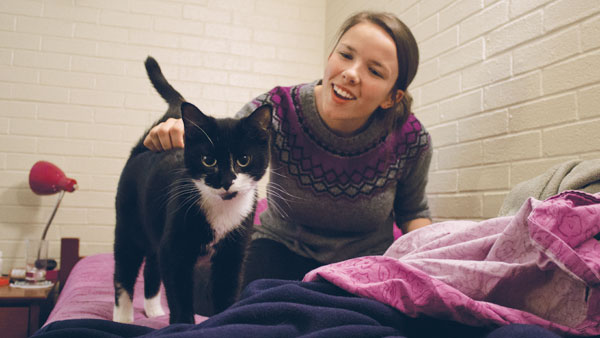 Junior Meredith Knowles sits on her bed in her Garden apartment, nestled against a heap of blankets and a sleeping cat. Books and clothes lay strewn across the room, mingling happily with cat toys and treats.

Knowles has been diagnosed with anxiety, and her roommate is a 1 ½-year-old black-and-white cat named Arya who was adopted from the Society for the Prevention of Cruelty to Animals of Tompkins County for therapeutic purposes.

After notes from three separate doctors and many emails, Knowles received approval from the Ithaca College Office of Residential Life for a therapy animal.

According to Harvard Health Publications of the Harvard Medical School, anxiety causes the heart and breathing rates to increase. Muscles tense up, and blood flow is diverted from the abdominal organs to the brain, triggering symptoms of fatigue and nausea.

Knowles said she experienced stomach problems before she adopted Arya last month. She said her cat helped her manage the pain and anxiety brought on by college stresses such as homework and pressure from her parents.

“Animals can pick up on your feelings,” she said. “They can sense your emotions. It’s having a physical being there that cares about you.”

“For any accommodation, a student must provide documentation that gives a specific medical diagnosis, the recommendation by the health professional and the compelling reason as to why this recommendation is being made,” Astorina said.

SDS uses the definition of “disabled” from the American Disabilities Act, which stipulates that the term “disability” means, with respect to an individual, a physical or mental impairment that substantially limits one or more major life activities of such an individual.

According to Residential Life guidelines, no animals except for Guiding Eye puppies and tropical fish are permitted in residence halls. Linda Koenig, assistant director for housing services and communications at Residential Life, said support-animal cases are dealt with on a case-by-case basis and are not governed by any set of rules or guidelines.

She said the final decision to grant a student a support animal is made by a committee comprising representatives of the Hammond Health Center, SDS, the Center for Counseling and Psychological Services, Residential Life and Judicial Affairs and Ithaca Dining Services.

Koenig said her role in the process is to make students understand what is expected of them if they choose to have an animal on campus. After being approved to have a support animal, Knowles received a set of guidelines, which include having animal vaccinations, using a method of restraint when the animal is outside the living space and ensuring no other residents are inconvenienced.

Knowles said she is happy to see the college considering alternative forms of therapy for students with conditions like her own. She said proving her disability to the college was challenging.

“Some people with disabilities … everybody looks at them, and their disability is so visible,” she said. “But if your disability isn’t visible, you have to prove it to them.”

Senior Jaymi Feeney is another student approved to have a cat for therapeutic reasons.

Feeney’s request for a service animal was in accordance with Student Disability Services’ policy that a student must provide documentation giving a specific medical diagnosis.

Feeney has epilepsy, a serious condition characterized by seizures affecting a variety of mental and physical functions, which she said is more easily managed with a support animal. She said her cat, Batman, has been very helpful with her condition.

In her three years with Batman, Feeney had no difficulty getting approval to keep him on campus. She said Batman is able to alert her 30–60 minutes before a seizure.

Science has not yet proven how cats and dogs can predict seizures, but cats have been known to foretell epileptic fits by pacing up and down or meowing loudly.

Feeney said the college granted her approval to have a cat after receiving a letter from her neurologist.

“I gave them one doctor’s note and they were like, ‘OK,’ because epilepsy is more of a severe thing,” Feeney said. “With epilepsy, that is a clear cut, ‘I have seizures’ that can be documented. That’s it. But with anxiety and other types of things like depression, that’s a little less concrete.”

Feeney said she acknowledges the benefits of therapy animals, but said there are drawbacks to having therapy cats on campus. She said students may pretend to have a condition to be approved to have an animal. She also said students have asked her how to get a cat, citing their own issues with depression and anxiety.

Feeney said students like Knowles may be “opening Pandora’s box,” paving the way for people without serious or any disorders to acquire and misuse therapy animals.

Koenig said she does not share Feeney’s concern because each student’s situation is reviewed on an individual basis.

Knowles said her persistence and the college’s open attitude toward alternative therapies will help her time as a college student be made easier.

“It’s definitely something I believe very strongly in — recognizing how tough of a time college is for people, and some people get through it easier than others,” she said.