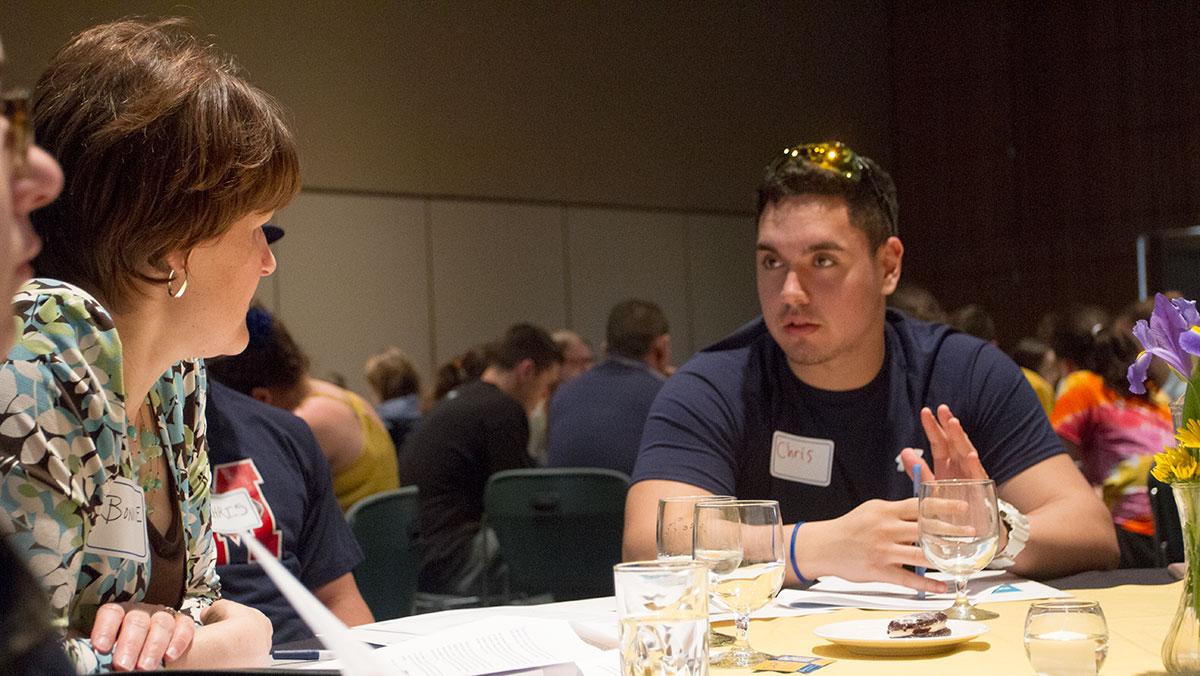 Clara O'Connor/ The Ithacan
Bonnie Prunty, director of residential life and judicial affairs, talks with sophomore Chris Reyes in their discussion group at the college's "What Do We Choose to Ignore" event April 13.
By Maura Aleardi — Staff Writer
Published: April 15, 2015

Over 100 Ithaca College community members sat in Emerson Suites on April 13 and took the online pledge to keep women and men safe from sexual assault at the “What Do We Choose to Ignore?” event.

Hillel is a Jewish faith organization and part of the Foundation for Jewish Campus Life. “Ask Big Questions” was created Fall 2014 as a nondenominational fellowship program at the college, Igor Khokhlov, executive director of Hillel at Ithaca College, said. It was created to spark small conversations about topics such as sexual assault, he said.

Each participant was given a packet to guide the conversation, which began with establishing discussion rules such as how to respond to someone who made a hurtful comment. The participants introduced themselves, providing an example of when they chose to notice something they may have otherwise ignored.

The discussion focused on an excerpt from Patton Oswalt’s “A Closed Letter to Myself About Thievery, Heckling and Rape Jokes,” which analyzes the effects words have on others. After reading the piece, participants broke into smaller groups to discuss it. Then, they regrouped to offer ways to actively prevent sexual assault in their own everyday lives. Before leaving, the groups exchanged contact information in order to check in with each other later in the week.

The “What Do We Choose to Ignore?” event is just one of nine events to happen during the month of sexual assault awareness. About 115 students and faculty attended the event, Khokhlov said.

The event and entire month was planned in order to start a conversation among students and make them realize the power they have to make a difference, Khokhlov said.

“The goal is to raise awareness, start the conversation going, identify the fact that we can be change agents,” Khokhlov said. “You don’t have to wait for someone to come in. You can be the person who makes the change.”

Another reason for having events like this is to give students a chance to speak with their peers in a safe environment, Tiffani Ziemann, areas coordinator and Title IX coordinator, said. She said she is trying to be supportive of the students and allow them to handle sexual assault in a way they prefer.

Ziemann said certain environments, such as the one created at the event, make it easier for students to discuss sexual assault and not feel intimidated by policies. In this environment, faculty are not required to report a sexual assault account if they hear of one, Ziemann said. This allows the students to have more real discussions with each other instead of listening to an administrator talk, she said.

One student, freshman Jesse DeTesera, took advantage of this environment and was given feedback from many participants in his discussion group. During his group discussion, he made a comment saying it would be a good idea for women to avoid situations where sexual assault may occur.

After the fact, he said he was just suggesting it as a precaution for anybody, and that even he follows the advice by always bringing a friend along to a party. This statement was met with disagreement. While he does see why the statement is not the best way to think about sexual assault, he said he was pleased with the discussion it provoked.

These themes are directly reflective of the White House campaign, urging campus community members to be active in preventing sexual violence. A key proponent of this is preventing bystander behavior, around which Active Minds hosted a training panel April 15: “Bringing in the Bystander Training.”

Each event, while they can be considered singular events, is leading up to the final “Take Back the Night” event at 7 p.m. April 24 hosted by the Advocacy Center. “Take Back the Night” is a chance for the community to come together and support survivors and fight against sexual assault, according to the event’s website. Weil said the walk will begin at Textor Circle and end in DeWitt Park where a rally and vigil will take place. It will include members of Ithaca College, Cornell University and downtown Ithaca, she said.

Weil said the “What Do We Choose to Ignore?” event went well because of the diverse group of participants. Specifically, she said her discussion group was interesting to observe, and she enjoyed the way they interacted with one another.

“It was really motivating to see them call each other out,” Weil said. “People in the conversation, in a very respectful way, held each other accountable and were able to educate each other about some of the language that is ingrained in our society that is wrong.”

Khokhlov said he would eventually like to see events like this one become a permanent, annual tradition at the college.

“We should find a way of creating something like this with or without [“Ask Big Questions”] as a unified practice amongst students so there is an understanding that there is a certain level of culture within IC that we have to stand by,” Khokhlov said.