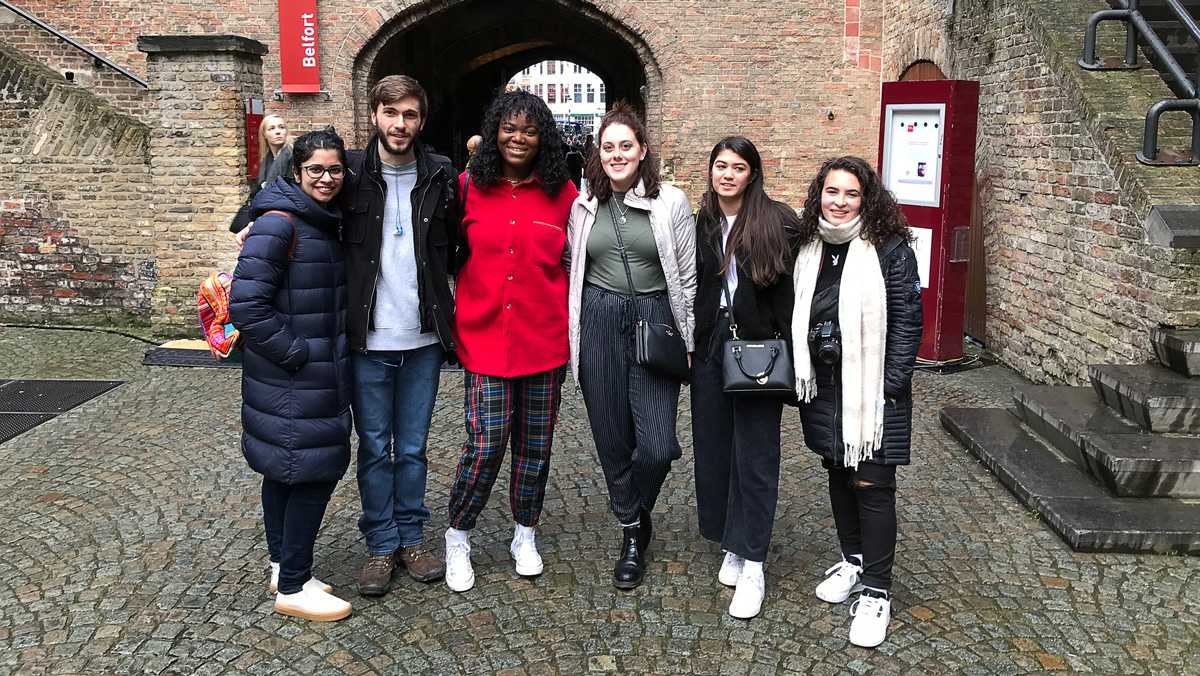 While most students spent their winter break relaxing at home, nine students from Ithaca College traveled to Brussels for a Model European Union (Model EU) conference. They wrote, debated and discussed as they simulated roles of the European Council.

Students were abroad from Jan. 7 to 13 and attended the conference from Jan. 9 to 11. Juan Arroyo, assistant professor in the Department of Politics, advises the program. Arroyo said via email that the conference is a simulation exercise and works to offer students the opportunity to experience how the European Council functions.

“Students take on a role and prepare to debate a topic with 27 representatives of other EU countries,” he said. “The goal is to reach a conclusion that all 28 EU members can agree on unanimously.”

Any student can join the program, Arroyo said. The conference is held annually, and its location switches between New York and Brussels every year. The college paid for the registration and hotel for the program, and students were required to pay for airfare to Belgium themselves or through financial aid resources, he said.

This year, Arroyo said, six of the students from the college represented Spain or Belgium and three worked on the press corps.

For the press corps, students worked to recap the conference by writing articles, taking pictures and asking the students in leadership roles questions at daily press conferences, Arroyo said.

“I’m a writing major and have two minors in history and politics but want to go into journalism when I graduate,” he said. “[The conference] was a good thing to put down as experience in that environment.”

Tolve said that seeing the ways his many interests came together during this conference was the highlight of his work for the press corps.

Arroyo said the program offers an extensive experience for students interested in politics and is valuable in offering a realistic way to partake in the world of international organizations.

Tolve said he and the other students arrived in Belgium three days before the conference. During these days, he said, they were able to explore the area.

Sophomore Julien Sobel said he valued his time exploring Brussels and taking part in the conference.

“Not only does the city lie at the historical intersection of Flemish and Walloon culture, the city hosts an international community with people coming everywhere ranging from Romania to Vietnam,” he said. “The diversity of the city only serves to represent the diversity found in Europe and the world.”

Tolve said he chose to join Model EU because it is not a big commitment, as there are no meetings or practices, and it requires no application process, unlike the college’s Model United Nations program.

Junior Lauren Smith, a politics with an international studies concentration, said the Model EU trip offered her a way to explore her interests in an immersive environment.

“[The college] needs more experiences like this within [the School of Humanities and Sciences], which are not an internship or high stakes but an experience to learn whether you love what will become your job or not,” she said.

“I hope that students get a chance to deepen their understanding of the pros and cons of how the EU works and will consider what this suggests for the role of nation–states in the world,” Arroyo said. “It is also a chance for students to develop and perfect their skills in research, public speaking and intercultural understanding.”

Ithaca College’s Model European Union team helped run, and was recognized at, a conference last week that drew delegations from around the world.