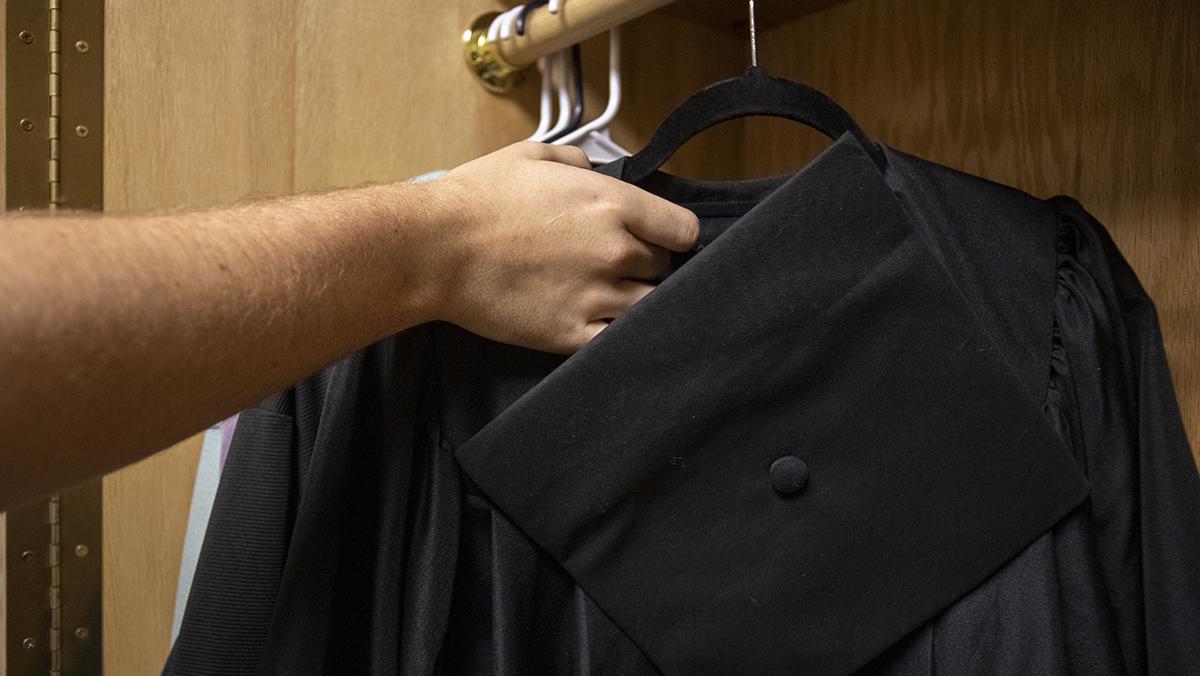 David Tillinghast/The Ithacan
Currently, there are no definite plans for the proposed ceremony and any developments will be known after the Class of 2020 shares their level of interest. Some students have expressed that they have moved on from their time at the college and are no longer interested in having a ceremony after three years.
By Kai Lincke — Contributing Writer
Published: September 20, 2022

When Meaghan McElroy ’20 graduated from Ithaca College in May 2020 during the start of the COVID-19 pandemic, there was no procession, fanfare or graduation caps thrown. Now, the college is considering holding an in-person commencement ceremony for the Class of 2020 in May 2023.

“It would be so nice to finally have that moment to walk across the stage and have my family there,” McElroy said. “But I feel like I’m not the person that I was … when I graduated because it’ll be three years at this point, and now I work full time.”

McElroy said she received her diploma and honors cords in the mail and attended the virtual commencement ceremony from her home Aug. 6, 2020, more than three months after she finished her bachelor’s degree. Her senior year ended abruptly after the onset of the COVID-19 pandemic forced the college to temporarily close its campus and move to online instruction.

McElroy said she did not have an opportunity to say goodbye to her classmates and professors or to mark the end of her time at the college.

“It just felt unceremonious,” McElroy said. “It kind of felt like there was no real closing the door and celebrating the work that I had done for the four years that I was at Ithaca.”

In a Sept. 6 email sent to 2020 graduates from the Commencement Committee, the college wrote that it is evaluating options for a commencement ceremony from May 19 to 21, 2023. The email invited 2020 graduates to fill out a survey to indicate their interest level in the event.

Currently, there are no definite plans for the proposed ceremony and any developments will be known after the Class of 2020 shares their level of interest. MaryAnn Taylor, executive assistant to the President and member of the Commencement Committee, said via email that the committee is assessing interest and will release more details once the survey closes Sept. 25. Taylor said she thinks college leadership does not want to speak more about the commencement until after results from the survey are in.

When McElroy received the survey, she said she initially did not believe it was real. She said she was upset that the college offered a commencement ceremony three years after her class’s graduation.

“It feels kind of meaningless at this point,” McElroy said. “Upon receiving that email, [I felt] mostly frustration and also just disbelief that now is the time that they would choose when I’ve had friends who attended other institutions who have had makeup graduation ceremonies in the last few years.”

Universities like Syracuse University, The University of Rochester and Cornell University held commencement ceremonies for the Class of 2020 during Fall 2021.

Allison Ritting ’20 said via text that she and her friends made the most of their isolated 2020 graduation and celebrated their achievements together. She said she is not interested in returning for a 2023 commencement ceremony.

“I think we … ultimately lost the opportunity to celebrate how we had expected and were looking forward to,” Ritting said. “Having other ways to celebrate has helped to provide some closure, but now that it’s approaching three years since our undergraduate graduation, many of us in the Class of 2020 have already completed grad school or entered the workforce, … which makes graduation feel less relevant and more in the past now.”

Southworth said she would not return for a commencement ceremony because it no longer feels significant.

“It’s not something I think about anymore,” Southworth said. “I’m trying my very best to move on with my life and build my next future in my new life. … I think the height of it, the excitement has completely worn off for me.”

“Being able to celebrate [my master’s] was really what I looked forward to the most,” Southworth said. “I was able to get that and I’m forever grateful for it, but I’m pretty done with my bachelor’s and getting emails about graduation.”

Leighanne Sullivan ’20 said via text that she believes that the college did the best that it could to celebrate the Class of 2020 given the circumstances, and she feels it is time to move on.

“I appreciate Ithaca thinking of us,” Sullivan said. “Unfortunately, there’s no way they will be able to replicate the ceremony we would have gotten had there been no pandemic.”