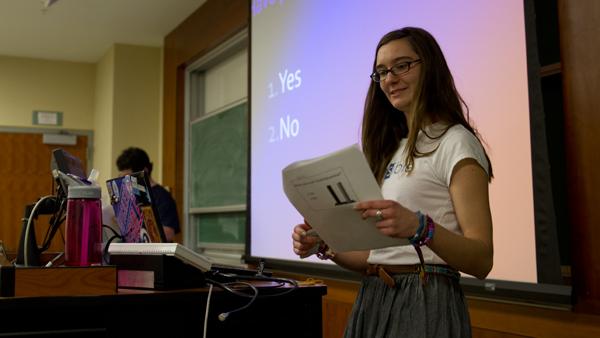 Ithaca College’s Students for Sensible Drug Policy is beginning a new initiative called Know Your Rights, which will educate students on what they can and cannot do when dealing with Public Safety officers.

SSDP, Student Government Association, the Office of Public Safety, the Office of Residential Life, the Office of Judicial Affairs and the Department of Health Promotion and Physical Education are meeting to coordinate how each organization will be a part of the Know Your Rights initiative. Those involved said their common goal is to assist students and make interactions with Public Safety more comfortable for both students and officers.

“[SGA and SSDP] have had a relationship in the past. We passed the Medical Amnesty Policy together and the Equalization Policy together,” Patel said. “We knew that this was a great opportunity for students.”

Last semester, under an Equal Drug Policy headed by SSDP and backed by SGA, students began facing equal penalties for marijuana and alcohol use on campus.

Each organization will add to the initiative in different ways. SSDP will spread information with posters and billboards, SGA will represent students in early meetings and provide funding, and the Office of Public Safety will inform students of their rights and responsibilities in situations such as room searches.

There will be a series of forums open to all students where students can ask Public Safety officers, SGA representatives and SSDP members questions about the initiative. The forums will give students a chance to pose questions and get clarification. They will also discuss topics that SSDP, SGA and Public Safety need to inform students about the most. The forums will be organized to enable discussion between students, resident assistants and the organizations, Patel said.

“We’ve been having a lot of meetings with RAs, because a lot of this will be happening inside residential halls,” Patel said. “We want to make sure that RAs are comfortable with what’s going on.”

Cards containing information about student rights and responsibilities will be used most to reach out to students. Junior Tori Gates, co-president of SSDP at the college, said the template of the cards will be based on the National Organization for the Reform of Marijuana Laws.

“Public Safety will [teach] students how to respectfully assert their rights and … know when it’s appropriate to use the card,” Gates said.

Many details are still in the planning stage, but the initiative is making progress, Terri Stewart, director of Public Safety, said. For the last month, meetings between the six offices and organizations have been more frequent, Stewart said.

The six offices and organizations are drafting surveys with the help of the Office of Institutional Research that will gauge student interest in certain topics before the forums will be organized. The surveys will target as much of the campus student population as possible.

“The purpose of the survey is to reach out to the student body as a whole and invite them for discussions and conversations with Public Safety and find out what it is that they most like to discuss or learn about,” Stewart said.

The initiative is not a result of incidents of tension between students and Public Safety, Stewart said, but rather preempting such incidents.

“I imagine students want to meet the officers that they’re interacting with on a day-to-day basis,” Stewart said. “I don’t want to presuppose that the interactions are going to be poor. I am very hopeful and, in fact, pretty confident that the student body as a whole has had good interactions with Public Safety.”