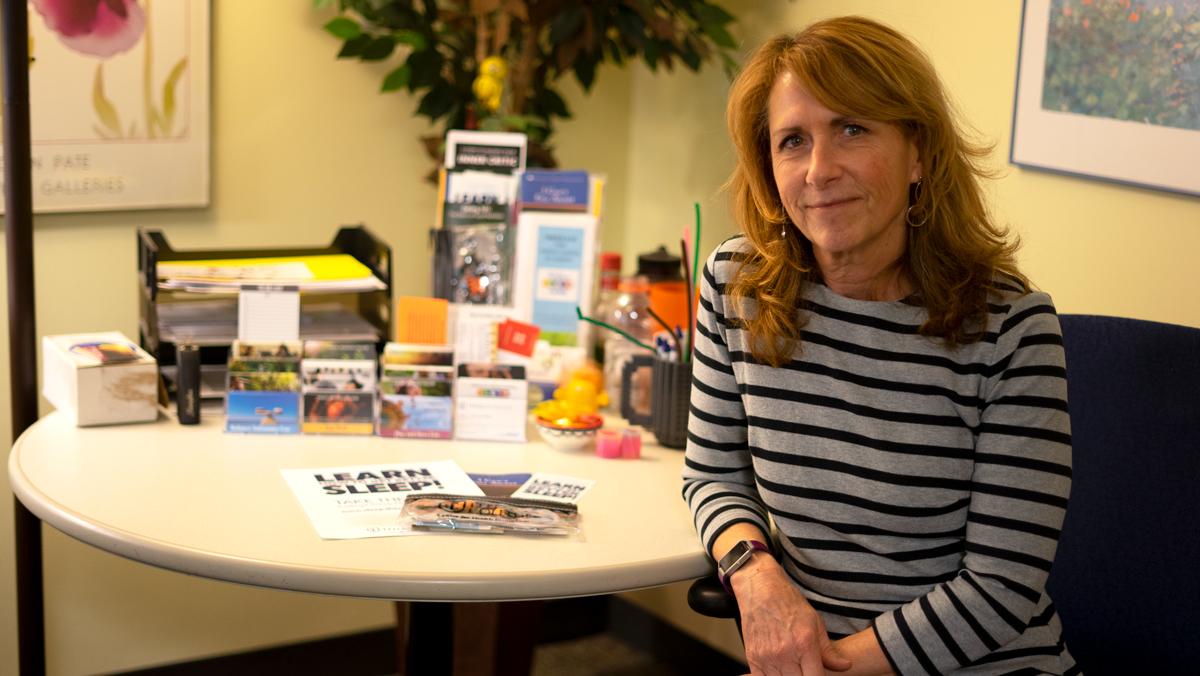 Sabrina Chang/The Ithaca
Nancy Reynolds, program director for the Center for Health Promotion said the tool is a different approach than simply collecting data because it gives an educational response with suggestions on how to better the respondent’s sleep habits.
By Sydney Keller — Staff Writer
Published: March 26, 2019

Ithaca College’s Center for Health Promotion has purchased a sleep questionnaire to provide feedback for students to help improve their sleeping habits.

The center purchased a $3,000 license for one year in order to allow students to access the College Sleep Questionnaire (CSQ) tool. The tool is an anonymous questionnaire (http://sleep.thecsq.com/ithaca) open to all students. It asks questions about one’s sleep patterns, sleep concerns and other behaviors about sleep.

The CSQ is the first sleep program the college has conducted, said Nancy Reynolds, program director for the Center for Health Promotion. Reynolds said the tool is a different approach than simply collecting data because it gives an educational response with suggestions on how to better the respondent’s sleep habits. The feedback includes information regarding sleep patterns, sleep timing, physiological behavior, psychological behavior and basic statistics about sleep.

“There is a lot of research coming out showing how essential good sleep is to everyday functioning, our physical state, our mental health, things like academic performance, athletic performance and even just interpersonal relationships,” Reynolds said. “Poor sleep can impact those areas pretty significantly.”

The license expires in November 2019, and the Center for Health Promotion plans to renew it if students keep using the tool to help fix problematic sleep issues, Reynolds said. Eighty individuals have utilized the tool so far. The license allows the college to customize the tool by using the Center for Health Promotion logo and adjusting questions so they refer to specific resources offered by the college.

The Center for Health Promotion assists students who may have an erratic sleep schedule, students who have problems using electronics before going to bed and students who may need help with time management. After taking the questionnaire, students have the choice to schedule an appointment with any of the health services on campus to talk in person about more specific ways to adjust sleeping habits that the questionnaire feedback does not address, Reynolds said. For example, if someone has psychological concerns, such as anxiety or feeling overwhelmed, then the questionnaire will provide the individual with a resource link to the Center for Counseling and Psychological Services.

Freshman Cassie Goldstein decided to go to the Hammond Health Center because she was struggling to get enough hours of sleep most nights. The center then told her to take the questionnaire.

Goldstein did not agree that the questionnaire feedback was completely accurate.

The CSQ provides links to each service provided by the Center of Health Promotion, so respondents can talk to someone in person who specializes in the problematic area of sleep the student struggles with.

The Center for Health Promotion utilizes the anonymous data from the survey to pursue educational campaigns across campus if the data shows many students face the same obstacles when it comes to sleep, Reynolds said.

Junior Daisy Rudin took the questionnaire to help add to the college’s data on the subject.

“I took it because I was interested in helping people out by helping them find what they needed to find from that questionnaire,” Rudin said.

She said she believed her results were accurate. She has not changed her sleeping schedule but recommends the questionnaire to other students.

Reynolds said students who have more sleep have a more productive day-to-day schedule.

“Students who find they are getting better sleep, what they notice is their mental health improves, their energy improves, they are able to focus better in classes and on assignments, athletically they feel like they are performing better and overall just a better sense of well-being,” Reynolds said.

Sleep and why it is important

‘We Need To Talk’: Sleep Deprivation