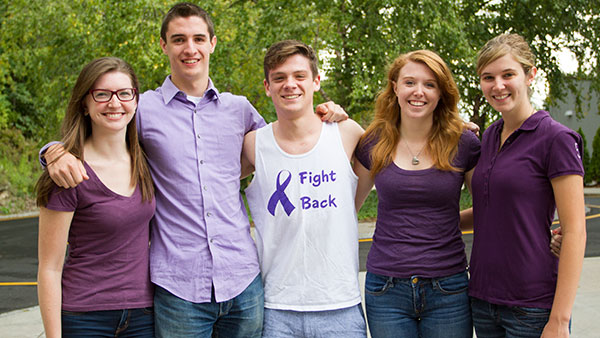 Alzheimer’s, a disease that affects more than 5 million people in the United States, according to the Alzheimer’s Association, has inspired Ithaca College students and faculty to take part in a city-wide fundraising event.

Registration for the 2014 Walk to End Alzheimer’s, Ithaca’s fourth annual fundraising event, will begin at noon Sept. 28 at Ithaca’s Cass Park, followed by a ceremony at 12:45 p.m. and the 3-mile walk at 1 p.m.

Alzheimer’s is a progressive disease that diminishes memory and other mental functions. It is the most common form of dementia, a collection of brain disorders that can interfere with someone’s intellectual and social skills, along with daily activities.

The event will begin with a ceremony to celebrate the fundraising efforts and participants. If a team member has raised $100 or more, he or she will be rewarded with a free walk T-shirt.

Sophomore Ashley Watson said she decided to participate in the walk because her grandfather died last year from Alzheimer’s after being diagnosed with the disease eight years prior. She got some of her friends together and started the team Grandpa’s Memory, united by the common interest in knowing somebody who has had the disease.

“It’s hard to see someone deteriorating before your eyes,” Watson said. “It’s not something you ever want to see anyone go through.”

She also opened a Facebook page for the walk that has had more than 70 students at the college join to learn more about the event.

Junior Marni Blumenthal has volunteered at a senior housing complex, Clare Bridge of Ithaca, for the past two years. She said she decided to join in the walk because some residents at Clare Bridge struggle with dementia and Alzheimer’s.

“I have grown to love and cherish my relationships with the residents,” Blumenthal said. “They have truly become family to me and have helped me grow as a person. I feel very connected to them and to the facility, and I wanted to help the cause in any way I could.”

Blumenthal is part of the team consisting of the Ithaca College Aging & Gerontologic Education Society and the Gerontology Institute team. A.G.E.S. is the college’s gerontology club and serves senior citizens.

Kat Burton, administrative assistant for the Department of Gerontology at the college, has also joined the team with event on the A.G.E.S. and the Gerontology Institute because she said she can see the struggle her friends are going through while watching their parents show signs of dementia and Alzheimer’s.

“I think there’s a lot of hope that the Alzheimer’s Association has funds for research,” Burton said. “I think Alzheimer’s is something that people are afraid to think about, and when they have to think about, it’s too late. We should think about it now while we can, and do what we can now to help find a cure.”

So far, Grandpa’s Memory has raised $380 and A.G.E.S. and the Gerontology Institute team has raised more than $3,000.

Burton said Blumenthal has helped the team raise money for the Alzheimer’s Association by selling bracelets, working with Burton and other faculty members to post articles on Intercom, and talking to local businesses, families and friends to spread the word about the event and ask for money.

Even the smallest donations can add up to make a difference when donated to Alzheimer’s research, Watson said.

“If everybody I come in contact with in the next three weeks were to give me a quarter, I would have like $50,” Watson said. “If everybody that wants to do the walk were to do that, that’s a lot.”

So far, $14,929 has been raised for the event, which is 39 percent of the financial goal, according to the 2014 Walk to End Alzheimer’s website. The money will help educate the public about the disease and advance research methods for treatment. In addition to raising awareness and knowledge about prevention, the Alzheimer’s Association will also help by providing more funding through public policy initiatives.

Blumenthal said she is glad there is an increase in attention to Alzheimer’s through efforts like the walk.

“I think that raising the awareness for it is extremely important,” Blumenthal said. “I am very excited to see the bonds that are created between the walkers and see everyone come together on this cause.”