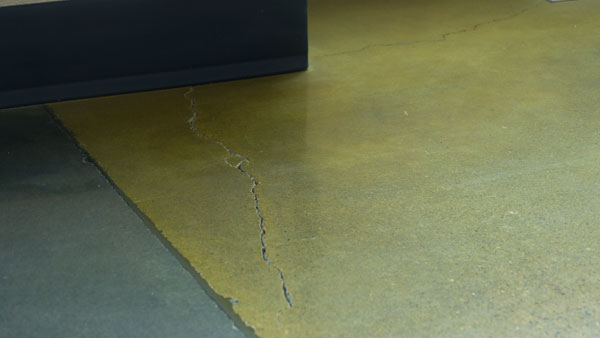 Jennifer Williams/The Ithacan
The $65.5 million Athletics and Events Center had cracked floors when it first opened its doors to the Ithaca College community in 2011.
By Elma Gonzalez — Special Projects Manager
Published: September 12, 2013

In light of recurring leaks and visible cracks on the concrete floor of the Athletics and Events Center, Ithaca College representatives and construction managers will gather next week to discuss these problems.

Howard Blaisdell, project manager of architecture from Moody-Nolan Inc., and the A&E Center architect; its contractor, Jack Brown, project manager of construction from the Pike Company; Gerald Hector, the new vice president of finance and administration; and Zach Newswanger, director of facilities maintenance will attend the meeting, which is scheduled for Wednesday.

The construction of the $65.5 million building began in 2009, and the building was completed and inaugurated in 2011. Its funding came mainly from donations. Some sections of the building, including its upper floor, have stained concrete floors where cracks have been identified. Blaisdell said the material was chosen for its cost-effectiveness.

“It was chosen to provide a decorative finish at a lesser cost than it would’ve been to use tile,” he said.

Blaisdell said the cracks on the concrete floor at the A&E Center are normal and expected.

“Concrete by its nature will crack, and so the small cracks in the floor are typical and are to be expected,” he said. “The small cracks that you see are not out of the norm.”

Brown said because concrete is made with water and natural elements, it will naturally shrink as the water evaporates from the concrete, causing cracks. The wetter the concrete mix, the more it shrinks. According to ConcreteNetwork.com, concrete slabs can shrink as much as 1/2 inch per 100 feet. Brown said the cracks will not affect the structure of the building.

“It’s not structural in nature. Basically, it’s really a cosmetic type thing,” Brown said. “After a certain amount of time, a sealer needs to be reapplied to the concrete. It does have little bit of maintenance to it, but the concrete could last the life of the building.”

In Sept. 2012, The Ithacan reported two water leaks in the A&E Center after a thunderstorm. The college sometimes placed buckets under the tower and under a section of the roof in the track area to temporarily control the water leaks.

“Heavy storms or high wind velocity will force water into the interior of the tower,” Brown said. “It only happens periodically, and it seems to only be when there’s wind in a certain direction.”

The tower works as part of the building’s ventilation system, so water is supposed to penetrate the tower, but pipes are meant to drain the liquid out.

Hector said the contractor and staff from Facilities are still investigating the origin of the leaks.

“They were out [last week] and had a hose up on top of the roof and ran water just to see where the water will go, trying to see if the water was chasing along the pipes, so hopefully we’ll be successful,” he said. “We won’t be able to fix anything until we know what needs to be fixed. That is the challenge. That is the needle in the haystack question. We’ll stay at it until we find it.”

In addition to the leaks under the tower and in the roof of the track, another leak was found in the building’s weight room. Fortunately, that leak has already been addressed, Hector said.

By holding this meeting, the college and the outside companies responsible for the building’s upkeep will try to come up with a solution and a timeline to address the building’s problems.

“I want to get everybody in a room and look everyone in the eyes and say, ‘Guys, listen, this is almost a two-year problem, so we have to get this thing addressed,’” Hector said. “That would be my approach when we meet, just to get to the bottom of it and get some answers, and try to come up with a timeline to resolve it.”