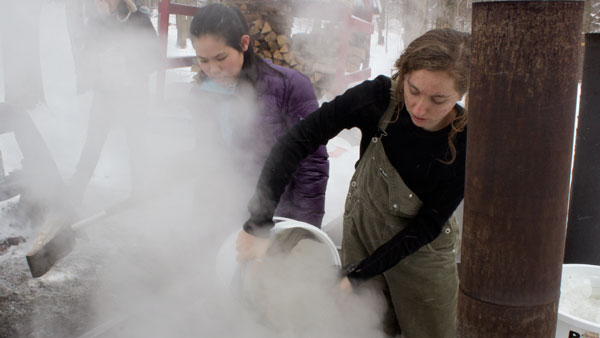 The environmental studies program will be temporarily suspended, beginning Dec. 20, while undergoing a departmental curricular review. It is estimated that the minor will resume in the fall of 2015. The suspension was announced by the department in an Intercom announcement on Dec. 5.

Jason Hamilton, associate professor and chair of the environmental studies and science departments, said students who are currently enrolled in the minor will be able to complete it, and applications submitted before Dec. 20 will be considered for approval into the program. However, after that cut-off date, no more students will be accepted for enrollment until it is resumed.

The department is undertaking a curricular review that is part of the required Academic Program Review, set by the Office of the Provost. All academic departments must participate. Hamilton is overseeing the department’s review process.

At five years old, the environmental studies department is the youngest at the college, and it’s also one of the fastest growing. Hamilton said when the environmental studies curriculum was designed five years ago, it was expected that 20–25 students would join the program annually, but the department has been bringing in twice that with 40–50 freshmen enrolling each year. Hamilton said the “exponential” rate of enrollment played a role in the decision to suspend the minor.

“What’s going on here is that we’re growing so fast that we basically can’t keep up with it,” Hamilton said. “We’ve had to slow things down temporarily.”

Hamilton said he wanted to stress that the decision to suspend the minor wasn’t made because the curriculum was faulty, but because faculty members are stretched too thin to properly focus on redesigning the minor. The entire department is also currently working on reviewing the Bachelor of Arts and Bachelor of Science degrees.

“Rather than being a negative thing for the department and students, what this means is that we became more popular than we ever imagined,” Hamilton said.

Sophomore Kimberly Capehart, who is enrolled in the environmental studies minor, said she was already considering dropping the minor because she wasn’t sure if it was right for her. Following the announcement, she scheduled a meeting with her academic adviser to discuss changing minors. She said she was concerned that the understaffed department would negatively affect her education, and the vague communication of the suspension made her worry there was something wrong with the minor.

“It was really frustrating to me that they only announced it on Intercom, because I check Intercom, but not religiously, so I completely missed it,” Capehart said. “My adviser didn’t tell me, the department didn’t tell me, there was no email sent out. As a student in the minor, I think they owe me that.”

Senior Katelyn Madison, who is also in the environmental studies minor, said she wasn’t surprised to hear the department was undergoing review because of the rapid growth of the program.

“I know the department has been growing … I hear more and more about people having interest in environmental issues,” Madison said. “I definitely think [the review] will be worth it in the end.”

Student confusion and alarm over the announcement prompted the release of a second Intercom announcement Dec. 11 that reiterated currently enrolled students won’t be affected, cited the growth of the department as a reason for suspending the minor and asked for students’ patience as the department undergoes this process.

Hamilton said the department’s ultimate goal is to make sure the program is suitable for the influx of enrolling students and the curriculum reflects the changing times.

“The world isn’t what it was five years ago, so we’re redesigning things because it’s a new place, and we’ll probably redesign it again five years from now,” Hamilton said.