College works to promote role of women in climate change 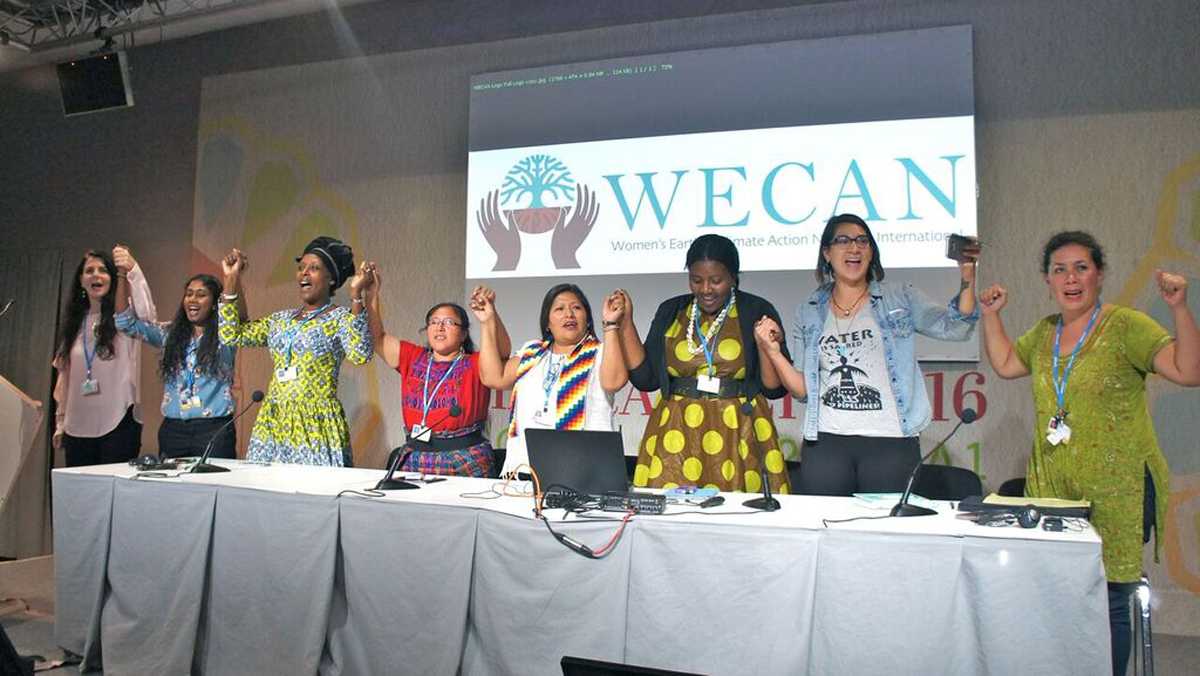 Courtesy of the WECAN Foundation
At COP22 in 2016, representatives from the Women’s Earth & Climate Action Network host a side event as speakers stand together in solidarity and action. WECAN partners with the college to share seats at the annual UN Climate Conferences.
By Maggie McAden — Staff Writer
Published: December 6, 2017

The climate conference is a gathering of leaders of national governments, non-governmental organizations, businesses and other groups with stakes in the environment.

WECAN is an organization that works to engage women worldwide in issues of climate change and sustainability, according to the organization’s website. Shevory said many people involved in the climate conferences are men. Women made up less than 20 percent of national delegation heads and 32 percent of delegation members at the 2012 UN Climate Change Conference, according to a 2013 report by UN Women and the Mary Robinson Climate Justice Foundation.

“It’s not an even playing field, and what WECAN does is really important, I think, because it’s really highlighting the women’s role in dealing with climate issues,” Shevory said.

Wyolah Garden, administrative coordinator for WECAN, reached out to Shevory to ask if the organization could use some of the college’s seats. The two began their partnership in 2015.

“We have been able to leverage our scarce resource, the slots that we have, in order to facilitate some really significant things happening at the conference,” he said.

Osprey Orielle Lake, co-founder and executive director of WECAN, said in an email that WECAN began searching for NGOs that had potentially unused seats in 2015.

“Because the assigned number of delegates for Civil Society is often limited, we wanted to find a like-minded accredited NGO that would be interested in our efforts at the negotiations and would allow us to use their potentially unused allotted delegation spots,” she said.

WECAN’s main goal at the conference is to give grassroots, indigenous and frontline women leaders a voice to interact directly with policymakers, Lake said.

“The conferences kind of fell off the radar screen,” Shevory said. “They didn’t seem quite as significant as they had been previously, but then things got kind of revived moving up toward Paris because there was a move to try to develop a new system post-Kyoto.”

Shevory said students pay out of pocket and had to miss class to attend the conference. The lack of available slots is the biggest reason students do not attend anymore, Shevory said.

From the Montreal trip to the 2010 trip to Cancun, Shevory said the college had 10 to 12 slots. He said 10 students were registered for the 2010 conference until the number of slots was cut to five shortly before the conference. He said organizations submit names in July and find out how many slots they have in September or October. Shevory said that in 2015, the slots were cut down to two. He said NGO slots are cut in response to growing national representation, as national delegations aren’t limited in size by number of slots.

He said the number of slots available has declined so significantly that he can no longer bring a substantial group of students.

The conferences have changed the way Shevory thinks about climate change in his classes, in organizing the Finger Lakes Environmental Film Festival and in terms of his worldview, he said.

Schlesinger said he hopes that students will begin attending again in the future.

“I’m hoping at some point in the future that maybe we would open this up for students again,” Schlesinger said. “It’s a tremendous opportunity.”

President Peggy R. Williams signed a letter of commitment to the American College and University Presidents Climate Commitment on May 29, joining leaders from 393 institutions across the country pledging to reduce their carbon footprint. �In signing this commitment, we are taking another important step in addressing the human causes of global warming and in…