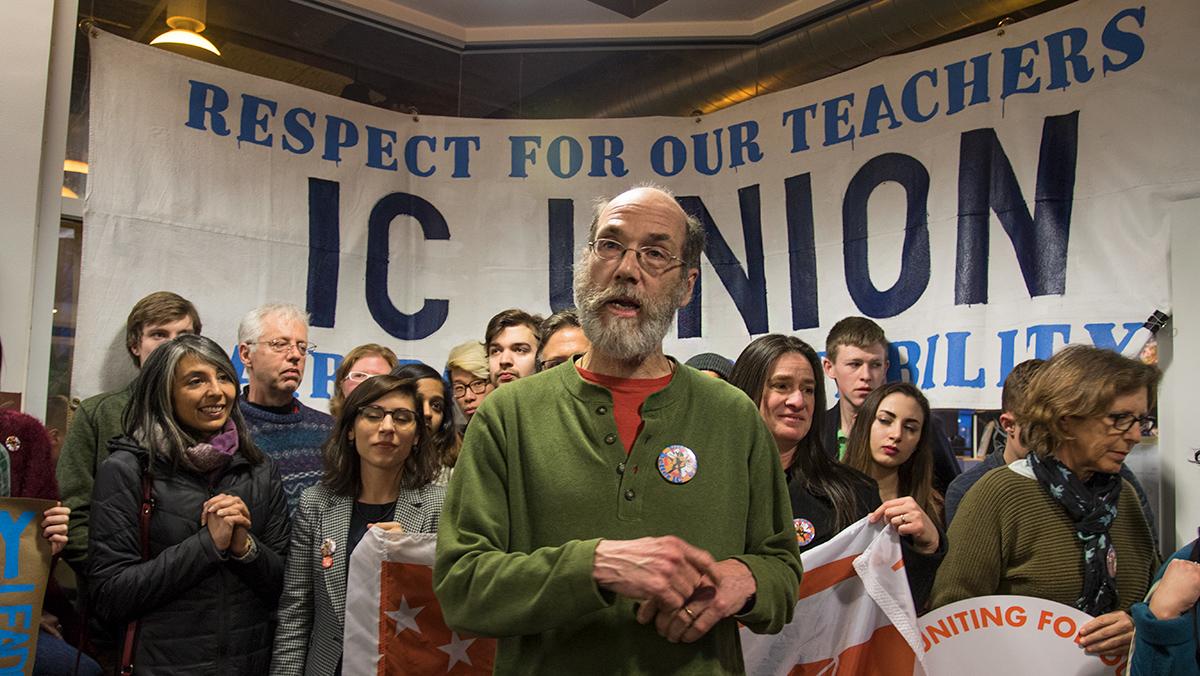 The decision to release strike-vote numbers is disputed among contingent faculty unions across the country. Though some unions decide to release these numbers to the public, keeping them confidential is not an unusual practice. However, some community members criticized the move for lacking transparency.

The most recent progress in the union negotiations happened at the bargaining sessions on Feb. 21 and 24. The union denied the offer the administration made it on a pay increase, saying it was not enough to satisfy its needs. The union has not yet decided if it will attend another bargaining session.

The decision to release these numbers is determined on a union-by-union basis, said Ken Mash, president of the Association of Pennsylvania State College and University Faculties, the union for Pennsylvania State institutions. Mash, whose union went on strike this past October, said 82 percent of faculty members in the APSCUF union voted, and 93 percent of them voted in favor of authorizing a strike. Mash said the union released the numbers to show the gravity of the situation.

“What we wanted to convey … was our degree of anger and how upset our faculty were at the time, so we thought it was important to communicate those numbers,” Mash said.

The APSCUF union represents both tenure-track faculty and adjunct faculty, so the union leaders were less hesitant to release these numbers, as some of the faculty members were less vulnerable, Mash said. He said he understands how some a union may not want to release these precise numbers, especially if it is a new union or it only represents contingent faculty members.

This December, Barnard College authorized a strike vote as well. In the vote, 119 faculty members voted in favor of authorization, and 15 voted against authorization. Georgette Fleischer, a member of the Barnard Contingent Faculty United Automobile, Aerospace and Agricultural Implement Workers of America Local 2110 and former member of the bargaining committee, said her union released the precise numbers because of the good turnout it had, despite the fact that some contingent faculty members were not on campus during the fall semester when the vote was held.

“In our case, we did want to give precise numbers because we felt a commitment to being transparent with our membership,” she said.

Sarah Grunberg, instructor in the Department of Sociology and faculty leader for the Service Employees International Union Local 200United, said that because of the vulnerability of the contingent faculty members, releasing these numbers while the committee is still bargaining could put the faculty members at risk. If the voter turnout was deemed large enough, she said, the administration could label this body of faculty as problematic and retaliate against its members by replacing them or opening up their positions to a national search.

“The administration is then able to narrow down perhaps which members were voting ‘yes’ and were more involved in this process,” she said.

Dave Maley, senior associate director for media and community relations at the college, said numbers do not give away the identity of faculty and that without knowledge of the specific positions these faculty were in, the college would not be able to fill them.

Erin Francisco, lecturer in the Department of Writing, said she was not bothered by the union’s decision to keep the numbers confidential. She said she felt that the people who really cared came out to vote, and those who did not vote may have just been on the fence about what they stood for.

“I feel that if people feel really strongly one way or another, they’re going to come out and vote,” she said.

The decision for the vote to stay anonymous was unanimous among bargaining committee members, Grunberg said. She said releasing the numbers would give the administration a way to know what to expect if a strike were to happen, like planning for the number of faculty members it may have to move around, Grunberg said. This would not be beneficial for the union, she said, as a strike is supposed to make a statement and be disruptive.

Kurt Lichtmann, lecturer in the Department of Health Promotion and Physical Education, wrote about his concern with the union’s not releasing the numbers in an open letter to The Ithacan. He stated he felt the vote could not be validated because no one was able to know how many faculty members actually voted in favor of or opposed to the strike.

Michele Kramer, president of the Wilfrid Laurier University Faculty Association in Canada, said it is normal for unions to not give a specific number in regard to a strike mandate vote. When WLUFA held its strike mandate vote, it did not release the number of faculty members that participated so as to not give the administration leverage, Kramer said.

Though the number of people who participated in the strike vote was not released to the public, Grunberg said the union was extremely happy with the voter turnout.

“We are strong as a membership, and I think we have been showing that in the continued action that we’ve had in this past week,” she said.

A press release issued by the college on Feb. 14 indicated the college was disappointed a strike had been authorized while negotiations were still taking place.

Kramer said strike mandate votes are commonly used when a union feels it isn’t experiencing the progress wanted. They show that the unit is solid if a strike is needed, she said.

Maley said it was surprising that the union did not release the numbers of who voted for and against the strike to its members or to the public.

Grunberg said the results of the vote aligned with the estimates that they had after their initial conversations with people weeks before the vote.

She said she feels it is not in the union’s best interests to release specific numbers right now, but if the unions feel it is in their interests later, they might release them. The strike vote is not held to let people know how many people will strike, but rather that the level of support for one exists, Grunberg said.

“I think above all, a vote to authorize continued action is a vote that expresses the deep solidarity that we have on our campus,” she said.