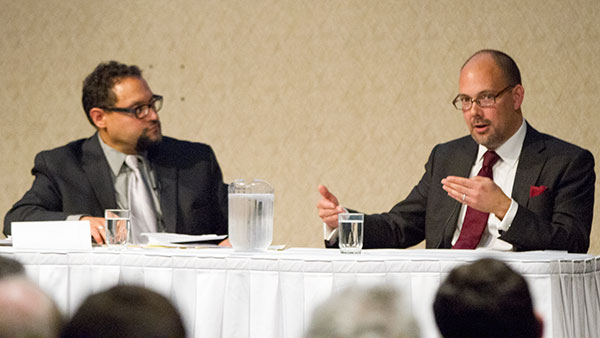 With President Barack Obama’s announcement to use drone air strikes against the Islamic State militants in Syria and Iraq, drone use continues to be one of the most controversial topics in modern technology.

At Ithaca College’s ninth annual Constitution Day presentation, Carlos Figueroa, assistant professor of politics, and Jens David Ohlin, professor of law at Cornell University whose studies focus on international and criminal law, discussed the legal legitimacy of the U.S. government’s use of combat drones to kill international and domestic targets that pose threats to national security.

Sponsored by the college’s Office of the Provost, the Department of Politics and the Park Center for Independent Media, the event, titled “Targeted Killings, the Constitution, and You: U.S. Drone Policy and Citizens’ Rights,” was held on Sept. 17 in Phillips Hall’s Emerson Suites. One-hundred twenty people attended the event.

Ohlin said the legality of targeted killings, or the premeditated acts of lethal force by states to individuals outside their legal custody, through drone usage by the U.S. government is a highly contentious subject.

Ohlin said he wanted the government to be more transparent about the effectiveness of drones and the rationale for determining which individuals are considered targets.

“Civilian damage isn’t illegal because [the government] can always kill civilians as long as it’s in the context of collateral damage, but the constraint on that is that the collateral damage on the civilians can never be disproportionate to the value of the military target,” Ohlin said.

However, Ohlin said collateral damage cannot be accurately weighed because the government does not disclose the value of the military target, which is the level of threat the target poses.

Another problem of the U.S. drone policy that Ohlin mentioned was the executive branch having too much power in deciding which targets to initiate lethal operations. He saidU.S. Congress should debate whether a terrorist is a serious enough threat to call for targeted killing. He said if the terrorist does not pose a large threat, then the executive branch can only take police actions, meaning capture instead of assassination.

Ohlin’s statement was followed by several questions from the audience members who were skeptical of Congress.

Freshman Andrew Garoppo said he wondered whether the divisions and difference of interests in Congress would delay the process of carrying out attacks on terrorists because of disagreements between the U.S. Senate and the U.S. House of Representatives.

“Congress can be too slow to deal with the terrorist issues, so would congressional debate be the best way to fight the war on terror?” Garoppo said.

Ohlin said even though partisan divisions in Congress exist, open deliberations on determining who is considered a target must be presented and debated on the congressional floor, where citizens can know what is happening to whom.

Sophomore Kenya Allen said the presentation helped her to better understand the drone policy. She said she agreed with Ohlin that Congress ought to play a bigger role.

“It was very insightful, and it provided enough facts so that I could get a deeper understanding with what’s going with the situation in drones … I think that Congress has a lot of power and that sometimes they don’t use it for the best,” Allen said.

Gene Zagorsky from Flushing, New York, said he enjoyed the discussion but wished there was more time for questions. Several students from both schools and off-campus visitors were asked to shorten their questions because higher-than-expected number of questions for the half-hour Q&A session.

In response to the high volume of questions, both professors said there may be a partnership between the college and Cornell University to hold a week-long discussion on drones in the upcoming spring semester.