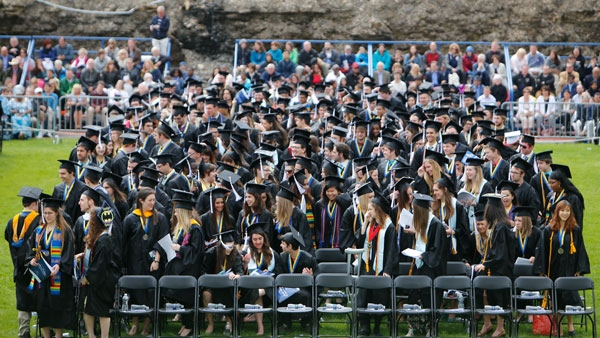 Tucker Mitchell/The Ithacan
Members of the Class of 2014 gathered May 18 in Butterfield Stadium to celebrate their graduation.
By Jack Curran — Editor-in-Chief
Published: May 19, 2014

Ithaca College honored 1,345 students as they became alumni May 18 when it held its 119th Commencement. Members of the Class of 2014 and their families gathered at Butterfield Stadium to celebrate the college’s latest graduating class.

The ceremony began with a salutation by Marisa Kelly, provost and vice president of educational affairs. In her address, Kelly congratulated students on the work they had put into their education.

“You’ve been dedicated to your educational experience, to expanding your knowledge, your skills and your understanding of yourselves and the world in which you are a part,” Kelly said.

Following the salutation, Ithaca College President Tom Rochon introduced the Commencement speaker Chris Regan ’89. Regan graduated from the college with a degree in cinema and photography and is best known for his work as a writer for “The Daily Show with Jon Stewart.”

In his address, Regan thanked the college for everything he learned while attending. Regan said the most important thing he gained from his time at the college was his sense of identity.

“College teaches you many things,” he said. “This one has taught you guys how to operate a camera, run a business, tell a story, how to help someone overcome a disability, how to lead an orchestra, how to teach others what you’ve learned, but I think the most important thing any college or university teaches you is who you are.”

Regan joked that every Commencement address is supposed to issue a challenge to the graduates. Instead, he said he would only offer a suggestion.

“My suggestion is to go forth and boldly stride, yes, but to make sure to have some fun,” Regan said. “Enjoy it, laugh a little, lighten up.”

Erin Smith, Class of 2014 president, thanked her classmates for the discussions she has had with them. Smith said thanks to their time at the college, the graduates are ready to continue learning about new ideas.

“We came in thinking that we knew everything we needed, and now we’re leaving completely content knowing that we do not,” Smith said. “We are leaving open to having those conversations that change the way that we look at things … and help us understand that there’s always going to be more to learn.”

Just before the conferral of degrees, Jennifer Segal ’14 and Zachary Woelfel ’14, senior class gift co-chairs, presented the Class of 2014 gift. More than 600 members of the class contributed to the gift, which totaled $10,850 toward the annual fund.

After the conferral of degrees, Rochon closed the ceremony with the call for the graduates to become “CEOs of your own lives.” Rochon said to do this, the graduates must define who they are, develop a strategy for how to achieve goals and decide what their standards of performance will be.

Rochon said he encouraged the graduates to use their education from the college to define their own lives based on who they want to be, and not by what happens to them.

“To be the CEO of your own life is to live your life in a conscious reflective way, rather than allowing yourself to be defined by the opportunities and the disappointments that will surely confront you, just as they confront everybody,” Rochon said. “From this moment forward, you will be the CEOs of your own lives. From this moment forward, you will also be Ithaca College alumni.” 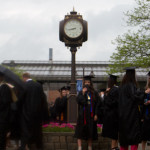 Students gather on the Academic Quad before the ceremony. 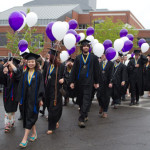 Students march from the Academic Quad to Butterfield Stadium during the processional. 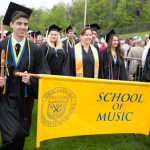 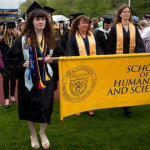 The School of Humanities and Sciences marches into the stadium. 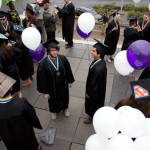 Members of the Class of 2014 wait for the procession to begin. 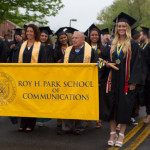 Students from the Roy H. Park School of Communication wait to enter the ceremony. 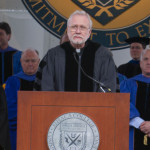 The Rev. Carsten Martensen, Catholic chaplain and director at the college and Cornell, opens the ceremony with a prayer. 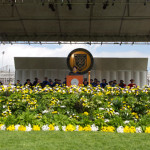 Ithaca College President Tom Rochon closed the ceremony by advising students to “be the CEO of your own lives.” 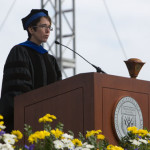 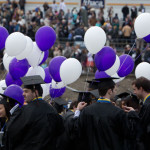 This ceremony was the college’s 119th Commencement. 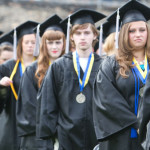 The graduates wear different chords and stoles to signify their academic achievements. 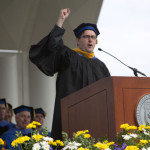 Chris Regan ’89 suggests that the Class of 2014 should try to have fun. 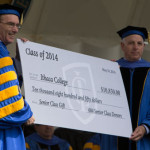 The Class of 2014 contributed $10,850 to the Ithaca College annual fund as its class gift. 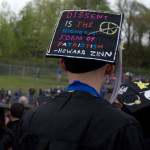 Some graduates decorate their mortarboards to make them more personal. 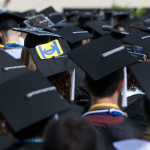 After being presented by their deans, the students were awarded their degrees.