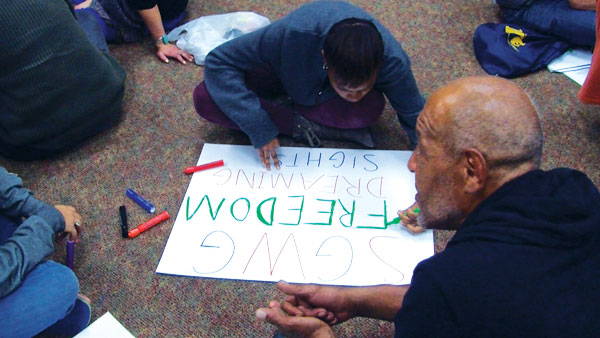 Community groups across Tompkins County are mobilizing to question an approved $900,000 county jail expansion project, which would increase the co-ed facility by seven additional beds, allow for internal renovations and strengthen its security and control systems.

At the next Tompkins County Legislature meeting Nov. 7, members of the community plan to address concerns about financing the project.

Last month, the Tompkins County Legislature unanimously approved phase one and phase two of the proposal to expand the Tompkins County jail. The projected cost of the expansion project is $900,000, which includes the design for phase three. Though phase three has yet to be decided, it will likely include space for a library and increased security along with the seven additional jail beds.

Members of county community groups, including the Ithaca Prisoner Justice Network and the United Citizens for Alternatives to Jail Expansion, said they were surprised by how quickly the decision was made. One dissenting group was the Shawn Greenwood Working Group. The group was formed after Shawn Greenwood, an African-American Ithaca resident, was killed in 2010 by Ithaca Police Officer Brian Bangs. The group’s primary focus is on policing and working to combat social injustices and end the perpetuation of the “New Jim Crow,” or the systematic political, economic and social subordination of people of color through mass incarceration.

Junior Kayla Young, member of the Shawn Greenwood Working Group, said she was caught off guard by the legislature’s decision.

“It was like a flash,” she said. “Within two weeks or something, it was passed. It didn’t give us enough time to really just sit there and think about it and hold it in, or even to mobilize.”

According to Raymond Bunce, lieutenant of the Corrections Division at the Tompkins County Sheriff’s Office, the maximum capacity of the facility is 75 inmates. Bunce said there are currently 94 inmates within the sheriff’s custody, 12 of whom were boarded out.

The county jail can accommodate a temporary maximum of 93 inmates, which is authorized by a state variance. Bunce said the state strongly advised against admitting beyond 85 inmates in the facility. The exceeded capacity is one of the reasons the jail “boards out,” or sends prisoners to other county jails.

Joe Mareane, county administrator of the Tompkins County Legislature, said another reason for boarding out is the classifications within the jails.

“Because you cannot mingle these different populations in the jail, it could be that you have to board out some inmates, even if you have empty beds in the facility,” Mareane said. “You can’t house a woman with a man, you can’t house an underage — a juvenile — with an older inmate.”

In addition to reducing the frequency in boarding out other prisoners to nearby county jails, Mareane said the expansion project will also save money. The boarding out process costs approximately $29,000 annually for each inmate who is transferred. Over the course of a year, it costs about $240,000 to board out an average of eight inmates, he said.

The funds for the boarding out process are currently paid by taxpayers. Mareane said the same funds used to board out inmates will be used to pay back the money borrowed for a bond to fund the expansion project.

Mareane said because the cost to expand the jail facility is lower than the cost to board out, the county could see savings after the first year of building the project.

“It’s not a mountain of money that we will save, but we do expect the savings to outweigh the costs,” he said. “Those savings could end up doing one of two things: It could either lower taxes, or we could redirect the dollars that are currently going to board-out into other areas.”

According to Mareane, this expansion would have another effect — allowing prisoners, who are mostly from Tompkins County, to remain closer to their families here in the county.

“It is certainly better to be in a place where you’re close to your friends and family and your support system than if you’re in some county elsewhere in the Southern Tier,” he said.

The Tompkins County Expansion project has created a larger discussion about the prison industrial complex. Paula Ioanide, assistant professor in the Center for the Study of Culture, Race and Ethnicity, said this complex primarily deals with the economic exploitation of mass incarceration.

“The prison industrial complex is a term that was introduced to explain that the unprecedented expansion of jails and prisons in the United States in the 1980s in particular, have much more to do with economics, and essentially making money off of the prison-building project, than it has to do with crime,” Ioanide said.

Members in the Shawn Greenwood Working Group said they believe there is a connection between this complex and the expansion project.

Mareane said the intention behind the expansion project is not to fill more beds.

“The argument does not apply here,” Mareane said. “The argument has merit in some places where large jail expansions are being proposed. We’re not creating more beds to be filled. We’re saying that right now, the number of people who are sentenced to the county jail or who are awaiting trial exceed our capacity to accommodate them.”

Young said students at the college should also be concerned about this issue, because students on this campus are also members of the community.

“Even though I’m from New York City, I live in Ithaca for most of my year, which means I have a responsibility to this town,” Young said. “We live in a bubble, a bubble that just can’t seem to be popped. But I think with this, we can start, like, creating some ripples in the bubble.”