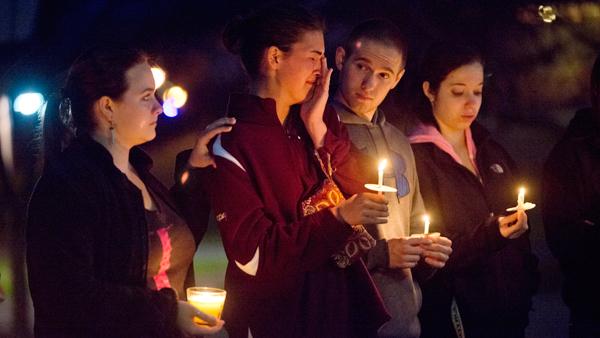 In the wake of the Boston Marathon bombings that killed three and injured 176 Monday, Ithaca College students gathered last night to lend each other support. Thirty-four students stood in a circle by the Textor Ball holding candles and sharing comforting words.

“Reaching out to others and paying it forward is the best way we can show that the good can outweigh the bad,” freshman Kristen Pompey from Southborough, Mass., said at the memorial. “That’s the best way we can cope with this, even though it’s really hard emotionally to not be home, but we can represent Boston the best way we can, being here at Ithaca and spreading that strong and good feeling that everything is going to be OK.”

A Boston tradition turned to chaos Monday when two bombs went off by the finish line at the Boston Marathon. In the aftermath, Bostonians have united — both on the scene and online — to help the victims. Among the injured and killed, none were from the Ithaca College community.

“Patriots’ Day and Marathon Monday are usually celebrated all across Boston, but today our cheers were turned to prayers,” Mayor Thomas Menino said Monday. “But Boston is strong and resilient, and we come together in times of need. We will get through this, and we will find those responsible.”

The three killed in the attack have been identified as 8-year-old Martin Richard from Dorchester, 29-year-old Krystle Campbell of Arlington and a graduate student at Boston University from China. A Chinese paper identified this victim as Lu Lingzi.

Photos and videos showed the sidewalks of Boylston Street spattered with blood, storefronts blown out from the blast and people tying makeshift tourniquets.

Senior Chris Lotsbom, who was covering the marathon a couple of blocks from the bombings at a media center at the Fairmont Copley Hotel, said when he heard the noise, the fact that it could be a bomb did not come to mind.

“I came out and saw people just running by in the hotel, running in the lobby crying, immediately wondering what happened,” he said. “I saw a past Boston Marathon champion who I recognized, Jack Fultz, outside, and I asked what happened, and he said there was an explosion.”

Being in the media center, Lotsbom said he was surrounded by reporters from the Boston Globe and other media organizations. After the bombings, Lotsbom and the other occupants were on lockdown and were watching the day unfold on television monitors.

Sophomore Evan Lazar, who is from the Boston area, said his uncle was running in the Boston Marathon on Monday. He said he found out about the bombings while he was at the gym.

“I saw scenes with explosions and fire, and I actually assumed that it was unfortunately another country,” Lazar said. “When I looked up again and saw that it was the Boston Marathon, I left right away and tried to call my family, and they didn’t answer right away because they had shut down the cell phone [service] in the Boston area for about 45 minutes to an hour. Finally, about an hour later, I started getting calls from my parents and my aunts and uncles. They were all OK.”

Lazar said the Boston Marathon is a huge part of life in Boston and a real center of pride.

“I think that people don’t realize how much pride Bostonians take in the Boston Marathon,” he said.

John Davis ’11 was a spectator at the Boston Marathon supporting his girlfriend, Alicia Burillo, and their friend Melanie McCormick. At the time of the blasts, Davis was meeting with his friends, Burillo and her family at the family and friends meeting area, located at the intersection of Stuart and Berkeley.

“We were just sitting there, and we heard two really loud noises, and your first thought isn’t ‘Oh that’s a bomb,’ so we kind of just didn’t think too much of it,” Davis said. “Then we could start to hear people screaming, then one of our friends got a phone call from her mom immediately and she was like ‘You guys got to get out of there.’”

Davis and his friends then walked two miles to the Renaissance Hotel in the seaport district, because there was no other transportation available — everyone was scrambling for taxis and the subway was shut down.

When the group got to the hotel, they stayed in the lobby with other marathon runners and their families. Davis said he immediately began texting his family and friends to tell them he was OK.

“There were a lot of people just sitting in the lobby watching the news, doing pretty much the same thing: calling family, trying to figure out what was going on,” Davis said.

During and after the bombings, social media and the Internet played a key role in connecting people amid the confusion and spotty cell service. Google created a service to find people. There was also a Google Document created to help people find rides and a place to stay for the night.

Lotsbom said he was unable to make calls during the day and instead was posting updates to Twitter and Facebook to let family and friends know he was OK.

Lotsbom said when he finally left the hotel a few hours later to head to his home in Walpole, Mass., law enforcement officers were still on the streets, and he was struck by the scene.

“Usually it’s loud, but it was silent,” Lotsbom said. “All you could hear was either sirens or the helicopter above, and that really hit me because I’ve been in Boston the last couple of nights, and it’s been loud. You could feel the energy from the runners getting ready to race, but then it was silent tonight.”

Lotsbom said he has been to 17 consecutive Boston marathons and part of the media for five years. Regardless of the events Monday, he said, he will attend next year’s marathon and expects it to be a strong showing.

“Marathon Monday, especially to me, it’s such a big day, and knowing the Boston Marathon and knowing runners, I think they’ll all band together, and this time next year, it will be the strongest Boston marathon ever.”

On Thursday, Ithaca College will hold an interfaith gathering from noon to 1 p.m. at Muller Chapel, where members of the college community can seek support.

Below is a collection of tweets from the Ithaca community as they reacted to the Marathon Monday bombings.