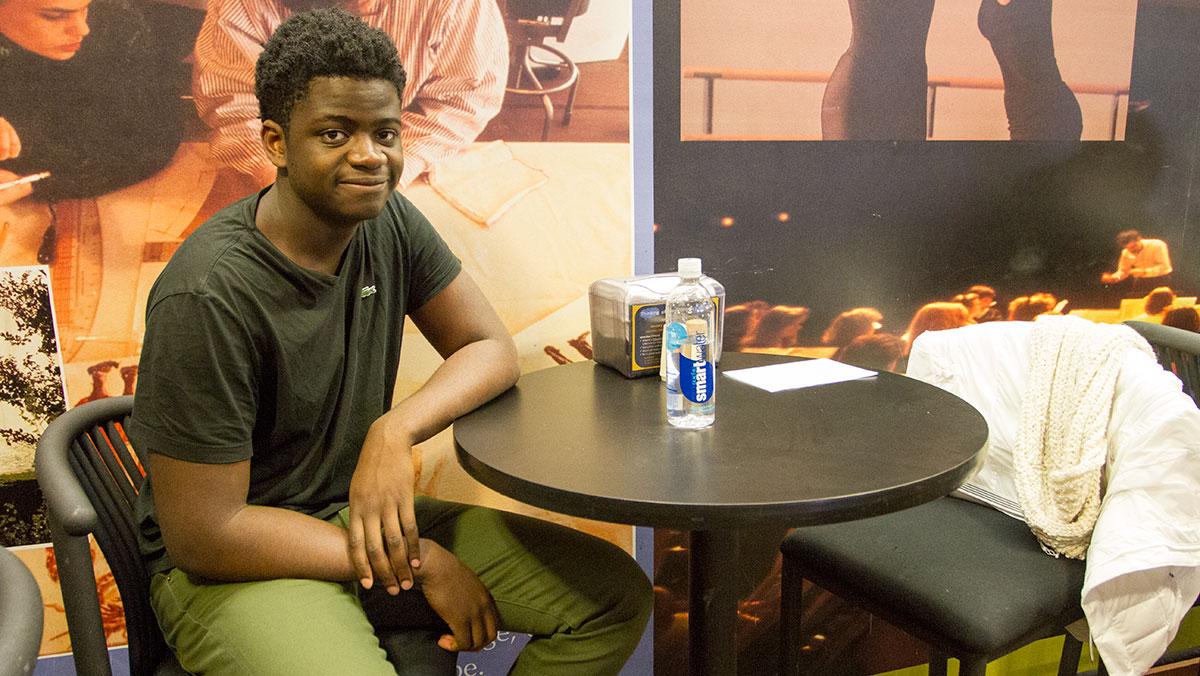 Matt Gurburg/ The Ithacan
As a second-year student, Laurence Welch plans to graduate with a bachelor's degree in computer science in May 2015.
By Maura Aleardi — Staff Writer
Published: March 4, 2015

“That’s the kind of lack of seriousness that he brings, but he has a certain intensity that he also brings,” Turnbull said.

This prank-pulling student will be graduating at age 19 from Ithaca College after just two years at the school.

As a second-year student, Welch plans to graduate with a bachelor’s degree in computer science in May 2015. He said he graduated from Bard High School Early College with a high school diploma and associate’s degree in liberal arts, which allowed him to enter the college with 64 credits and full completion of the liberal arts requirements. Bard High School Early College provides its students with two years of high school, then two years of college.

Registrar Brian Scholten said it is becoming more common for transfer students to enter the college with a liberal arts degree in order to lessen the amount of credits needed to fulfill the college’s liberal arts and Integrative Core Curriculum requirements.

Welch said his passion for computer science extends back to his childhood. He said as a child, he would take apart his computer for fun, trying to figure out what exactly would make it break. He recalled one instance when he took apart every single electronic device in his house. While his parents were not thrilled with endless broken electronics, he said they loved his inclination to explore.

Today, Welch said, he still spends time on his computer trying to figure out how things work. Only, now, he said, the exploring is done through reading technical papers and thinking of new things to build.

Welch’s friend, sophomore Kaitlin Logsdon, said it’s crazy that he is graduating as a sophomore, but it is not surprising. In addition to Welch’s intelligence, she said he is an exceptionally sincere friend.

“Laurence is a very genuine and observant person,” Logsdon said. “He’s observant in that he just really cares about people, which is something that I really appreciate about him.”

Though he’s graduating early, Welch said he never has more than three classes a day. He said he fills up most of his free time with extracurricular projects or creating new projects that he can work on.

“If I’m sitting in my room not doing anything, chances are something’s not being done, is the best way to describe it,” Welch said. “I mean, if it’s it not coursework that needs to be completed, I’ve got an independent project that needs to be done or different things. I also work on multiple apps with my friends.”

Turnbull is currently working with Welch on one of his main extracurricular projects, Welch said. The pair is part of the production team for MegsRadio, which introduces listeners to local Ithaca artists through a customizable radio station similar to Pandora.

Turnbull recruited Welch to work in the research lab during his first semester at the college after he took Turnbull’s second-level computer science class. Turnbull said he would give Welch projects to complete in addition to the typical coursework and immediately got him into the research lab and working on MegsRadio. While it is typical for Turnbull to recruit freshmen or sophomores to work in the research lab, he said it is rare for underclassmen to advance and obtain a leadership role as fast as Welch did. Turnbull said it was clear Welch was more advanced when he finished the class’s final project within the first two weeks.

Welch said his heavy workload keeps him busy, which is a lifestyle he much prefers. Logsdon said this is a characteristic that brings them closer together.

“Something that I really appreciate about Laurence is he’s very focused and motivated in what he does,” Logsdon said. “I like to keep busy, and he and I definitely share that. We talk a lot about trying to find balance in being busy and then also being a college student.”

This desire to keep busy is Welch’s one weakness, Turnbull said. He said Welch often takes on too many projects, which would typically be problematic, but Welch is able to overcome it.

“If I had to say there was one weakness of Laurence’s it’s that he gets into too many things and that sometimes a little bit of focus would allow him to make more progress in one thing,” Turnbull said. “He has an incredible work ethic, so he can handle it, but some students would grind to a halt with all of that.”

Turnbull said his and Welch’s relationship allows them to feed off each other’s energy. He said he is easily influenced by Welch’s attitude.

“He keeps me wanting to be proactive and ambitious,” Turnbull said. “Sometimes when I have students who are less motivated, I get lazy myself, so I really like working with him. I like that he challenges me and pushes me, and I think I push back, and that is a good synergy.”

Welch’s friend, senior Andrew Sowers, said while Welch is accomplishing great things, he still has a child inside of him.

“He’s still got that like ‘I’m a little kid’ kind of mentality, but he can talk at a senior level about a concept and it makes for interesting interactions,” Sowers said.

After graduating, Welch said he plans to take some time off and get a software engineering position somewhere before attending graduate school.

Engaging and stimulating projects are Welch’s main criteria for a job, he said.